Speaking of haircuts, first thing I did today upon returning to the rabbit hutch was bring about the following radical transformation:

Yes, managed to ditch the stupid face as well. (just be quiet, you)

Arrr jimlad ’tis good to be back up here, not that it wasn’t lovely down there, but up here I was greeted at the station by a dazzling *cough* who looked far too cute to be the kind of girlfrind I could blackmail into becoming attached to me, but it turned out she was my girlfriend and apparently there was only free will involved when we got together, 6 months ago yesterday, so that made me happy. It’s all going soooooooooooo well tee hee snog snog.

Having deprived my fleas of their luxury apartment on top of my head, it was pizza making time here in the Courtyard Cupboard – a courtyard which due to the fact that it’s easter is earily quiet. Actually, it’s great, we have the whole flat to ourselves, which meant that we could use Andrew’s Pizza-Cutter without asking! Ooooh the pleasure of the sharp wheel. Reminded me of a James Bond film, or was that a rotary saw the baddy used to cut people’s head’s off? Pizza cutter, rotary saw, it’s all the same. Although I suppose the latter may make a bit of a mess of the chipboard work surface. *Cough* actually found a use for the pizza cutter that I hadn’t thought of – playing golf, in typical Japanese-salary-man-at-station-with-umbrella style. Anyway, please admire our pizzas. 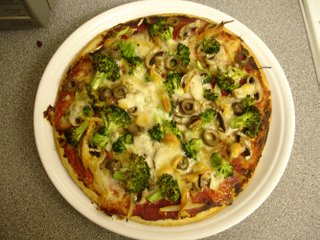 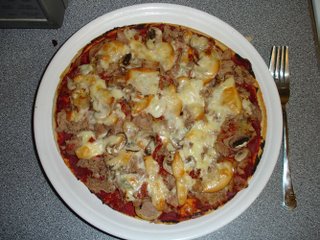 No matter how hard she looked, *cough* just couldn’t make the pizza’s cook any faster with her laser-eyes

Meanwhile, back in my dad’s greenhouse, there were some dead flies, and I just couldn’t resist taking a photo of them with my thermal-imaging camera. 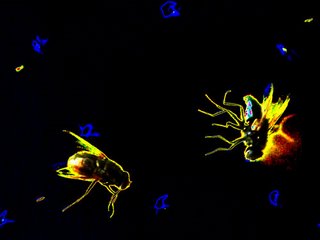 I must say I’m feeling a lot happier than these flies were (probably) feeling just before they died of solvent abuse. In fact, I’m feeling so happy that I may be sick… last night, having watched The Italian Job (1969 original, bloomin marvellous), I couldn’t bring myself to switch the TV off, what with only getting a chance to watch it once or twice a year. Anyway, it just so happened that there was a film starting on BBC1, called “Simply Irresistible”.

The review in the Radio Times, which gave it one star, said,

“This is possibly the most innapropriate title for a film ever, as this horrendous movie is utterly resistible…”

Essentially, the whole story revolved around a woman whose New York restaurant was going down the pan, until one day, some strange man insisted that she buy a crab from him. However, this was no ordainary crab, oh no, this was a magic crab, and soon, not only was her failing restaurant back on track, but also she’d landed herself a high-flying boyfriend.

“Hmm, yes, a magic crab, sounds like a great focal point for a best-selling movie…let’s go with it”

It was, in my opinion, a pile of poop. …And yet, I absolutely loved it. I was utterly taken in by this fledgling romance, a story of love between two individuals from utterly different walks of life. One Japanese, one British
One a damn sexy neighbourhood restaurant owner, the other a multi-millionaire who used to be in Ally McBeal.

Anyway anyway, the point of all this is to say that I feel pretty much like the main character, apart from my arse isn’t quite as cute as hers and I’m not an American woman in my 30’s, and there ain’t a crab in sight, just a damn sexy *cough* who’s floating as high as me.