Until yesterday, I’d only been to Liverpool once.

I was about 16 at the time. Attempting to be a wild child. Dreaming of being a cowboy, galloping after some freight train onto which I would jump from my steed. Not quite sure why, but it seemed terribly romantic at the time. Too many Sunday afternoons spent watching Channel 4, that’s what it was.

The reality of my own ride on a freight train was a little different – 5 hours cramped in an open-top wagon on a freezing cold night, ending in a high-security British Steel compound just outside of the city that is famous for the Beatles, two football clubs and Fred the Weatherman.

Anyway, so it was that yesterday, 12 years older and wiser, I made my return to the Mersey (this time arriving by Virgin Trains, which was marginally more comfortable than afore-mentioned freight locomotive). I also happened to be accompanied by *Cough*, who incidentally is still only eating for one, and who was on her way to one of my least-favourite cities in Europe, that being Milano. I think it was the way people parked their cars that really annoyed me. Over there, when manouvering in or out of a tight space, it is common practice to only apply the break after one sees the car in front/behind actually move as a result of one’s own car making contact with it. Oh, and it’s in Italy as well. Ok,ok, NORTH Italy. I have an idea that the South is actually quite nice, but having never been there, I can’t be sure.

I suppose my dislike for Italy first began in 1997 when I lived just the other side of the Alps, and had an Italian manager – Mr. Teiglia. I doubt that a more bad-tempered person exists on planet Earth. I swear that in his bedroom he had a sign on each wall reading “wrong side”.

I was shit-scared of him. Literally. I remember my first day as a waiter: I’d waited 30 days for my visa, slowly becoming more and more nervous, until on the evening itself, I found myself with horrendous diarrhea.

The worst times were when the Japanese numbered over 250 – that meant that there weren’t enough of us Service Staff, and we’d need HIM to dish out the soup. It’s bad enough trying to balance 3 bowls of soup on your arm whilst navigating through the equivilant of Shinjuku Station during the rush hour without some red-faced bad-tempered old git shouting at you in some language you know nothing of. I suppose it was inevitable really – stuck up the mountain for years on end with nothing but two mangy alsations for company. They only added to our fear.

I was delighted, upon returning to the Alps 3 years later, to find that Herr Teiglia had gone. It was only after a week or so that I discovered that his replacement was, Herr Schmidt, was an alcoholic, and had been known to use physical violence against staff when on a bender. The fun had only just begun…

Back to Liverpool, where *Cough* and I are checking into the rather grand Adelphi Hotel. According to Lonely Planet, the Adelphi was once considered one of the world’s grandest hotels, and it’s easy to see why. With a vast lounge area, lit by some rather impressive chandaliers that would look wonderful crashing to the ground in ‘Die Hard 8’ (or whatever they’re up to), 400+ en-suite rooms which, if they all resembled ours, were rather nice, and a club called “Wave” (the literature read “Wave is the latest craze to sweep the UK. Come and check out our amazing lighting and sound system”. We did venture down to the basement to try and get some shots for the benefit of you, dear readers, but the lastest wave to sweep the UK was hosting a WI conference…). 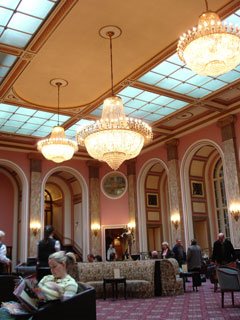 Apart from the dissapointment in connection with Wave, and putting to one side the appalling manner of the receptionists, most of whom couldn’t even speak English (or Russian, see below), oh and apart from the buttons on the lift that made noises like fire alarms and scared the poop out of you, it was a bloody nice hotel. (NB: Since ‘bloody’ has been allowed by the Advertising Standards Authority in connection with the Ozzie tourism ad I have decided to add it to the vocab allowed by the TGW auto-censor).

The bath was without a doubt the biggest I have ever seen in the UK. Of course what this could have meant was having to wait a few hours for it to fill up – but oh no – check this tap-action out:

Impressive or what? I think it only took about 3 mins to fill. In fact, it’s almost enough to inspire one to start a bath-filling league table.

TV! There was a TV!! I was glued to it, having not seen such a machine since January. Watched some pretty groovy BBC wildlife programs, Eastenders omnibus in which Grant and Phil nearly got shot – gosh, I couldn’t take my eyes off it.

In the evening we went in search of some food, but all we found was this HUGE Chinese gate, the biggest in Europe apparently. 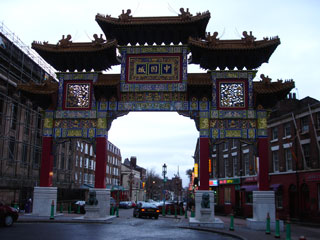 Rather pointless though I though, seeing as (a) there weren’t any guards and (b)one could easily walk around it rather than going through the middle (in the case that it had secret lazer beams that would trigger some portcullis-type-affair) (ouch).

Other things we bumped into during our 24-hours in the European City of Culture 2008: some very impressive Greekish buildings just outside Liverpool Lime Street, a pretty decent (free) museum complete with genuine samurai suits of armour dating back to the 15th century, a very tall tower, The Tate (doesn’t even touch the Tate Modern in London in my view), some very strong winds, lots of cranes, some very depressing shopping centres full of burberry and lots of boarded-up shops. 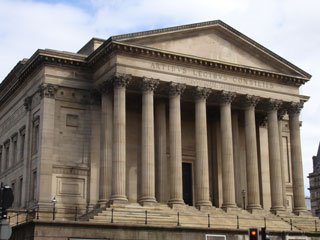 Overall, my opinion regarding Liverpool is now this: If you’re thinking of going there, you’d be better off waiting until 2008 when it becomes European City of Culture. As it is at the moment it’s pretty depressing, and reminds me of Sheffield about 10 years ago (not that I’d ever been to sheffield before 2004 but that’s beside the point). It’s a city that has seen its main industries collapse (most of the Beatles are dead I think), and is struggling to reinvent its identity. Sheffield was just the same: it had long depended on the steel industry for its survival. With the decimation of that in the last century it had to reform and become service-orientated, something which in my view it has done remarkably well, with some really nice new developments right across the city and lots of happy people (mainly rich students from other areas…). In Liverpool they seem to be just starting out on the first stage – that being demolition. There’s a huge project going on down by Albert Dock (Fred the weatherman is no longer in sight – perhaps he fell in? Or was he pushed?!), but there still remain streets of boarded-up shops and roofless houses – see my photo album for the photos (when I get around to uploading them). I bet the Japanese government is highly envious of Liverpool – all that potential for the laying of new concrete.

Another word of advice for those thinking of visiting the city – take a dictionary. This way, when people talk to you in Russian (that seems to be the language of choice in that area, unless I was very much mistaken and it was actually a strong accent masking some form of ungrammatical English) you can ask them to point out in the dictionary the words that make up their incomprehensable sentances.

Now, I admit, I don’t have the best of ears when it comes to accents – notable examples include my shock at discovering that they spoke French in Glasgow (it was actually just Glaswegion English), and the incident last month when I had to get my Japanese girlfriend to translate what the girl in Gregg’s The Bakers was saying (“Cheesenbrokli”). Nonetheless, I cannot accept the idea that that was English that I heard spoken in Liverpool.

I can only assume that the Russians came over to sell Vodka in the 17th century and never left, as they liked the Beatles so much.

So that’s Liverpool for you.

I think it is important to point out that there really is hope for the city, especially if one compares it to, say, Berlin in 2001.

Note the similarities? Berlin is now a damn sexy city with a well-groovy vibe – whose to say that Liverpool will not follow in its footsteps.

Watch out for my follow-up report in 2 years time.

Oh, incidentally, I found another two horse cocks to add to the TGW collection (for those of you who are not aware of it, ‘horse cock’ comes out at no.1 in the table of search-terms entered into Google that result in TGW being returned). Metal this time, for a change. 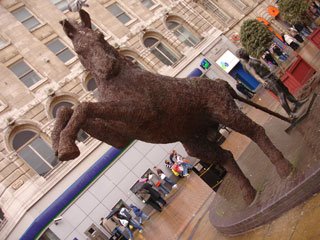 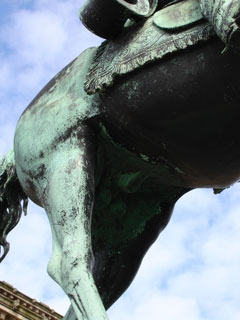 *Cough* and I have gone our seperate ways for a few days. As mentioned above, she is now in Milano, and I am here, back in the comfort and seclusion of the Welsh Garden Project, where for the next week I shall wield my shovel and spade and construct a new deep bed.