Every year, the President of the University Union presents 5 students with “Centenary Awards”.

My very good friend Will Christophers (who is responsible for introducing *cough* and I to one another) has been an absolute star these past two years, doing more than anyone else I know for the benefit of other students.

Thus, I nominated him for a Centenary Award, and I’m delighted to say, the panel of judges agreed with my opinion (as stated below) that he should be one of the very few students to be presented with the award.

Congratulations Will, you are truly deserving!

“It can be said, without a doubt, that Will Christophers has contributed more to the improvement of the student body than any other individual within the Student’s Union.

In his role as president of Japan Society, Will has worked tirelessly for the benefit of both Japanese students at Sheffield and non-Japanese students interested in Japan. His irrepressible energy, imagination and sheer hard work have resulted in the creation of an incredibly strong supportive network amongst students, which has been nurtured through the organisation of events such as Japan Day, a hugely successful festival, the initial idea for which was entirely his own.

In addition to this, he has sought to offer employment to International Students through his Will Yaki business which last year won the White Rose Business Competition – students who might otherwise find it difficult to obtain employment whilst in Sheffield. Furthermore, he has created the “ChoCho Collection’, a series of postcards featuring his own artwork, and that of local students and other artists who struggle to find an outlet for their work. The profits from this are donated to charity.

Will has been a true inspiration to many students throughout his three years here at Sheffield, and I can think of no one other person who is more deserving of the Union Centenary Award than him.”

On the cutting edge this Daily Mumble is you know.

Look, I can now even provide you with the 2D barcode that is widely used throughout Japan, and will no doubt reach our western shores in about 10 years.

Do me a favour if you’re in Japan – scan this code with your mobile phone and let me know if it brings you back to this page.

You are being watched

Recently I mentioned the fact that on my way home from Uni I am tracked by almost 3 billion CCTV cameras positioned at strategic locations along my route.

Well, yesterday I just flipped. I could no longer take the intrusion into my privacy. It’s bad enough having fingers that insist on telling the world everything via the www, let alone constantly being watched from on high.

Thus, I removed my faithful Tilley Hat (that is yet to be eaten by an elephant 3 times) from my head, and cast it, with deftest precision, into the vast blue sky, where it hurtled in the direction of the latest predeter-camera… 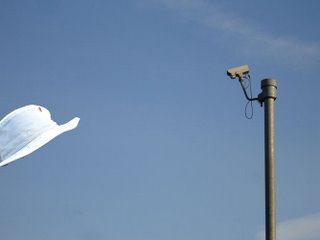 …and missed, flying straight over the top of the camera, landing on the roof of the University of Sheffield’s Octagon Centre that lay right behind it. Curses!

Oh well, I guess wearing it wouldn’t have made today’s trip to the dentist any more pleasant.

My head is full of letters

Well, if you will go and sit inside a postbox for 3 hours with your mouth open joseph…

Ok, so not quite. It’s this Year Abroad Project proposal. My head is full of English letters making up words in the English alphabet, 2600 of them so far, and somehow I’ve managed to spend a whole day talking about crime figures. And accidentally printing out 2 copies of various PDF docs.

Oh, but we did go for a walk in the park behind the library. Was lovely! Saw duckies, birdies singing, daffodils, sakura (cherry blossom), and a couple almost-shagging on a bench …and a man with a camera with a very long lens the other side of the park pointing at said couple.

saw the above postbox too, which looked so red, against the green green university grass.

I just learnt that there’s no noun for ‘hug’ in Japanese. Ah! Another thing to add to the cynic’s list.

Spent three hours photocopying in the library today. 400 pages of text. A lot of money, a lot of trees. 4 week’s worth of classes. All covered. I figured, if I did it all now, that would mean (a) less time spent faffing around during term time when the pressure’s really on, (b) all the books would be in (all but two out of about 20 were) (c)less having to face my project today. Tomorrow is printing-out-PDFs day, have to take out another loan for that. I just can’t do the reading-off-the-screen thing. Takes ages to wash the highlighter off afterwards.

I managed to download a driver for *cough’s* webcam today. She sits at an angle of 90 degrees to me at the end of my desk, sitting on my bed – I sit on my chair. The camera is clipped onto the top of her laptop’s screen, and is plugged into my USB port. This way, I can keep a window open on my desktop showing a live feed of her cuteyness, so i don’t ever have to take my eyes off the screen. Just have to buy a 2nd webcam so she can do the same, then we can communicate entirely digitally. You see – technology really does bring people closer.