In Shinjuku, central Tokyo, there’s a HUGE advert for Epson (I can only find one photo of it online, here). It’s been there years. Big flashing light thing several stories high. Makes you wonder how they can afford such a thing in such a prime spot.

I’ll tell you how – BY RIPPING ME OFF! Right so I had this Epson printer, and about 8 months after I bought it, it packed up. I took it to the university’s computer repair place where I was told that in order to run a diagnostic wotsit on it, it would have to have to have genuine Epson cartridges installed, not the cheaper versions I had. Let’s just think about this for a moment. 4 cartridges (Cyan, Pink, Yellow and Black) at 20 quid a shot, that’s 80 pounds. Price of new printer? 60 pounds.

Anyway, so I bought a new printer, the Epson C66. It worked ok for about a month, and then for some bizarre reason suddenly decided to stop using yellow ink. No matter how many times I cleaned the damn thing (each time using quite a bit of ink of course), it just refused to be add the vital 3rd colour to the set. Great, I always did want full-colour photos, in purple.

That happened about a year ago. Since then I have only ever used black ink. In fact, I have made a point of clicking on “properties” in the print dialogue box everytime I print something and selecting “Black Ink Only”, even if the document is just a B&W Word document, in order to avoid the costly replacement of the colour tanks. Despite this, I have had to replace the full set at least 3 times… WHY???? I have not seen a single pixel of coloured ink emerge from the damn thing in over a year, and yet it continues to insist on getting through 15 quids worth of (imitation) cartridges every couple of months. OOOOOOOOOOOOOhhhh it makes me so angry. What makes it even worse is that the PRINTER decides when the cartridges are empty, and not ME. Thus, if I buy the special long-life cartridges (that contain less air than the usual ones) the printer will still tell me to replace it after the usual number of pages, even if the cartridges are still half full. Mottainai! (as they say in Japan.)

Mind you, the past few weeks have seen a real battle of wits between me and my printer. You see, after the 10th June, I shall not need to use it for about 15 months. I really don’t want to leave it with full ink tanks installed becuase no doubt by the time I return, the Epson Pixies will have popped by and refilled their fat little bellies with my ink. Thus, when (about 5 weeks ago) I noticed that all the ink tanks were close to empty, I realised that I had to somehow make the printer think they were full until the end of term. In order to do this, I’ve had to use tecniques like printing without turning the printer on, and instead moving the print head backwards and forwards across the paper and giving the ink tanks a tiny little squeeze at the appropriate moments. Its made for some interesting printouts I can tell you. I hope my lecturer could read that essay. I put a note on it saying the font was “Epson Cursive”…

Anyway, I must admit, I do feel somewhat smug at the moment. Here we are, end of term tomorrow (i.e. no more printing needed) …and check out this stunning sight: 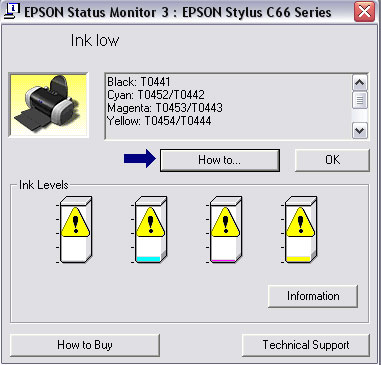 How about that for timing. And it’s still printing you know, should I be hit with a sudden desire to do some printing.

In Other News,
Got the results of one of my two essays back today. 67. That’s ok, and is higher than I was expecting as it was a bit of a rush job. Too much reading, not enough careful planning and writing. The conclusion really let me down too, as it did in last term’s essays. Still, if I do ok in the exam for that module I should get a high II:1, which is ok. Language tests etc are going ok so far. I think I did well in the presentation project, despite pressing the button on the remote too many times and mucking up my powerpoint show, forgetting all my words and going bright red. I’ve got either ‘A’s or ‘A*’s for all my weekly homeworks, and today’s listening test was easy peasy lemon squeezy. I thought sensei was being really generous by giving us such an easy run. And then me thinks, maybe this is all deliberate. They really don’t want us to fail because that would screw up their relations with our Japanese partner institutes. Likewise with the National Union of Teacher’s industrial action. We were told today, unofficially, that it is highly unlikely that we would be prevented from going abroad next year, even if our exams weren’t marked, thus, we are basically unaffected by the row that is causing many students a hell of a lot of grief.

Tomorrow’s Kanji test will no doubt be horrendous: remember this is the one that I got 2% for last semester!

After that, I’ve got two weeks to revise, then the Proper exams start…