I’ve always had this image of Newcastle as a grim, cold, Northern city, where grey is the the order of the day, people only smile when they have to, and trains only stop there upon special request and upon the proviso that police are present to prevent anyone getting on.

I was wrong. In our survey of Cities of the North, which has involved trips to Liverpool, Leeds, York, Sheffield, Newscastle and Manchester (Station), *Cough* and I have found Newcastle to be perhaps the Number One city of choice to live in, were the situation to arise where we HAD to live in the North of England. Leeds is all very nice, but is a bit too much like any other city, just lots of shopping centres. You’ve had my review of Liverpool – give it another few years, bring back Fred the Weatherman and it might be OK. Sheffield has a great university and some nice new developments, but the council seems to be doing little to help the huge underclass. In the Devonshire Quarter, where I live, there are quite a few homeless people and drunken tramps – but all the new housing is ridiculously expensive “Exclusive 2 bed Apartments” of which there are tons already. I think the space could be better used for shelters and community projects, but there you go. York is a pretty city, but not really very real, as it is full of vikings. I couldn’t live somewhere where you run the constant risk of having a viking lance poked up your backside when queuing at the checkout at Tesco. Manchester, well, I suppose I haven’t really been there yet. I’ve been to the various stations, and admired that huge erection going up in the city centre, but other than that… I think the fact that the city is so football-mad is a bit off-putting, it suggests to me that the schools there aren’t very good and all the boys end up playing truent, kicking a football round in the streets. I mean, look at Beckham’s IQ, shocking how anyone could actually make it through to adulthood with such a condition.

So this leaves us with Newcastle-upon-Tyne. The centre has nice wide pedestrianised streets. In addition to all the usual chain stores there’s some nice local cafes and wotnot. Very pretty park just behind the cinema. Interesting bits of street furniture such as this Lino mat, 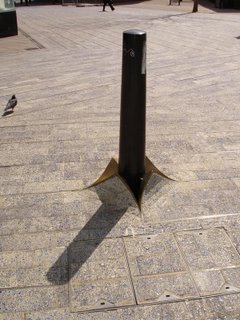 (no giant horse-statues to add to my collection though), people who speak in an amusing accent (they must have Geordie classes at school), oh, and then there’s Gateshead. I always thought Gateshead was a seperate city, but it seems I was wrong. From what I can gather it’s just the name of the area around the river Tyne …but it certainly deserves its own name, it’s definately worth a visit. In addition to the huge mirrored bug on the south bank, there’s the fabulous Millenium Bridge. It’s shaped a bit like an eyelid, and has an ingenious tilting method the likes of which I’ve not been before. 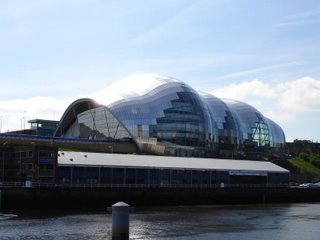 At certain times of the day, that is, certain times of the day that we managed to miss on two occasions, the bridge tilts to let boats through. The archway that you see reaching up into the sky goes down, pulling the the pavement bit up – ingenious. I would have liked to have seen that, hydraulics turn me on like very little else can…

So, Newcastle, go there when you get the chance, while the paint’s still shiney.

Anyway anyway, about the meeting. As the train pulled nto Newcastle Station I asked *Cough* not to say anything embarrrasing about me, not to tell any tales about my past that would shock her sister and her boyfrined. I needn’t have worried though, as within about 30 minutes of our arrival I’d managed to do the job myself. Things could only get better.

Thankfully they did. In the 7 or so hours that the four of us were together we got to know each another quite well, and by the end of it all there was bit of cheekiness edging in. The topic of next-year’s housing arrangements was raised (by *Hiccup*). I think she was rather dissapointed by the news that *Cough* was considering living with me and not her, but she took it very well and didn’t stab me through the heart with a chopstick, having left them in Japan. Incidentally, *Hiccup* is indeed quite crazy, not your average Japanese (to use an appallingly Reischaueresque label), a fact that I find quite reassuring. We sought her advice on what the folks would think of us living together. There may be a bit of dissaproval initially, but if *Cough* is supporting herself (or living off my Scholarship!) then they should come to accept it.

Overall then, a Grand Day Out. We now await the fallout from *Hiccup’s* report back to the family when she returns to Japan later today.