Ah, curse my status as a British student! …for with that label comes the need to go binge-drinking now and then, a practice that not only leaves you being sick in your course-mate’s toilet, but also leaves you utterly incapable of doing anything that requires the use of one’s brain (luckily for you that doesn’t rule out Mumbling).

Having said that, it was a bloody good laugh. *Cough* and I went round to Lar’s place last night, just a few of us eating, drinking and reading magazines like Men’s Health, a publication full of notions of masculinity that are entirely alien to me.

Anyway, as you know, I don’t usually drink. No neeeeeeeeeeed. Still, none-the-less, it is jolly good fun to get completely rat-arsed now and then, especially these days as I’m so happy that it results in me being exceedingly silly and rather funny (her words, not mine, possibly prompted by the fact that I publicly showered her with compliments whilst under the influence of a whole bottle of white wine, which was drunk in the space of about 45 minutes). I’ve been hearing tales today of other things I got up to, of which I have absolutely no recollection. Thankfully nothing too regretable, and no bruises from when I (apparently) fell over.

Lars was also very funny – and very accomodating. He has had a clean toilet too.

Today was a slightly different matter though. I felt rough. Had that morning burst of still-drunk energy, during which we went to buy orange juice. Then it was back to bed for four hours of BBC Radio 4 Podcast therapy – a cervival cancer exert from Woman’s Hour, 3 episodes of the wonderful From Our Own Correspondent, oh, and Digital Planet, in which I learnt about the mad and I think very sad case of South Korea, where 80% of the population are on broadband, and 1 in 3 people are members of a ‘virtual world’ where you ‘buy’ an empty ‘room’ from some online company, and then spend days and days ‘buying’ stuff like wallpaper, carpets, photos, bedspreads, then invite all your friends round to ‘visit’ your room. You can also visit theirs, leave messages for them etc. What a waste of people’s time. They’d be far better off using it for constructive purposes, such as cutting holes in the perimeter fences of US military bases, and sneaking in at night with big bags of Tate & Lyle sugar to put in the fuel tanks of army trucks.

Yes, so there you go.

ooh, watched the 2nd half (tee hee) of Sex and Lucia as well, which I liked a lot, superb cinematography. Love the light on that island.

So yes, not a lot of study going on. I must be careful not to get complacent. Thing is , we had three mock exam-type excercises last week, and I found them all pretty easy. Thus, I don’t feel at all worried about my language exam on the 2nd June, and thus, I don’t feel inclined to revise. Of course, this is very dangerous thinking, and no doubt were I in 1930s Japan or 2000s Singapore I’d be arrested for even voicing such an opinion. 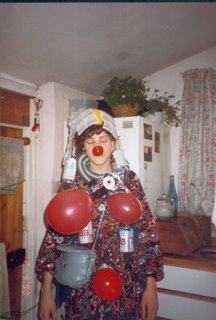