Big decision made as to what I am going to achieve this summer:

I am going to learn the MEANING and WRITING of 2,042 kanji.

How? I’m gonna use the Heisig method.

An extract from an interview with Heisig:

“I broke the kanji up into pieces. I began with the simplest pieces, went through the entire list, saw what I could make with it, add another piece, and then go through the entire list of kanji once again. I kept a little diary of what I was doing, and exactly 30 days after I started I had finished writing all the characters, I had learned them all. Then the word got out at school.”

Needless to say, the Japanese language teachers poo-pooed his method, saying he had a photographic memory …which he didn’t.

I’ve talked about the Heisig method before now, but no matter how much exposure it gets, it deserves more. I first started using it in 2003. Unfortunately, I was in a very bad space at the time, and my motivation soon flew out of the window. But not before I’d learnt the meaning and writing of 300 kanji in 3 weeks.

What I learnt in those three weeks has really helped me over the past two years at uni. Whenever we have learnt kanji using the standard methods adopted by Japanese language teachers that I previously looked at through the eys of Heisig, I have had no problems remebering the meaning and writing.

The book is worth buying for the introduction alone! Talk about inspiration…! You must read it!! In fact, the whole of section one of the book is available for download in .pdf format – I reccomend you at least read the “Notes to the 4th edition” which is enough to make anyone feel they can conquer the kanji! Download it here

Unfortunately, the Heisig method is not compatible with the classroom. It is a method for self-study only. And, as you don’t learn the readings until Book 2, it’s not much good for those grammar classes where you have to read out loud. However, if you put aside short-term goals of passing exams, and think long-term (i.e. being fluent in all kanji), then the Heisig method is so superior to the standard methods of teaching that it deserves to be awarded a night in bed with me.

So, here I am, 3 months without university work. The perfect opportunity to learn all 2,042 kanji – 3 months is how long it should take given about 4 hours of study per day, which is what I intend to put in over the next 10 weeks (with a couple of weeks off here and there). This way, when I get to Japan I don’t have to waste hours learning kanji when I could be doing far more exciting things. If I can recognise and write the characters already, the readings will come a lot easier.

James W. Heisig – Remembering the Kanji – Buy it / read reviews on Amazon
Read another review here and another here. Interview with James Heisig on how the method was born, here

Download a kanji review program designed specifically for use with the Heisig method here. This is a GREAT tool and makes the learning process much easier (an electronic pad and pen for your computer is a must, 15 quid from amazon).

Also, try recording your stories onto MP3 and putting them on your iPod. I’ve found that very beneficial.

Update – 5 months after starting the course:

So, by week 10 of my study program, I had managed to learn the entire 2042 kanji using the Heisig method. Admittedly, many of them were a little haziy in my memory, but I found that after one review they were straight back there, I could write them no problem.

I then did absolutely no proper study / revision of the kanji for about 10 weeks, due to everything involved in coming to Japan.

I’m now 8 weeks into my Japanese language course at Rikkyo university, Tokyo. I had this idea that once I got to Japan there would have some amazing kanji-learning tecnique, but of course there isn’t. Just like back home, it’s a case of “here’s the kanji you need to know, now go and learn them”. They do have kanji tests, but these are voluntary. I failed the first one (you need 75% to pass) due to lots of really silly words like “semiconductor” being included, and found that in the end the whole process was most unpleasant and utterly demoralising.

I then approached my sensei and asked her what she thought about Remembering the Kanji. She basically said that she thought that using the Heisig method was a very good idea – if it worked for me, I should use it.

It is astonishing how these kanji are flooding back to me. I must admit that when looking at the kanji for the first time in months I am lost – I can’t recall the meaning. BUT, one quick look at the story associated with it and BAM! it’s back in my head, as fresh as a daisy.

The next task of course is to learn the readings. Unfortunately Remembering the kanji Volume 2 (which teaches the readings) is currently out of print, although the author, James Heisig, told me in an email (what a thrill that was!) that they are due to be reprinted early next year (2007). There are copies out there on Amazon etc, but they are very expensive. I’ve managed to locate a copy in California for 6,000 yen (£28), but it’s taking its time getting to me.

Basically, the message is, I continue to thoroughly recommend the Heisig method as the best way out there of mastering the Kanji. It brings them alive, and makes you love them!

Fruits of our labour

It’s about three years now since I first arrived at the Welsh Garden Project. It was a complete jungle then, having been left untouched for many years. My task has been to beat back the brambles, and help restore its former glory.

Thus, today it was immensly satisfying when one of the Ladies of the Manor harvested her first beetroot and carrots, which were planted not that long ago in a deep bed that I created in January this year.

Just look at that colour. Boodaful! 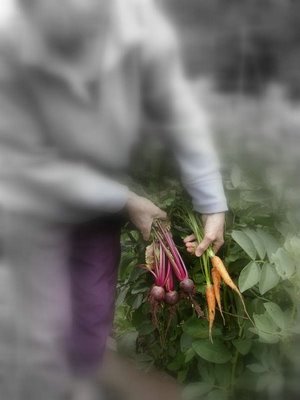 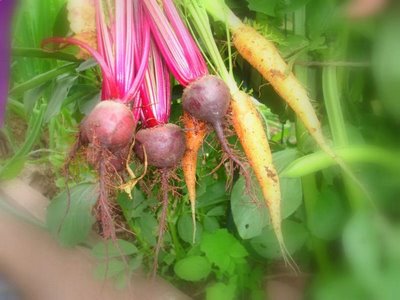 Look what the cat’s dragged in

There I was, merrily skipping through the house and into the conservatory where the chainsaw spanner is kept, thinking what a lovely day it was and how shiney the sun looked, when I nearly trod on this…

It’s not all pulling out brambles, oh no. As you can see in this video, I’ve also had time to reconstruct an electric organ with a sledgehammer. That was fun!

Whilst in the garden today, I learnt about the tragedy that is Sierra Leone, a place about which until now I knew nothing except that it has the world’s shortest life expectancy (@25.9 years). Learnt that in a Japanese newspaper class. I also heard about the horrendous land-grab currently going on in China, “Worse than the Japanese invasion of the 1930s”, and similar crimes in India and South Africa. All very grim. Makes you realise how blessed we are in the West, with our relative security and access to social welfare. The inequality in this world is just staggering.

Hmm, on that happy note, I’ll be off.

“Dear exchange student who is nominated as JASSO scholar,

This is to let you know that you are officially granted the JASSO Short-term Student Exchange Promotion Program Scholarship.”