A month and a day ago I wrote about dear John John. I had just received a phone call from a family friend telling me that JJ was not at all well; he had just been diagnosed with terminal cancer. This came pretty much out of the blue, a month or two previously he’s been ok, but then came down with pneumonia – it was this that had brought him back to the UK for treatment in the first place.

Tonight, I received another call, to let me know that John John passed away this afternoon.

I don’t know what to say as I can’t really think. I can’t quite believe it. The idea of him not being around just does not fit in with my reality…

I was able to speak with John but 36 hours ago, something I am very grateful for. He was very sweet, so gentle and kind, asking me how I was, and telling me to give his love to my ‘better half’, *twinkle*, whom he met a couple of weeks ago.

John John, you will be sorely missed. You have been an integral part of my Japan ever since I first went there, and a big part of my warm feeling for the country stems from the welcome you always extended to me whenever I visited. Your memory will live on for many many years.

You will be sorely missed. 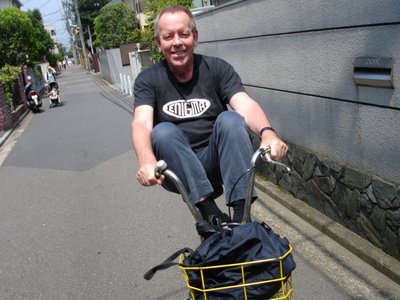 John John on his famous yellow bicycle in Kichijoji, Summer 2005.