I’m off on a day trip for the next week or so. I’ll be going from here to Sheffield by Virgin, in order for *Twinkle* and I to make up for lost time, and hopefully get out into the Peak District which I have managed to avoid thus far despite having been wanting to go there for the past two years whilst living but 20 minutes from the place. See a film, do a bit of study – should be good.

After that it’s off to London to get my visa for Japan. All documents sorted, application form filled in, date set for departure (4th Sep) thus the new little countdown thing top right which had me hitting my keyboard with a mallet for a couple of hours earlier tonight as I struggled to do the maths behind the code that automatically generates the number of days left. Accomodation is sorted too. I won’t be having any jabs – I heard that the uni health service was reccomending some which I think is absolutely ridiculous, this is Japan we’re talking about, not sub-saharan Africa. I strongly object to the culture of vaccinations. Just like the over-use of antibiotics. Having said that, “serious inflammation of the brain, which may lead to permanent brain damage” does not sound like much fun, so I take back what I said above. My friend who’s going to be in the far south-west of Japan probably has made the right decision after all!

Much of today was spent moving huge great logs, and raking in the hay. The latter reminded me of the summer I spent doing just that in the Hobbit-shire like surroundings of Luzern, Switzerland. Shame I didn’t have my amazing hay-wagon with it’s 12 forward gears and 12 reverse gears. Still, I did have my bent rake. 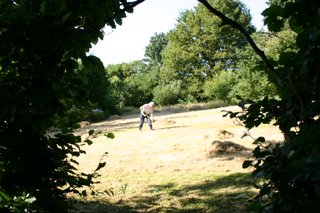 I was very naughty tonight and didn’t do any kanji. I did some revision this morning using the free software that accompanies Heisig’s book and my electronic tablet pen thingy , and listened to lists of vocab whilst working in the garden (I create a daily playlist for my iPod which has about 30 tracks, alternating between kanji revision and 20/30/60 minute radio programmes) …but I haven’t learnt 50 new ones as I should have done. Naughty me. I’ve covered 800 so far, and am happy to say I remember the meaning and writing of them all.

Time is whizzing by.

It will be really nice to spend some ‘quality time’ with *Twinkle*. Unfortunately she is in the middle of writing her dissertation on – guess what – Intercultural Couples, so does not exactly have a lot of free time. But I’ll do my best to distract her. I mean, she can put any ‘interaction’ between us down as “field work”, right?

John John remains very much in my mind, much of the time. I don’t think the reality of him not being around will really hit me until I return to Tokyo, where I’m used to him being. Only then will I be able to let go.

Well, it’s late, and the Welsh Garden Project Site is hosting a party tomorrow for a gaggle of 13-year-old ladies, and for which I must help prepare.