Last weekend I was fortunate enough to be in the UK when my two best friends Jo and Catherine (whose middle name is Joanne), and Jo’s boyfriend Joe (I kid you not) decided to have their birthdays. Usually, they time their annual exploits to coincide with me not being here. 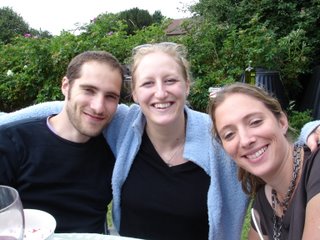 Happily, this year, Joseph’s in da area. (yo WIGGY!)

The festivities also happened to coincide with the Hereford Beer and Cider Festival, held on the banks of the river Wye. Naturally we couldn’t afford to miss this opportunity to support local breweries, and so with a hop, skip and a jump headed on down to the marquee next to the rowing club. (Incidentally, that’s not the rowing club where, when I was 10 years old I took a canooing course, and was mistaken for a girl. Even after 6 weeks they still thought I was a girl and made me change with all the girls. I was too shy to say anything and so went to great lengths to hide my willy…)

I’m not terribly good at making decisions under pressure. Thus, I knew that when it came to be my turn to be served I had to be absolutely certain about what I wanted. I scanned the labels on the huge selection of barrels on the rack behind the temporary bar. Old Rosie. Westons Traditional Organic. Brewer’s Ace. Hecks Kingston Black. Ah, decisions decisions.

I finally made my mind up, going for Dening’s Medium. Now I just had to wait my turn.

Eventually, after an eternity spent watching an argument between the drunk bartender and a man with a belly the size of one of Saturn’s moons, (who DID say he wanted Perry not Cider), my time came. The bartender looked at me and grinned a toothy grin.

That threw me. I’d been expecting him to ask me what I wanted.

It was no good. I was overcome by blind panic. How was I to deal with a direct question following an opening like that? All my careful forethought into which cider I’d have flew out the door of the marquee at the speed of a Golden Eagle that has just accidentally sat on a rocket-propelled firework on New Year’s Eve in central London, ignited by remote control on one of those barges in the middle of the Thames

My eyes whipped down the line of kegs, desperately seeking out the answer to his question, which now seemed like it had come straight out of a molecular science exam paper rather than the mouth of a drunken Herefordian farmer-cum-barman with all the intelligence of a pair of green welly boots.

I blurted out, the name being the only one of the many displayed strong enough to fight its way through the mask of terror in my head.

Toothy turned away, filled my glass, and took the pound coin that I had carefully sought out beforehand.

Walking away, I ran through the sequence of events that had just taken place, and asked myself why? I mean, I’d already made my decision so as to avoid the trauma of being caught off-guard. The fact is, I am no stranger to this kind of situation. I do find it difficult to deal with situations like that, i.e. ordering drinks at a bar. Perhaps that’s why I do so little of it. It’s the same with the supermarket, I loathe keeping them waiting as I fiddle around with change. In fact, in a myriad of situations I run through conversations before embarking upon them, sometimes weeks in advance.

I said, before taking a sip and almost falling into the river.

OMG. It really is Old Goat.

They have taken a goat, pickled it, and then put the resulting (murky brown) liquid through the cider-making process. The result? A drink that is strong enough, and foul enough, to make your tastebuds, stomach and liver wish that you had opted to be the first ever person to have their lips sewn up to raise money for the Italian charity organisation NAPeLS THaTHELSU (National Association for People Who Like Silence and THErefore have their Lips Sewn Up).

It was vile. Like gone-off snake venom, only worse, and more painful. I couldn’t take another sip, and so poured it onto the grass, then watched as the worms emerged writhing in drunken agony, wishing that a blackbird would come and swallow them whole.

Needless to say, at the BBQ the following day I was not drinking. No, it was orange juice for me all the way. That helped my recovery quite a bit actually, and by about 4pm, that’s 28 hours after the lethal dose of fermented goat entrails, I was feeling pretty good. In fact, I’d recovered to such an extent that I was the best stilt-walker out of anyone in the garden. 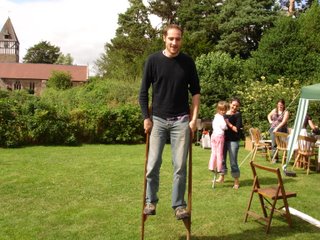 I proved to be quite a hit on the Pogo stick too – until I accidentally bounced off the concrete patio and onto the lawn: the stick shot down 3 metres into the carefully tended turf, hit a water main and flooded most of Herefordshire. Naturally, I ran away, well, bounced away, hopping over hedges whenever the FBI appeared on the horizon seeking out the terrorist who sought to endanger American lives by using a pogo stick as a weapon of mass destruction. Must have been my beard that prompted them to put me under surveillance in the first place.

It was a somewhat dramatic end to what had been a delightful afternoon, in which games of hide and seek were played. Clare Johnson, of 19 Greenway Street, Hereford HR2 7TF, England Tel.01432 678534, who I shall refer to as “Ms. X” so as to protect her identity, proved to be really good at it. Took us hours to find her when she hid under the wheelbarrow, and it wasn’t until sniffer dogs were called in that her cardboad box hiding place was identified.

All in all, quite a weekend. I’m glad Jo and Catherine decided to have their birthdays at a time when I was in the UK.

Happy birthday to you both.