Woke up at 6.15am ready to go gardening. fell asleep again five minutes later and woke up two hours later, alarm clock down the side of the bed.

I went for my morning jog. I did my stretchy-exercises: I want to be able to get my leg behind my neck, so that *Twinkle* and I can do synchronised leg-behind-neck-whilst-brushing-teeth routines. (?) There is currently 23cm between the tips of my fingers and the ground when I try to touch my toes with knees locked. Watch this space.

Speaking of *Twinkle*, a Google search revealed today that she is famous, with her photograph and story on two websites, and her name mentioned on a further two. What’s more, these are no ordainary websites, oh no. I can’t be too specific, but the two with her photo on are UK Government websites in the UK and the USA, whilst the mentions of her name are on a Canadian govenment website, and the homepage of NASA! I kid you not!

(Incidentally, the appearances on those government sites are NOT in the “WANTED” sections, although if they were, they would read, “WANTED, for being Too Damn Sexy“)

Anyway, where was I? Ah yes, stretching. Following that, I shredded 5 ash trees (far too many of them at the WGP, bad for the ecosystem), including one great big Whopper. These chippings are now lining the paths between the vegee beds. Split some logs with my mighty axe, stacked said logs, came in for lunch. Did some kanji, read my book on investing, and then had my afternoon nap. Afternoon naps are so under-rated here in the UK, but do you the world of good.

I was woken up by 2 tonnes of pea gravel, and a grumpy delivery driver. That’s one of my next jobs now the two sets of steps are complete – levelling the land and spreading the peas. Mushy mushy mushy.

I then did something else, what was it? Oh yes, I played a great game which teaches you how to get out of the rat race, and basic financial literacy. Great stuff. I lost miserably the first time, won within 30 minutes the second. Hurrah for me! Then listened to the final episode of Start The Week, love that program, shame the series has now come to an end. Also listened to a very inspirational story about a German couple whose turned their lives around following the deaths of two of their children. Incredible stuff. Really makes you realise that life really is too precious to waste on bullshit (like working in an office etc).

I then went for my evening jog, and even broke into a sweat!! I’m starting off gently – training you see. It’s connected with dear John John: the first time I went to japan, one of the first things we did was go out for a jog in his local park. I can still remember it, around the pond again and again – he just kept going (despite being over 30 years my senior) when I collapsed on a bench. It is my intention to give JJ’s spirit company should he decide to revisit his earthly haunts, by jogging along his favourite route around the local park (thanks to TKob for inspiration). 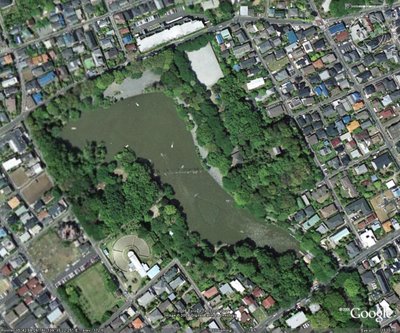 This evening I have been trying to unsucessfully convince one of my old classmates who dropped out last year to start the course again. He has a plan though which is mightily good, so he should be in Japan next year too.

And now, having mumbled, it is time for a shower, video chat with *Twinkle*, kanji and bed, so I can be up bright and early at either 6.15am or 8.15am depending on how tired I am!