Today, The Daily Mumble finds me riding a Virgin.
The view is spectacular.

I’m on the line between Newton Abbot and Exeter, a journey which provides stunning scenery if one looks out to one’s right, out onto the Atlantic ocean. At least I think it’s the Atlantic – the one that blobs up and down off the south coast of England whilst looking blue. To my left, the estate surrounding Powderham Castle. A herd of deer, a bunch of moo moos, a flock of silage bales twinkling black and white in the bright sunshine, blackberry pickers lining the hedgerows, eating more than they put in their recycled ice-cream containers, a scrap metal yard with stacks of semi-crushed cars balanced precariously up to the sky. Cotton wool clouds and Lance Bros. Logistics.

I’ve just spent the weekend with my brother and his lady, enjoying a real holiday which for me involves watching TV, eating bacon, drinking San Miguel and taking photos of the Devonshire outback. It’s so nice sometimes to be a complete lazy git and do nothing. Startrek, Startrek The Next Generation, The Flintstones, all had me enthralled, glued to the box. A real treat was provided by Friday’s showing of Trainspotting, which I’ve not seen for at least 8 years. A genuinely great film in my opinion, and one that rounded off a really nice day, the majority of the latter half of which was spent on the beach at Weather Permitting, the greatest festival to hit the south coast in the last 7 days. 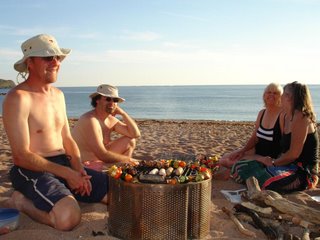 A few of the revellers around the washing machine

The turnout was good, both in terms of numbers and in terms of quality. A fire-filled washing machine drum provided the heat for the BBQ, whilst the sea provided wetness for paddling. One of our number had her foot nibbled by a seal, something that would have induced jaws-like panic in me, but which she took in her stride. Mind you, I do have a great fear of the sea, possibly stemming from the time when I was swept out by the rip current and had to be rescued by lifeguards, combined with last summer’s Japanese Jellyfish incident in which I found myself surrounded by the things. Thus, when the Aerobie thrown by my brother sailed over my head and into the sea, I hesitated – dare I enter the water to retrieve the costly article before it sank? That beach had a habit of suddenly dropping away, and I didn’t have my swimming gear on. And it was bloody freezing! 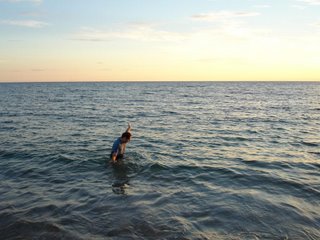 As you can see, I did eventually brave the depths of the Atlantic, wading in as the red rubber ring sank to the shifting sands below. After a brief struggle I managed to fetch it from its watery resting place, and thankfully lived to tell the tale.

Stephen returns from washing the washing machine in the sea

This weekend I also received some somewhat disconcerting news – my accommodation in Japan has fallen through, four weeks before arrival. It’s not so much the practical implications of this that I find upsetting – I’m sure I’ll be able to sort something out for when I get there – it’s more the emotional significance. It had been John John’s wish that his apartment in Tokyo, where he had been based for many many years, be ‘kept in the family’ in the event that he was not able to return there. We had been planning my stay there since last year, as he’d been planning to take a ‘year out of Japan’ in any case, long before his health began to fail. Thus, when he began his further travels on the non-Earthly plain, it was decided that it would be appropriate for us to proceed as planned.

Unfortunately, the situation has now changed, and it will now not be viable for us to ‘keep it in the family’ as John John had wished. Whilst this is no-one’s fault, I do feel somewhat guilty, guilty for letting JJ down, being unable to keep my promise. Still, these things happen,. It just requires a bit of a shift of thinking on my part. The thing is, my heart had already began to move to its new home in Kichijoji – an example of that can be seen in the map of the local park that I published a few days back.

Despite all this, I now feel quite positive about the situation. I am a firm believer that there is a reason for everything, no matter how unfair it may seem at first. I am sure that what had happened will ultimately result in a situation which works for the benefit of all. Indeed, the first signs of this are already producing buds, as I consider this new set of circumstances, and think of possible solutions, solutions which fundamentally shift how my year in Japan may pan out.

Anyhow, my Virgin is just about to pull into Bristol Temple Meads where I need to change, so I must depart.