Imagine yourself walking along a quiet track deep in the heart of the English countryside, miles from the nearst human dwelling, and a world away from any roads or rails.

You see a corner in the green lane up ahead of you… and turning, find yourself plucked from the peaceful landscape, and hurled into the middle of a high-speed super-highway along which thunder a thousand juggernauts, each emblazoned with advertisments promising untold riches; the ground on which you stand is now saturated with mini bars of organic chocolate and bright lollipops, whilst naked ladies lick every inch of your sweaty body.

That’s what happened to me today. Yes, I started uni.

What a lovely bunch of folks they are. “Special International students”, of which I am one, number 30. I’ve got to know about 6 of them, and all are great. No weirdos so far then. There’s only two Brits, myself and my clasmate from Sheffield (who I was very happy to see this morning); we seem to be mostly European, a couple of Singaporeans, 3 Chinese, oh, and the American contingent who seem to have studied their national stereotype quite hard before coming to Japan :-p

The departmental staff are fantastic. I don’t quite want their babies, but it wouldn’t take much. The two teachers I’ve met are Uber Cool, had a very nice chat with them in my speaking test, felt very at ease. The written placement test was pretty damn hard, with a lot of grammar in that I swear wasn’t Japanese, just made up to trick us. Possibly the hardest exam I’ve yet taken. Still, it’s only a placement test, and overall I was pretty happy. I don’t mind that much if I go into one of the lower-level classes.

The highlight was definately spending a couple of hours with about 20 Japanese students who are the core members of the equivilent of Sheffield’s Japan Society. Wow, what a difference they made. I must say though, it felt very odd to be on the receiving end in that kind of situation. So yes, we had a tour, then all had lunch together. Got to know quite a few of them, exchanged numerous phone numbers (thank goodness mobiles can store photos too!). The majority were like instant mates; only one or two spoke to you in polite Japanese – that really gets my goat! It seems I’ll be spending a lot of time with these folks, hanging out on campus, going drinking together, or out of the city on trips. All good stuff. Oh, myself and my fellow Sheffield-ite had a head start on the others – the guy who came here from Sheffield last year is an aboslute legend! He seems to have attained divine status, courtesy of his thirst for fun and alcohol! The path he beat certainly helped us today. As did the fact that two good japanese friends of mine (who studied at Sheffield last year) are core members of this international circle.

So yeah, my japanese uni experience looks like it is going to be just as positive as my British one. Tomorrow is paperwork day. but thankfully i don’t have to go as I already have a bank account etc dating back to the early years.

Speaking of which, I finally managed to get my money off Mrs Ogawa at the Koenji branch of my bank. It was quite a struggle though – I think they thought I was a terrorist. Must remember to take my belt of dynamite off next time. Yes, that really was a palaver. I was soooo happy though when my balance finally changed from 575 yen (£2.50 ish) to over 200,000 yen! I bet no-one has ever made it from Ogikubo to the Shinjuku branch of Yodobashi Camera in less than 3 mintes before! So yes, I now have a lovely new camera and 2GB stick. 7.2 mega pixels, ultra lite, ultra compact, superb quality video (that shown below is compressed by uTube!), very discreet for taken photos when one shouldn’t. Such as when one is in a massage-chair sales room surrounded by tired japanese businessmen and women on their lunchbreak!

Myself, my classmates and japanese friends have been causing a few riots around town of late. Last night we all headed on down to Shinjuku to play BiliBowl – a crossed between Billiards and Bowling! 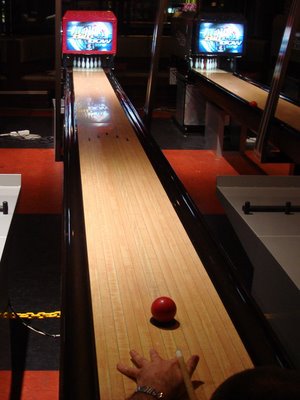 After a few beers, I found myself doing really quite well, with four strikes in a row. At the end of the game I looked up at the scoreboard and noted that I’d reached 279, which I thought sounded pretty good. I casually mentioned this to a Japanese friend who, on hearing it, got very excited;

Wow! You’ve won a year’s worth of beer!!

Having been unaware of this promotion, I was pleasantly surprised. All I had to do to claim my prize was to show the staff my score, as printed out by the machine that was buried under my coat, and had therefore become jammed and stopped printing! 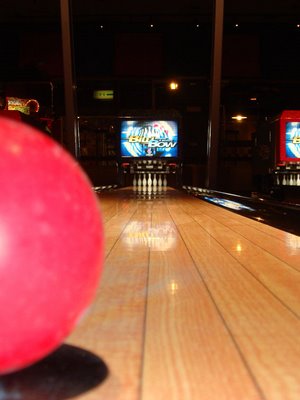 Matters were now taken out of my hands, as the manager was summoned to reset the mainframe and hack into the score log: my incredible performance had only been matched twice in the history of the game. I looked on somewhat bemused at the commotion I had caused, but the staff seeemed so excited that I didn’t dare spoil their fun.

I knew I should have taken my glasses. Thing was, I’d actually mis-read the scoreboard, and instead of 279, I’d actually only got 179… !! I apologised profusely, and ordered another gin and tonic, which I swear was made with white spirit.

Soon after that, we decided to take a trip up the Tochou – Tokyo Metropolitan Government Building. What we’d forgotten was that it was nightime, so all we could see from the 45th floor was flashing red lights on other skyscrapers. Still, they were very pretty flashing red lights.

Time for food, and time for the 12 of us to take over a little basement ramen-ya, with our raucous laughter and tales of the unexpected. Ahh, that was nice. It was what friendship is all about.

I’m starting to feel at home now. Ok, so the home within my home, that being my cell, has a leaking roof which means that when it rains hard (as it did this morning) water pours in through the ceiling, but at least I am surrounded by friends.

A busy social weekend is lined up ahead, and there’s the *minor* issue of study.

caw blimey gov I think I’d better get some sleep!