So, yesterday was indeed my First Proper Day at Uni.

I only had one class, Japanese language, and that was a pretty positive experience. There’s nine of us in the class, all but one of whom I’d already met. Sensei is lovely, very clear Japanese, very kind, GSOH, and pretty cute too, which helps of course. I’ve already studied the stuff we covered, which was a relief, as I was finding it difficult enough just getting to grips with the way the class was taught – let alone having to worry about actually learnig something!

As the class ended we were met by IFL (the Internatioal Friendly Lunchi brigade), who invited us to join them for what turned out to be, funnily enough, a Friendly Lunchi.

They really are nice people… I ended up spending the entire afternoon with them, chatting about this, that and the other, being taught rather questionable Japanese and so on. Quite a few of the members are Korean / Chinese students who have been here a few years – I was pretty surprised when they told me their names, as their Japanese was (to my gaijin ears) so natural.

I was invited by one of my new friends to attend the first session of a course she’s taking in Civil Law. Now that was an experience! 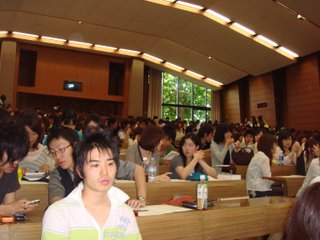 Like all sessions at Rikkyo, the lecture lasted 90 minutes. I think during that 90 minutes I managed to decipher the first 3 lines of the module outline. As for what was actually said, well, let’s say my knowledge of Japanese Civil Law is not that far advanced on what it was 24 hours ago. Ok, so I understood that he was using car salesmen and loan companies as an example of whatever message he was trying to get across; there were also frequent mentions of refrigerators, and according to my dictionary, a parasite that infects Siberian Swan eggs. I think I may have mis-heard…

I tell you what though, I would be utterly lost without that electronic dictionary. I’ve always thought of them as being for lazy people, people who can’t be arsed to look up whatever it is in a proper dictionary. After that lecture, I appreciate just how indispensable they are. There is no way I could possibly have looked things up fast enough in a regular dictionary – and it would have had to have been a huge dictionary to match the power of my eight milimetres of pure electronic sex-with-buttons-on. It also has a history – recording every single word / phrase / kanji I look up, so when I get home I can simply sit down with the dictionary and write up the day’s new finds.

Anyway, back to that lecture: 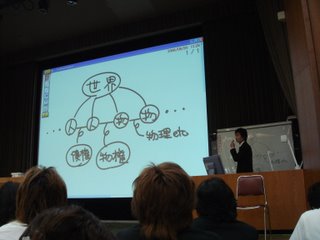 Is this not fantastic or what? Here we have a huge cinema-screen, and beside it, what appears to be a standard whiteboard. When the professor writes on the white-board in pen, whatever he writes appears instantaneously on the huge screen – is that not something to lose sleep over? Ah, such a long way from Sheffield, where the teachers are still forced to explain new grammar points by etching their example sentences into slabs of granite using iron-age etchy-things.

Mind you, yesterday’s professor could do with a litle kanji practice. I’ve never seen such badly-drawn characters before. Makes looking them up devilishly tricky.

After uni, the International Freindly Lunchi brigade met up to go for an International Friendly Supper at a fantasticly cheap okonomiyaki restaurant. Wow, the food just never stopped coming. Haven’t had okonomiyaki for a long time, absolutely delicious.

Naturally, the real highlight was being given the opportunity to get to know people a bit better. Hmmm, a very positive experience.

It was then suggested that we all go for a drink in “Kappuru-Koen” (literally “Couple park”, a nickname given to this little green oasis in the centre of Ikebukuro due to the number of couples who go there to whisper sweet nothings in one-anothers ears). When asked if people in the UK gathered in parks to drink, I replied that yes, they did, but usually only between the age of 12 and 16. It’s a very different affair in Japan however, with people bringing instruments, poi and the suchlike along, gathering in small groups to relax and enjoy the feeling of community. No smashing of beer bottles on the tarmac, no raucous screeching, and thankfully no “Yeah well Stacey said she slept with Darren last week but Stacey’s a lier and I hate her”.

By this time it must have been about 11pm. It had been a long day. *Twinkle* was just finishing a meeting elsewhere in Tokyo, and so we met on platform 10 at Shinjuku station. Having consumed two whole cans of beer in the park I was mightily talkative, and utterly inconsiderate of the Japanese dislike of PDAs (Public Displays of Affection).

I’m so glad I have *Twinkle* here at the end of the day. My rock of relative stability, in a world where I am otherwise very much at sea, in semi-charted waters.