Once again the mumble comes to you live from a red-cushioned seat that is bolted to the floor of a train that happens to be making its way through the Japanese outback.

Day three of the holiday was as memorable, if not more so, than day two. I woke at 7am from a very good night’s sleep, and decided to slowly bring myself into the waking world by having a soak in the medicinal onsen waters. Getting out of bed was pretty difficult, it was SO COLD! Still, I managed to clip-clop across the deserted street without shattering into a million fragments, and it wasn’t long before I was positioned by the steaming hot inlet valve in the bath of murky green water.

Breakfast was delicious, and included Harry the Fish, whom I ate all of, except for his head which I pulled off first, rice, the customary raw egg (got used to eating them last summer, don’t know what the Brits have got against them. Bit of food poisoning never hurt anyone), and an assortment of other bits and bobs. After that it was off to feed the fishies in the river behind the onsen. The must fun thing to do was to throw in overly-large white bread-crusts in – these were easily distinguishable against the river bed, and thus made spotting the fishies that were being chased by their hungry friends that bit easier. It was incredible how fast they moved – and they hardly ever came up for air!

The other side of the bridge on which we’d been playing pooh-fishies stood a wee temple, with some beautiful grounds. These contained some stunning maple trees, drenched in bright red paint that would even take people who are colour-blind by surprise. 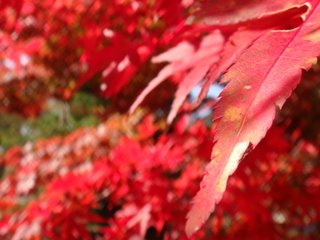 I couldn’t get enough of them, just beautiful, really made me smile …but was eventually pulled away by the sound of Twinkle’s cry for help. She was stuck in some ancient iron geta, and needed a helping hand. 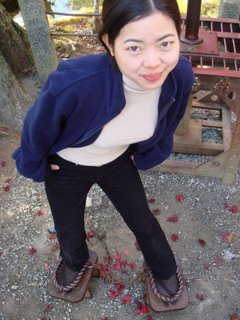 There’s a zig-zag path that leads from behind the temple up the walls of the valley in which the village lies, to a cave complex (entry 400yen / £2). I think the owner has been to Disneyland one time to many, judging by the safety of the place. I’m used to those Welsh caves where one has to wriggle through tiny little passages that are about 10cm in diameter, and require you to remove your bottom before entry. Wetsuits also come in handy. This morning’s expedition into the deep wasn’t quite so challenging however. Thick nets, the sort that would be more at home on a fisherman’s boat, formed walls that lined the entire course of the route through the hole in the ground. Behind the nets stood/hung row upon row of staligtites / stalimites that no doubt at one point had been very impressive – unlike now – they’ve all had their tips snapped off. Perhaps that’s why he had to resort to nets… still, at least there’s no plastic gnomes in there, or plastic dinosaurs for that matter, like the 40cm Tyranosaurus Rex that is positioned right outside the window of the men’s urinals at the Ryokan, along with a cheap china duck and a sheep made out of pipe-cleaners and cotton wool. Perhaps it’s one of those Japanese traditions that we didn’t study at uni.

Anyhow, the caving adventure came to a abrupt end when a party of 20 or so Americans arrived: enough to make anyone afraid of confined spaces. 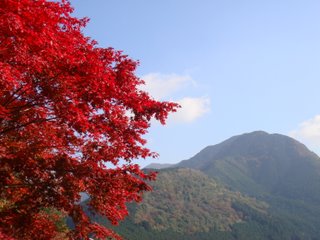 We then followed a path through the woods along the side of the valley. It was just beautiful. Unfortunately, much of modern day Japan is covered in farmed sugi (cedar? The evergreen that grows straight, tall and fast), the original mix of deciduous trees having been felled in centuries gone by. This makes for very dull scenery, and of course doesn’t do much for biodiversity. However, there are pockets of ancient woodland, often under the ownership of temples and shrines, as was the area that we walked through this morning. The path was deserted – quite something for a national holiday when typically the usually quiet countryside buzzes with the sounds of city folk busy relaxing. We also crossed a rather funky swinging bridge. Here I indulge in one of my fantasies… 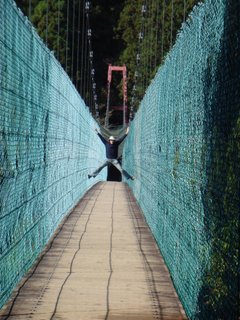 Back to the ryokan to pay the bill (40% discount and no charge for the beer thanks to Twinkle’s smile), then off down the road to what is possibly the most beautiful gorge I have ever encountered in Japan. 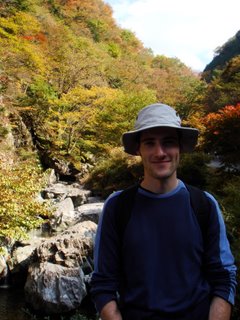 Fortunately we encountered it from the top, unlike most people who were struggling to cope with the demanding hike up the rocky path. At the bottom we caught the free bus provided by the local council as a part of the 3-day Momiji Matsuri (Maple Leaf Festival), this took us to the main festival ground where we ate, drank, and prepared for our next Grand Adventure.

I’ve had a thing for helicopters since I was a child. I think I must have been about ten the first (and only) time I went in one. It was a huge monster, seating about 20 people, and thus quite un-helicopter like. Too stable for my liking. I did enjoy the flight though as we swooped quite low over a nudist beach.

Anyhow, since then I’ve only been able to have wet dreams over radio-controlled models. The chance to fly in a real one just hasn’t come about; they are notoriously expensive to run.

“Maple Tree viewing from above – only 3000 yen (£15)! Well, how could I resist? Twinkle had never been in one before, so it didn’t take us long to say “Two tickets Please”. We were then taken by minibus from the festival site to the helipad, which was situated in a disused quarry a little way up the hill. There, we sat in the sun on little fold-up chairs awaiting our turn, clinging onto our hats every time the helicopter returned to the pad. 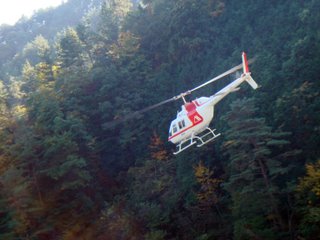 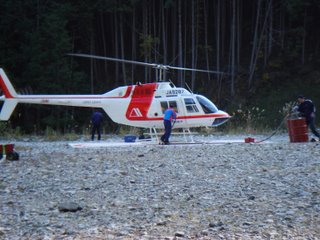 note here, whilst the helicopter is being refulled, the pilot is taking a piss behind it.

Finally, we were called forward. I was itching for the chap to ask us who wanted to sit in the front (as he had asked all previous groups of 4 passengers), but no, not a word. In the end, I could contain myself no longer, and burst out with my request. “Yes, of course, no problem” he replied. Tee hee!!

Approaching the helicopter I was told to keep my head down – couldn’t possibly think why. Up I climbed into the cockpit, next to the uniformed pilot holding his knob. I greeted him, and then had a look at the great array of dials in front of us. 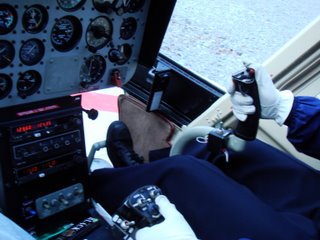 Amazing how deceptive an exterior paint job can be – this thing seemed like an antique from where I was sitting. Still, it was too late to worry about that now. I just had to be careful not to put my foot through the window below… 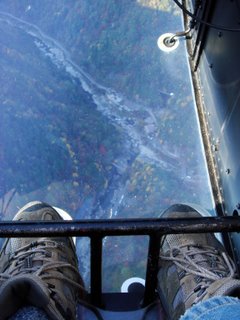 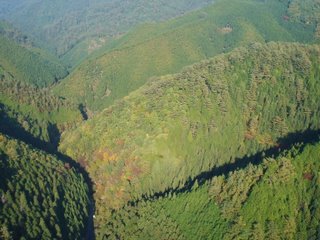 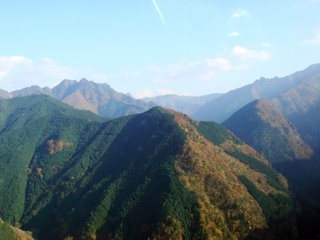 It really took my breath away. The combination of actually flying, and the beauty of the landscape below, incredible. I love seeing forested hills, so to see them from an entirely new angle was a real treat – especially having actually experienced them from the ground beforehand and thus knowing how big they really were. 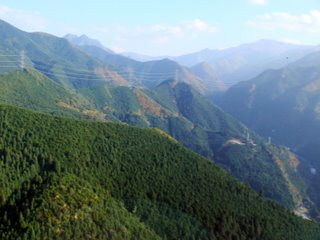 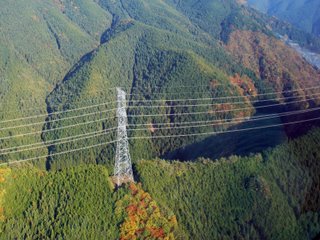 I also spotted the river beside which we’d walked, which now looked like a wee trickle in the great landscape. It was well groovy, and further enforced my desire to own a helicopter. When they create a green one that is. But who’da thought it eh, having a flight in a helicopter this holiday? 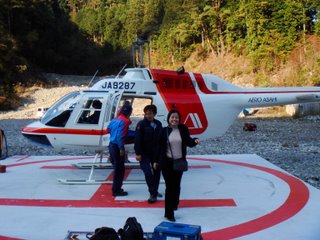 Our journey back to Twinkle’s mum’s was quite fun. Having had a free ride up the mountain, we weren’t too keen to return to the ranks of the fare-paying passengers.
However, we thought we’d check the timetable anyway, and so made our way up the road to the stop. At the bus stop we were greeted by two uniformed men directing traffic for the Momiji Matsuri. They kindly read the timetable for us (glad to have a break from baton waving), and suggested we sit down on the bench whilst we waited. We then explained that actually the bus was just a back-up, and that we really intended to hitch. On hearing this, they became very enthusiastic,

“Oh, let us stop a car for you!” When we protested they did relent, but as soon as a car did pull over they rushed to the driver’s door,

“Would you give these people a lift please?” Thus it was we covered the first few kilometres of our journey for free.

The next stage saw us faced with a bit of a problem: we wanted to hitch from the bus stop (thus giving drivers a place to pull in), but there were two men from the bus company and a rather odd granny standing there. As soon as we approached the stand she barked, “Have you got tickets? You need tickets! No tickets, I sell the tickets round here. You’d better buy a ticket. Twinkle went rather quiet and looked the other way, wondering what on Earth to say to this rather pushy obaasan. I realised that it was no-use beating around the bush and so told her bluntly that we wanted to hitch, and if that didn’t work we’d take the bus.

I’ve never been rude to a granny before, and I didn’t really want to start, but felt that it really was important that we didn’t give in to this bullying.

“No, thank you, but we’re going to hitch.” And with that, we continued 50 metres up the road, where we were picked up by the 5th car that came our way. I looked back down towards the bus stop when we were getting into our private chariot, but unfortunately granny was not looking our way. If I’d had the time, I would have run back, put my thumb on my nose, waggled my fingers and said “nah nah nah nahhhh naaaaahhhh”.

And that’s how we reached the station, where we caught the train that you now find me on.

Well, it just so happens that the end of today’s story coincides with the end of the line. So, until tomorrow, do take care, and remember that life is all around you; all you have to do is say YES, unless the listener is a granny trying to sell you a ticket for a bus.