Recently I’ve started to watch Japanese films. DVDs are dirt cheap to rent over here, we’re talking £1.50 for three days for the latest releases – I’m slowly making my way through the top ten.

Today’s choice was “Haru no Yuki” (Spring Snow). I saw a trailer for it when watching yesterday’s selection, ‘Always’, a film set in 1950s Tokyo, when the tower was being built (making it the tallest in the world at the time), and families were taking delivery of their first TVs, fridges and washing machines. A very exciting time as the Japanese began their journey down the road to recovery, following the long-awaited withdrawal of the US occupation forces. 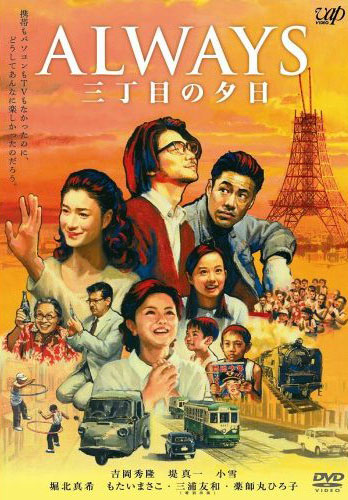 Anyhow, I handed over Haru no Yuki for it to be checked out, and was asked – at least I thought I was asked – if I was sure that I wanted it, there were no English subtitles. I also heard a brief mention of a bonus disk somewhere in that sentence, but decided I didn’t want to watch that. I then simply told the clerk, “No, it’s ok, I’ll Ganbaru” (persevere), referring to the lack of subtitles.

It seems I should have listened more carefully. What I am now watching is a rather dull one-hour ‘Making Of’ feature – there is no main film. It’s the kind of ‘Making of’ feature that actually doesn’t tell you anything about the making of. There’s a couple of short interviews with the actors who basically say “Oh it’s such an amazing film!”, and the remaining 55 minutes is made up of pictures of the producer’s arse which has a big “kiss me” sign pinned to it. Well, almost.

So, I now look back on that conversation in the video shop and feel rather stupid. I realise that he didn’t actually mention subtitles at all. That was me thinking in-context and thus jumping to conclusions.

Him: “Are you sure you want this video sir? It’s not the main film, it’s the bonus disk”

No wonder he went quiet after that rather odd response.

Of course the thing is, I can’t go back and get the main film now as that guy will still be on duty, and despite the fact that he’d pretend he’d never seen me before and give me the politest smile ever, secretly he’d be thinking, “Hah! It’s that’s stupid foreigner, the one who reckons he speaks Japanese. I bet he’s come back for the main film…”

Well, I suppose the director is wearing a rather funky hat.