I’m finding life incredibly interesting at the moment. It’s been pretty fun anyhow, of it’s own accord (see the helicopter story below), but what’s even more exciting is all this potential I’m feeling. It’s so exciting, thinking about all these things I CAN do. Like read books. Learn stuff. Feel good. Make edible meals… It’s tremendously exciting to realise that one can actually make huge changes in one’s life for the better.

Of course it’s also highly ironic that there are days like today, when I am relatively unproductive. I’ve spent the whole day indoors, much of it at my Mac, trying to sort out some technical hitches with Tame Goes Wild. I used to spend hours playing with this website; these days it doesn’t need much attention, except for raw data input such as this. Despite its restrictions, Blogger really has been a blessing, doing all the complicated things behind the scenes for me. You may have noticed a few ads on the page – I’m conducting an experiment for the next couple of months to see if Google AdWords really do pay. This was prompted by my receiving an offer of what I consider to be a decent lump of cash to place a few ads on my Live and Work Abroad page. I didn’t say no, and to my surprise the money was in my Paypal account within 5 minute of me having uploaded the links. It’s just a shame I’m not allowed to click on the ads you see here on The Daily Mumble myself, as a few of them have been quite intruiging.

My apologies for having sold out. These past few months I’ve started to feel that until I have my yurt (as pictured here in the Wye Valley, not far from my parents home, somewhat coincidentally) in the middle of nowhere and have a vegee plot that’s big enough so I can live offa the fatta the land, capitalism is the only way to go. It’s not that I don’t have a choice, it’s just that life is easier if one works with the system, within the framework that has been constructed by market forces, rather than struggling to resist the dominant pattern of thinking. 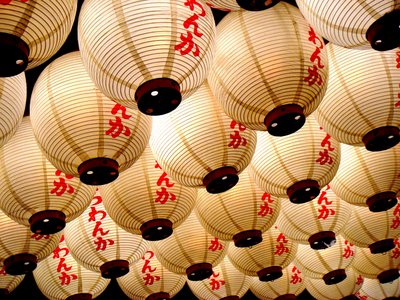 It’s not necessarily all bad. These days we’re starting to see more cases in which the green movement is utilising capitalism to bring about changes for the better: think the roaring Carbon Emissions Certificates industry, or Richard Branson’s huge investment in a new super-clean fuel.

I now appreciate that there is room for manouvere within the current framework. Outright rejection of commercialism, selfish hedonism and capitalism in general is possible – just not in central Tokyo! For example, there is a WWOOF host north of Kyoto where the family (consisting of a father and 4 girls, none of whom attend school but instead run the home) are entirely self-sufficient. They’ve taken it to extremes: the cooker is powered by the gas that is emitted from the poo that their pigs provide!

I had another thought as well. If I were to actually make money from my website, it might encourage me to write more, devote some time to developing it and dragging the quality out of the bottom of the cattlegrid where it lies rotting along with the hedgehog corpses.

The power of positive thinking is quite stunning. We’ve all heard it a thousand times I know, but how many of us have ever really grasped a hold of the opportunity that every day brings to turn our fortunes around when things are not as we would like them to be? I know that I have a long history of practicing hypocrisy, but this time I really am determined to practice what I preach. I think I am fortunate in that I have been given a bloody hard kick up the arse – by my university. This, combined with what I choose to view as limited window of opportunity (that being from now until next September when I return to the UK), has provided me with immense motivation. I am determined to not return to the UK, and regret having not tackled my problems here in Japan at an early stage.

I had a really great night last night. Jon the Giant (as he is known by the japanese) invited myself and Sir Nigel, another Sheffieldian, to an okonomiyaki party at a sort of gaijin house about 15 minutes from where I live (15 minutes by bus that is. 30 minutes if one runs quite fast at 2am when very drunk, and stops for a wee on the pavement, only to find oneself faced with a policeman on a bicycle…). It was great to catch up with Jon and Nigel. And drink. And drink a bit more. And a bit more. I recall telling Jon’s landlord that I had yet to sleep with a man. Quite where that came from I don’t know. The room went very quiet.

I also recall nigel and Jon nuzzling one another 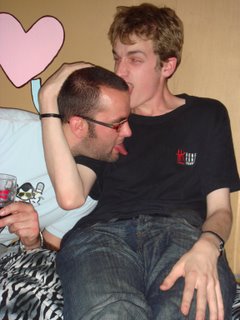 and my bum getting a thrashing with a belt.

It’s on nights like last night that all classroom troubles simply dissapear – I CAN speak Japanese! Had some really nice conversations, very inspiring actually. Caw blimey, I do love to talk. There was no shutting me up.

Anyhows boys and girls, I’ll leave it there for now. Beddybyes time me thinks.