Well what a lovely Christmas. Just purrfect. I shall refrain from providing a detailed account, as alas, essays are a’bangin on the door, demanding attention.

09:32 – Twinkle & Co. touch down at Narita Airport, make their way to family home just north of Tokyo. Simultaneously. I depart from my home for the same destination.

11:00 ~ 23:30 Much fun is had at the family home, including the eating of Ducky Original Mince Pies, which must surely be the most heavenly in the whole world. Not only is there Christmas to celebrate (many of the family are otherwise engaged on Christmas Day, what with it being a normal working day in Japan), but also Twinkle’s birthday. There are ten of us around the heated table. Amongst the many gifts I receive are numerous articles of clothing which I love. In less than three months Twinkle’s eldest sister seems to have got me completely figured out – as revealed by this stunning gift with which I was delighted. 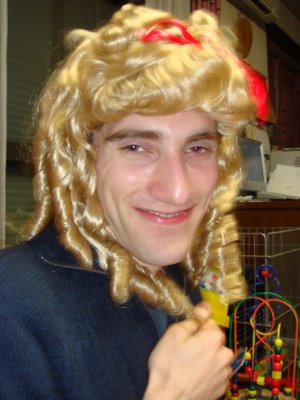 I present Twinkle with her Strawberry birthday cake. It contains 3 large punets of strawberries, 3 eggs, half a cup of flour, 2 bars of chocolate and half a cup of sugar. It is cooked in a saucepan, using our very clever hotplate with a button on that says “Cake”. It is a moderate success, a wee bit soggy. The four banana cakes I made that week were much more successful. Lesson: stick with bananas.

08:03 Twinkle and I board a train bound for Izu-Shimoda, 4 hours south of Tokyo, to join Emmie and Russ and others for a traditional Christmas in their countryside retreat.

Thanks to the Foreign Buyers Club (virtually free delivery across the whole of Japan) we have everything required to make it feel just like home, including a HUGE turkey. I recall the first time Russ and I stuffed a Turkey, back in 2002. That was quite a struggle, but over the years Russ’s skills have clearly developed: he is now an absolute pro.

A few stitches signal the end of the operation.

In the end, the Turkey took over 6 hours to cook – I think it was about 9.30pm by the time we were ready for Christmas Dinner! That’s not to say we went hungry in the meantime, oh no! The amount of food consumed that day was quite staggering. Oh, and the drink too…

Emmie and Russ had one surprise up their sleeve with which I was absolutely delighted – a home cinema! DVD player linked to an overhead projector and hifi-system, with roll-down screen that had been cunningly (and unobtrusively) attached to the ceiling! This meant that we were able to watch some fabulous DVDs, including the BBC’s Planet Earth, a classic episode of Channel 4’s Phoenix Nights, Superman Returns (I nearly cried when he saved that plane load of people, I was so moved), A series of Unfortunate Events (great acting by those children), oh, and a FABULOUS Canadian circus troupe. I forget what they’re called, but they were just great. All so theatrical, more an opera on a trapeze than an elephant on a beach ball.

I was very happy. Good company. Good food. Good drink. And a very comfy cinema. What more could you ask for?

Brussel Sprouts of course, and that’s exactly what we had, specially shipped over from the UK, to really make what was the most delicious Christmas Dinner into the 100% genuine article. Christmas crackers were pulled, plates were stacked high, champagne corks were popped. 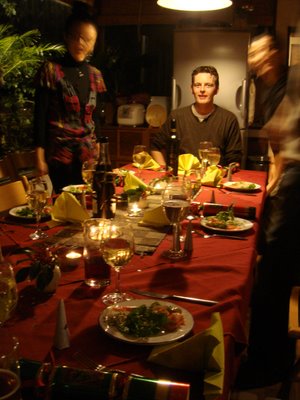 Getting up was followed by the Boxing Day Walk. Whenever I go down to Shimoda, Russ and Emmie always have some new local discoveries up their sleeves. This time was no exception, and I must admit I was pretty stunned by the HUGE open-roofed cave-type-affair which we found ourselves in. Fascinating rock formations, reminded me of my trip to Mars.

Just up the hill from that was a natural sand-piste, begging to be skied upon (there was actually a place just acros the road that rented out sledges!). I did give it a go using my natural skis on which to surf, but within seconds of my arrival at the top a huge section of the sand dune began to break away and slide down towards to sea – scary stuff! I ran away as fast as I could! 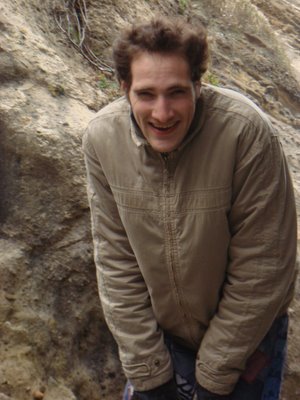 And before we knew it, it was time to come home. The holiday was only too brief. Essays and revision howl for attention, times passes only too quickly.

Twinkle and I would like to thank Emmie and Russ very muchly for your kindness, t’was wonderful! 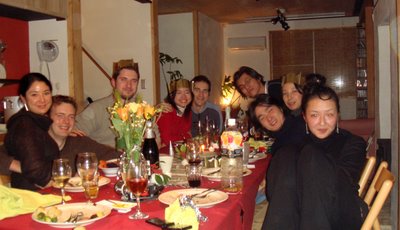 p.s. one email in my Christmas inbox was from Google Alerts, which I have set up to tell me whenever people talk about me on the www, or as tends to be the case, when they steal some photos from TGW. This email informed me that a photo of some snow drops in mum and dad’s garden has made it onto the Woodland Trust website, as a “wallpaper of the month”. How lovely!