Browsing through my old photo albums in search of a travel story for the next edition of the ‘magazine’ I mentioned in my last post, I came across the one titled “Jened, Summer 1997”.

Wow, looking at these really takes me back. 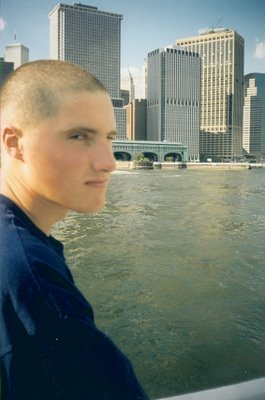 These were taken (surprisingly enough) on a ferry just off Manhatten island or whatever the place is called. Although I look really pissed off, I remember this time as marking one of those historic breakthroughs, one of those momentous transitions from childhood to adulthood. I was really happy. My nose was big even then. 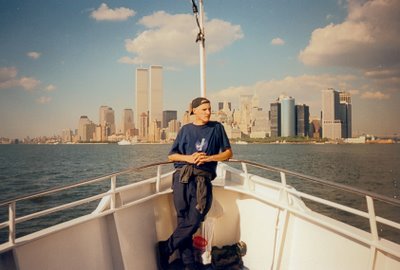 Wow, what a great pose. I think the clothes, and the fact that my friend William had ‘accidentally’ shaved all my hair off – he forgot to put the guard on the shaver – gave me a great sense of individuality. It was a complete break with the past. Here I was, in New York on my own terms, with a rebellious hair style (i.e. no hair), with new Wiggy Wiggy clothes and a baseball cap turned backwards. What’s more, I’d just lost my virginity. I was Someone. This was my life. That was an immensely liberating experience, and tremendously exciting.

And then I think back to the years following that time, and I recall how that sense of freedom gradually waned as the ‘reality’ of life weighed in. Relationship, mortgage, a ‘career’ stacking baked beans …but thankfully that taste of freedom I’d had at the age of 19 was not entirely swallowed up in the sea of Tomato sauce, although there were times when the illusion that there were no more than 57 varieties of life did gain a firm foothold, threatening to submerge that glimpse into a world of other possibilities, much as a piece of wholesome organic toast might find itself starved of breath when swamped under an entire can of beans on the breakfast platter. 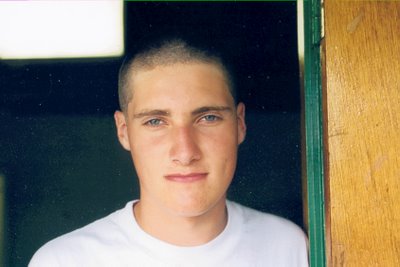 I’m now wondering if it is possible to recapture that immature sense of endless possibilities and unqualified self-assurance. A year ago I would have said no, you have as much chance of recapturing such teenage feelings as you do of returning to early childhood, where one is relatively unaware of ‘impossibilities’. Recently however, I’m not so sure. The only thing that has changed is my way of thinking. I’ve learnt that restrictions on my behaviour do exist – but such ‘restrictions’ are ultimately not set in concrete, they are but part of a belief system; can’t I simply learn and adopt another belief system in which I am that 19-year-old in New York ago? 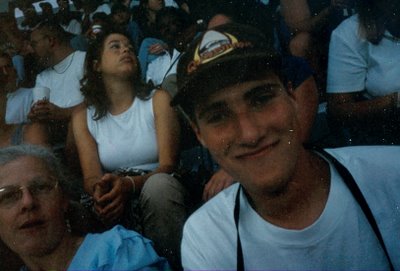 Yankees vs. Detroit Tigers. The reason I don’t like baseball today. It was the longest yawnathon I’ve ever been subjected to.

Well, Ok, maybe I don’t want all elements of that 19-year-old belief system – it wasn’t all good! For a start, I was a nightmare in a relationship as I was very selfish, having yet to learn the art of compromise. There were other things too which can’t be mentioned on this family site.

Anyway, I must get on with promoting the belief that I will pass tomorrow’s essay-writing exam. I guess a bit of revision might help with that one.