I really like *Twinkle’s* family. This holiday season has seen me spend quite a bit of time with them (including the past three days), and thus we have got to know one another a lot better. I feel relaxed when at the family home, and the family are relaxed around me. We’ve started to pull one another’s legs too, always a good sign. 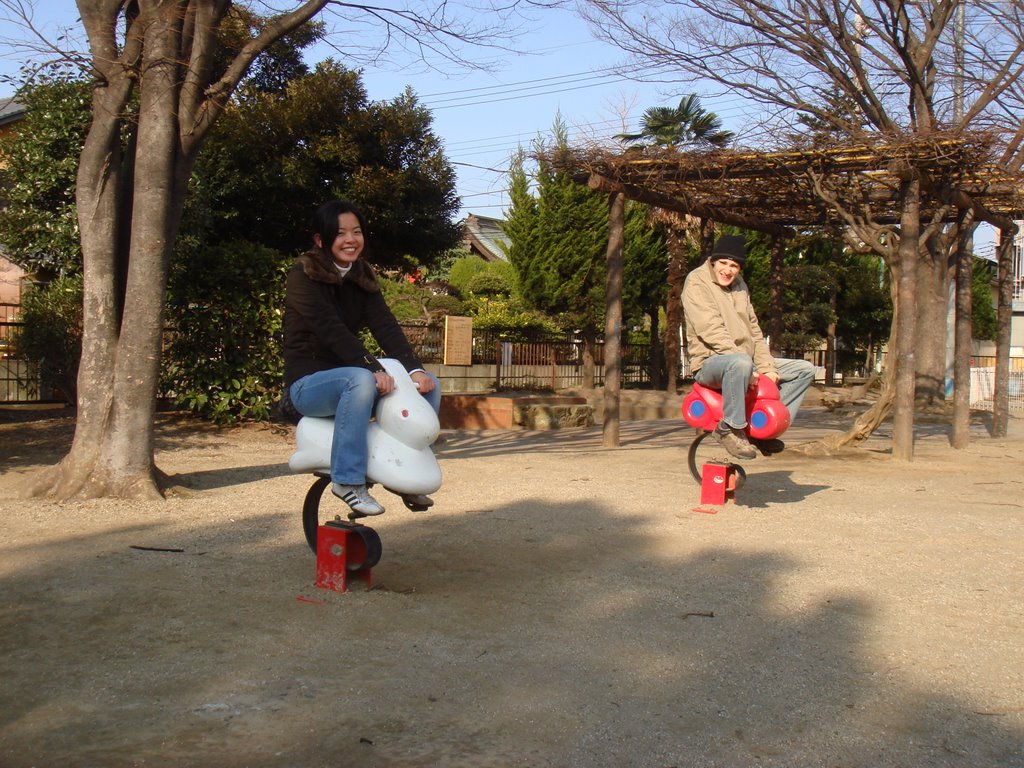 We really had a good time this New Year. In addition to myself, there were two other Brits present, what with two of *Twinkle’s* siblings having been raised in the UK, and thus having British partners. They are both really nice people, and I feel very grateful that I have been so warmly welcomed, but I also see in one of them myself a few years back when I found myself in social situations, unable to understand what was going on around me. It was immensely frustrating – I do feel for him. 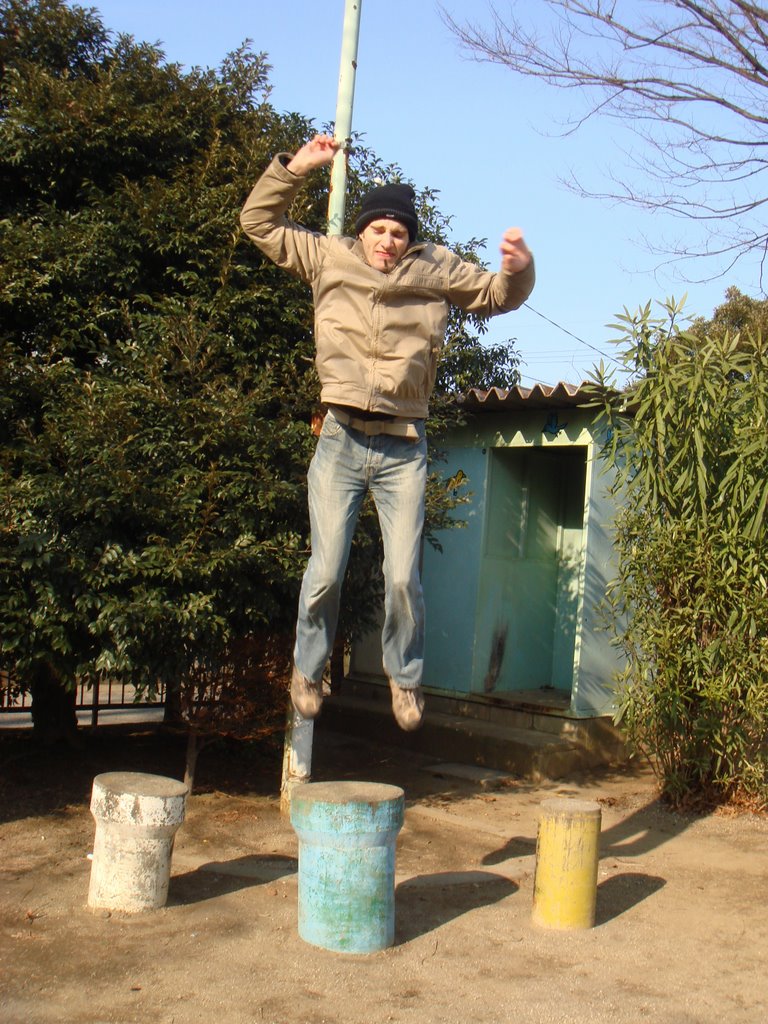 But my God what an amazing transformation this uni course has brought about in my Japanese! Crikey, if I can learn it, anyone can. What is it they say – we only use 10% of our brains? Imagine what potential there is in each and everyone of us! We are truly amazing. Well done us. Now if we could just turn that brain power towards making some positive changes in our world, that would be wonderful. I had the misfortune to get sidetracked by a Photos of the Year thing on Mainichi News – what an appalling condemnation of humankind. Virtually every shot from the past 12 months highlighted human suffering, caused not by natural disasters, but by other humans. It is sickening what we are capable of, how primitive we are. Even more shocking than those photos however was a short film on Google Video (with multiple copies on You Tube): the hanging of Saddam Hussein as captured on a video phone.

Naturally, the media do focus upon the dark side of life. They always have and always will. If only we had a media industry that focused on the positive things in life to counteract that which currently produces the majority of the world’s news.

As for the comments left by by viewers, and the viewing figures (that run into the millions) below videos of fat Americans miming along to Romanian folk songs, well, they point to the existence of millions of people employing less than 1% of their brain power. Imagine if we could harness the wasted talents of these people, imagine if these people, instead of spending hours leaving abusive messages on internet bulletin boards, put their energy into helping their community, or devising different ways to get itching powder into George Bush’s undies… I know, I know, it’s all very idealistic, but I so want to see more happiness in this world.

Why is it that suffering is a lot more attractive than pleasure, when witnessing others experiencing these things? I recall an email I received shortly after I met *Twinkle*, complaining that The Daily Mumble had become incredibly boring since I’d quit whinging about being single. Personally I’ll go for boring but happy thanks.

Thinking of this kind of mass-, oh, what’s it called, there’s a proper word for it, when you get loads of people involved in a project to get something done… well, anyway, when I think of what IS possible, IF ONLY people would get together and do it, I recall the case of the replacement of the UK’s entire network of railway lines in the space of just a couple of days (this was done in order to establish a standard gauge nationwide). One couldn’t possibly imagine Network Rail pulling off that kind of stunt these days.

This positive thinking malarky though really does show results. I was in a foul mood earlier, having inadvertently resized a whole load of photos without saving original copies. It lasted about an hour. I really felt like poo, and hadn’t the slightest inclination to do the many things I’d planned to do tonight. Instead, I decided to go to bed and sleep my mood off. Then, as I was brushing my teeth, I began to think, “wouldnt it be nice to go to bed feeling happy tonight? …how could I achieve that? I suppose if I did actually get all those little chores done that I’ve been meaning to do since I got back, well, that would make me feel somewhat satisfied. What else is making me feel shitty? Ah, yes, stress over that essay. Ok, let’s have a look at what I need to do for it…”

And so I decided that I would no longer feel shitty. I got everything done that I’d not really wanted to do but that needed doing, I went through my uni folder and figured out what I needed to read, and then made a plan for tomorrow. That’s important, the list of things to do.

The result of this simple decision to stop feeling like a snail that’s just had its new shell crushed by Britney Spears of all people is that I have got everything done. And, as a bonus, I feel great!

*Twinkle* and I entered a business competition today, run by an educational group connected with Sheffield University. It was a close call. We knew that the deadline was sometime this week, but had been unable to get firm details on what exactly was required, due to the holidays and all. Then, at 1pm (today) I received an email from a friend informing us that the deadline was 9am (today)!! Well, thank heavens for time-zones! With Japan being 9 hours ahead of the UK, we were granted 5 hours in which to write and submit our Business Proposal. I just got it done in time, emailing it to the appropriate office just 8 minutes before the deadline! There’s quite a lot at stake, what with a first prize of £10,000. We are very fortunate in that not only did our friend win a couple of years ago (and is thus able to advise us), but also, as a part of her MA last year *Twinkle* was required to write a complete business plan, which contained all the information I needed today.

We’ll find out on the 28th January as to whether or not we’ve been shortlisted. Fingers crossed eh?! I could do with a new camera (tee hee).

With regards to New Year by the way, I think I’ll tell you about it in the Year In Japan New Year Podcast Special, which will be coming out, appropriately enough, about 3 weeks into January. Until these exams are over, time is extra extra precious.

But yes, really did have a fantastic time. Traditional Japanese New Year food is just gorgeous, and there’s so much of it! I also got through about 7 cans of been on New Year’s Eve which meant that I was still drunk when I got up at 2pm on New Year’s Day! I was a little concerned that *Twinkle’s* parents would be a little disapproving, but it was all laughed off – the previous evening had been so funny. Japanese TV really is strange though – the most popular program (now in its 4th year) involves two hours of watching comedians trying not to laugh, and having their bums spanked very hard whenever they do. 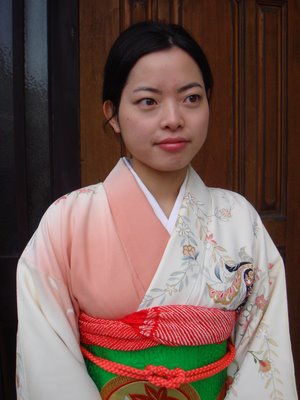 Continue to work on myself harder than I work on anything else. To stretch myself more than I have ever stretched myself before. To continue to appreciate just how lucky I am to be in the privileged position of living in a safe, secure, comfortable environment in which I can devote my time to pursuing goals that I set myself, as opposed to having to fight for my life on a daily basis.

On a more pragmatic basis: learn and remember the readings of 2042 kanji bu April 3rd 2007 (combined with a revision of the writings and meanings). It’s totally possible. I’ve seen people (on Japanese TV funnily enough) learn an entire language (Korean) to reach a near-native level in the space of 3 months. The main difference between him and me is not intelligence, it’s will power, and the way of thinking. 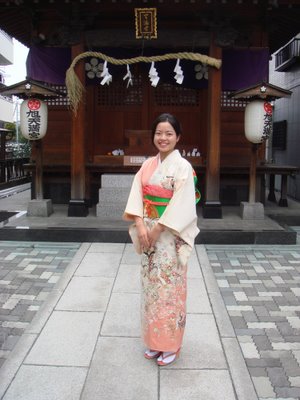 *Twinkle* at the shrine

There’s nothing I want to give up. Don’t smoke. Rarely drink.

Ah, I know, spend more time with different Japanese people, so as to not end up speaking just like *Twinkle*. I want to be totally comfortable with Japanese by the time I return to the UK in September 2007.

Really kick the procrastination habit. It’s coming, along with the positive thinking. Yes, that’s probably the single-most detrimental force in terms of my pursuit of success, success being the achievement of my personal goals, which are many and varied. One of them is to marry *Twinkle*, but that won’t be happening soon, as I haven’t saved up enough to pay Mickey Mouse to conduct the ceremony yet…

Happy New Year dear Mumblers. Let’s make 2007 our happiest and most fulfilling yet! 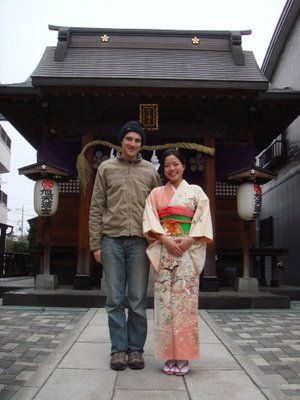