My God. The US are at it again.

“So many dead people were lying in the area. We do not know who is who, but the raid was a success,” interim Somali government spokesman Abdirahman Dinari told AFP news agency.

Well, that’s alright then. I don’t think it matters what they have done, no one has the right to take another’s life. It is truly horrendous that the US think they have the right to go and kill people wherever and whenever they want to. All in the name of the supposed war on terror.

Anyway, that’s not what I came here to talk about. I just discovered that fact, whilst attempting to find the online version of the story that that I read this morning on the front cover of London’s Independent newspaper.

The story basically demonstrated the true cost of travelling from Manchester to London, by plane and by train. The focus was not so much on the money, as on the amount of Co2 that one emits by making such a journey. The data:

90kg of Co2. I tried to visualise it but I don’t know what Co2 looks like.

Returning home tonight on the (electric) train I listened to a BBC Radio 4 program titled “The end of the world is nigh again“. I would urge you to listen to it whilst it is still available. You need not listen to the whole (30 minute) program – just the first 8 minutes or so will do (although really I think the whole program is well worth a listen), in which Clive Anderson speaks with the eminent scientist, author, researcher, environmentalist and futurologist, James Lovelock.

In this program James and other scientists speak of global warming, talking of the tonnes of Co2 that we have already released into the environment, and how there is now no scientific doubt that unless we make significant changes to our lifestyles in the next decade, this planet is going to become a very inhospitable place to live. We’re not talking hundreds of year in the future – we’re talking within the lifespans of our children (depending on how old you are!)

And yet still the world’s biggest polluter, the US, will not sign up to the Kyoto protocol (a treaty which itself is not actually strict enough to prevent catastrophe).

Whilst standing at the lights waiting to cross the main road on my walk home from the station, I watched the endless line of cars stream past. Every single one churning out Co2 that is ultimately going to kill my descendants. That gas is essentially a poison, a direct threat to my family, and to yours. And yet we choose to ignore this fact, and just see it a smelly vapour that soon gets whisked away in the evening breeze. Imagine if the threat it does actively pose to human beings through global warming was made to be felt by us, the ones who are actively producing the stuff, right now, instead of our offspring. Standing by the road, we’d breathe it in, and die.

This may be a dramatisation of the facts, but think about it, this is how it is. OK, we may be fortunate enough to have the economic means and the freedom to choose to move to an area not so badly affected by rising sea levels. We may be able to afford to buy appropriate clothing to adapt to our new environment, to pay for the air conditioner. But what about our brothers and sisters in the developing world who do not have the ability to adapt to such huge changes in the environment. What about the planet herself, all the species of wildlife that WILL become extinct?

It’s all very well me spouting off about this, but what about me, what am I going to do about it? Well, I’m going to do my bit.

The reason I’ve been hit so hard by this story today is that it makes me hear raucous cries of HYPOCRITE!

I really am ashamed of myself. I laughed it off at the time, by saying, “I shall have to plant some trees when I get back.“.

Thus, I am making a public commitment here and now, to not take any domestic flights from here on. The UK is not big enough to warrant the use of them, whilst Japan has one of the best rail networks in the world, led by the famous Shinkansen (bullet train). It may be financially cheaper, but it would be utterly irresponsible.

Furthermore, I shall avoid international flights when at all possible. Hhm, the idea of the Transiberian Express does appeal, although the 3-week element could be a bit problematic. I’m going to have to think about that one.

I also think it’s vital that tax on aviation fuel and on new aircraft be introduced. This will mean soaring ticket prices, but at the end of the day it’s only by hitting people’s wallets that they will start to take what is a major threat to our future seriously.

I also think the Carbon Credit Card is a BRILLIANT idea, and should be introduced immediately in all developed nations, and China. The following text is taken from New Scientist magazine.

Here’s an interesting idea. We’ve all heard of carbon trading schemes for industry and nations – how about for individuals? The UK’s environment minister is suggesting that all citizens could be issued with a carbon “credit card”. Every time you fuel up the car, buy a plane ticket or collect the groceries, the matching carbon dioxide emissions are deducted.

If you overspend on carbon in a year, you have to buy extra credits from those who have underspent. The minister, David Milliband, says the fact that 8 million people already have loyalty cards with supermarket Tesco shows practical difficulties need not hamper the scheme. Tesco records 50 billion bits of data a year.

This seems like a pretty smart idea to me – it’s fairly simple, links directly to people’s behaviour and has a financial incentive. The really tough bit will be setting the amount of credit each person gets – it’s easy to get it wrong.

Anyway, I have my first exam in about 12 hours. Best be off.

I’ve put a short snippet from last Tuesday’s BBC Radio 4 PM program on the TGW server, in which Tony Blair’s air travel, the pollution it causes and the steps he’s taking to compensate for that are looked into.

Listen to it here

See the preview videos at http://www.bethechange.org.uk/

[EDIT 3]
“Aviation and Global Climate Change”, is a report published on 2nd May 2000 by Friends of the Earth, the Aviation Environment Federation, the National Society for Clean Air and Environmental Protection and HACAN/Clear Skies. It calculates that the average UK motorist produces 2255 kg of CO2 in one year, while one return flight from London to Miami produces 2415 kg of CO2 per passenger.

calculate your own Co2 output:

Here’s mine, based on what I’m spend on energy every month at the moment, and including a return flight to Tokyo. 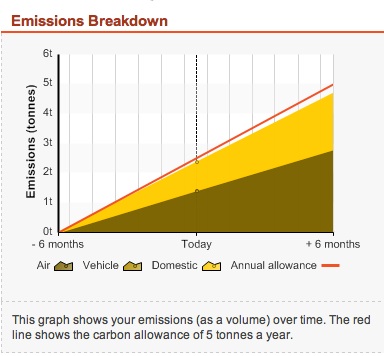