Maybe I’m becoming intolerant. Smoking, it really gets to me these days. I used to think of it as everyone’s right to smoke if they wished to, and would just move out of a smokey environment if it was getting to me. But these days, sitting in the path of someone’s clouds of exhaled smoke makes me feel like I’m lying on the pavement being vomited on. I actually get angry and give them dirty looks, like I do when people talk on the phone on the train. Perhaps I’ve been in Japan too long. I’m starting to live my whole life in “Manner Mode” (“Manner Mode” is the Japanese equivilent of ‘silent mode’ when talking about mobile phones in the UK).

It’s 1.34am and I’m in a fairly small room with 9 Japanese men. They’re all smoking. It’s all a case of what’s more important – clean lungs tonight, or a keyboard to help me empty my head. I’m staying in Japan’s oldest capsule hotel – established the year before I was born, 1977, and not refurbished since. There’s hundreds of us packed in like sardines. Apart from the sick in the sink (which I bet is the remains of what I saw that completely drunk guy eating earlier) it’s pretty clean and comfy. I’ll tell you all about it on my next podcast.

Despite being told at reception that there was no wireless network in the hotel, I have found one in the lounge, suitably named “rounge”, as is the Japanese custom. There’s another in the capsule corridor, named “rest”. No spare powerpoints round here though, so I went down to Yodobashi Camera this afternoon and bought an extension lead. Cunningly connected it to the socket that the air-con was plugged into before – no-one seems to have noticed. Apart from the man who tripped over it that is.

I watched the film “Babel” in my capsule this evening. The end theme tune makes me what to take a hold of this red umbrella that I sat below yesterday, and spin, spin, spin..

There’s the people from the Moroccon dessert looking on as the air ambulance flies in to their remote village, blasting sand in all directions. It’s a different world.

I recommend watching it without subtitles. And with a red umbrella.

I’m in Osaka. I came here to visit my good friend Sadako. She’s the friend who I first met in passing (for about 10 seconds, literally) in Switzerland, and then at tourist information office, and a train in Japan. It was only on that 3rd occasion that we realised we’d met twice before.

Yesterday we went on a day trip to Uji, the home of Japanese green tea. There, I experienced my first ever proper tea-ceremony. Very formal, almost silent, kimono’s, kettle over the fire that is sunk in a hold in the tatami floor. The most delicious green tea I have ever tasted. We met Japan’s master tea-taster; he’s often been in the news, on TV, in airline magazines etc, sharing his secrets on how to spot the perfect cuppa. He was a funny chap. I may include an extract of our conversation on a future podcast.

Uji is also home to Byodoin temple, as seen on the back of every 10 yen coin. It was very impressive. The museum, which was constructed a few years back and cunningly buried in a big lump of soil so as to not interfere with the general feel of the 1000+ year old place-a-la-history, was also a delight to behold. Fantastic architecture. 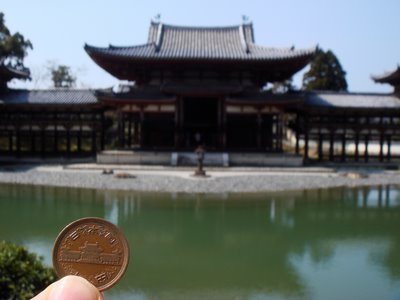 That umbrella is still spinning.

I don’t like Osaka much. It means disappointment. Disillusionment. The first time I came here, 7 years ago, I spent 2 days in a capsule hotel reading a book, only to be devastated at the end by the postscript – it had all been a work of fiction!

The initial shock was enough to see me wandering the streets pretty aimlessly, feeling lonely and depressed, as I was 7 years ago. Feeling that the ground had been pulled from beneath me. I went to the same places I went to before in search of comfort, and now, as then, I found none. I ate crap. I drank coca-cola. I could not understand what was being said around me. I felt nauseous in the crowd. I was not excited by Yodobashi Camera. I wanted to take the bullet train right back to Tokyo. I didn’t want to be here.

Things improved as the hours passed. I thought things through. I talked things through, and I found that perhaps it was not time yet to bury my dream.

I’m tired now. The smokers have retired to their capsules. Its time I retired to mine.