When learning a language, I think it’s really important that now and then, you look back on your language ability of say, 1 or 2 years beforehand, and compare it to the present. This gives you the opportunity to say “OH MY GOD! I’M AMAZING!”, and give you a moral boost during those times when you feel you know nothing.

In order to do this, I think it’s a good idea to have a movie, a certain book, a song or something along those lines to use as a benchmark.

In my case, it’s a 6 minute story, as told by the actor / film producer / personality Ozawa Shoichi (I always get him mixed up with Ozawa Ichiro).

It was about 3 years ago that I recorded this story about a cat that decides to change his life: fed up with the dried cat food that he gets at home he finds the nearby Yamada household, where they feed him Miso soup – as was the case in ancienty Japan. However, after 4 days of this diet, Blacky starts to think that maybe he’s made a mistake…

I distinctly remember the first time I heard this story. I understood very little. Ok, so there was a cat (one could gather that from Ozawa’s excellent cat impersonations alone), and it was a clearly a cat that was not happy with life. There was miso soup involved, and the Yamadas. But other than that, I was clueless.

I recall playing it to my Japanese teacher in Sheffield last year, to see what she made of his accent – was it easy-to-understand Japanese? I think she said it wasn’t all that easy, but as he was using proper, grammatically correct Japanese it wasn’t all that bad. I still didn’t understand it all, although I had gathered the main jist of the tale, that being that Blacky was unhappy with his diet and went in search of another place to eat, and then finally returned home again.

Last night I attended an event hosted by a chap whose Japanese I do find a bit tricky to understand. He speaks pretty fast, and often covers his mouth with his hand as he rests his chin. The first time I heard him speak was last October; at that time I couldn’t catch much at all.

Last night however I sat there in glee as he raced through a blurble of Japanese. Whenever a sentence came to an end I’d smile at having understood it. It was interesting to see how my brain was working to get the meaning out of the sounds. It seemed to be a case of putting aside careful analysis of each word, and instead letting it all wash over me, and leaving it to my subconscious to feel the meaning (would that be my subconscious mind, or my conscious mind not really thinking?!). For example, I’d ignore the fact that a verb was in causative-passive form, and simply grab hold of the core meaning of the verb and wait for any twists to emerge through context.

Anyway, thinking about this this morning, I remembered my Cat track, and decided to give it another spin.

Wow. What a difference a year or two makes! There’s very little I don’t understand now. OK, so of course there’s words in there I don’t know, but context fills me in where necessary.

I’d encourage anyone learning a language to find a benchmark text/audio extract/film. (I was wondering though whether films are all that effective. The thing is, if one has seen a film, looking back one wouldn’t really be able to clearly distinguish between that knowledge gained through images and that gained through you knowledge of the language. Also, one wouldn’t be able to use any film that one has seen with subtitles, as then one doesn’t really have to figure much out for oneself when watching it a second time.

The tomatoes are really coming on now. We have countless flowers, oh, and the peas are looking very groovy too. Then there’s the aubergines – the flowers have cast off their petals, and the bulbous buds of promise are slowly emerging.

It’s been baking hot here lately, with little rain, despite it being the rainy season. Yesterday I took a couple of shots down the railway line, as you do – looking at them now I found it fascinating how the heat has turned the background into a watercolour – no Photoshop filter required! 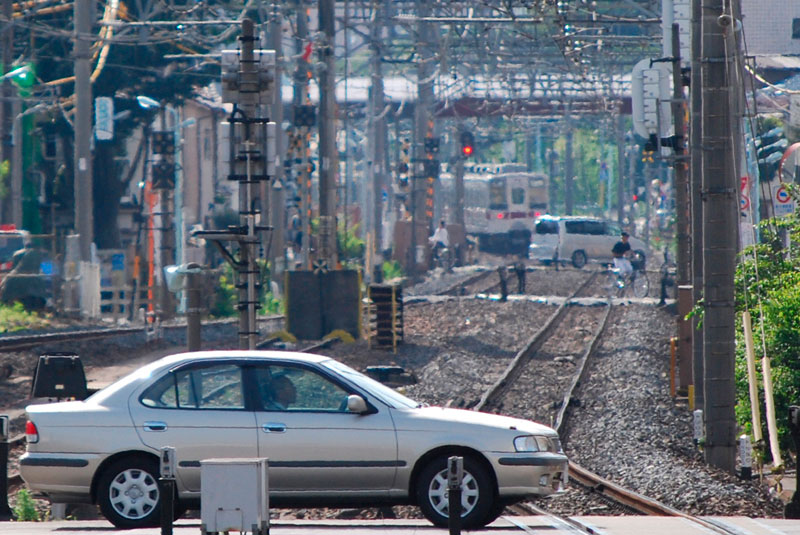 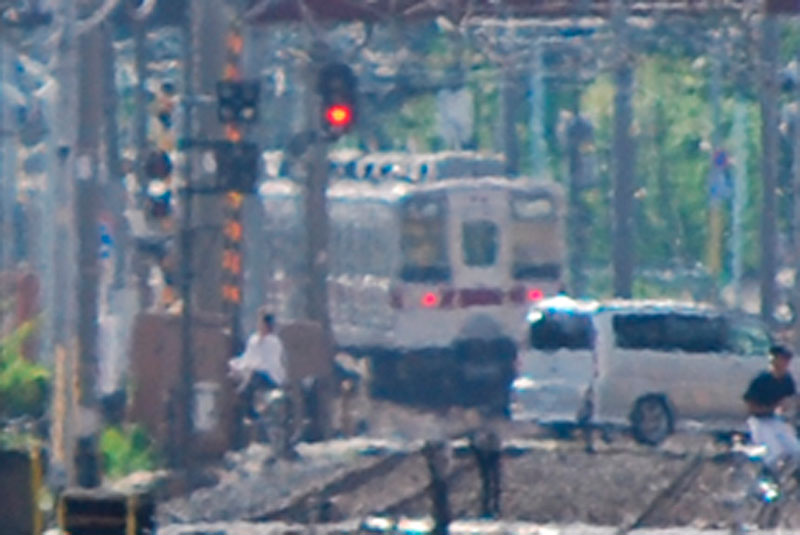 I just got an email from an old classmate from Sheffield – I’ve not seen him since 2005 when he made the decision to pursue his Japanese studies outside of the university system. Turns out he’s in Tokyo today, I’d love to see him! Now, if only he’d get out of that subway tunnel then I’d be able to get in touch with him!