We had our annual fire alarm test this morning. I always think it’s an interesting excercise, as it demonstrates differing attitudes towards life.

You know, like that of people who clearly don’t like their course, and so take ten minutes to evacuate their flats.

Standing in the courtyard in the freezing cold, you’re exposed to all sorts of attitudes. For a start there’s the first-year males who haven’t got laid yet, who see it as the perfect opportunity to strut their stuff, appearing in the freezing cold Yorskshire night in nothing but a tight pair of boxer shorts.

Then there’s the young girls who cannot be seen without their make-up, trying to wrap their heads up in their laps as they sit on a bench, cursing the “F*cking half-six-in-the-morning fire alarm”.

As we stand there, being told that we really do need to be quicker (and next time, bring a coat), the older men start to shout;

“How would you like it having to get up at f*ckin’ 6.30am?” says another chap, clearly unable to think straight at this early hour.

Having been told to “Put a sock in it! The longer you go on the longer it’ll take me to get through this 90-second bit I have to tell you, and the longer you’ll be keeping everyone out here”, they quietened down, smarting from this blow delivered right before their mates. Grumble mumble… until we’re dismissed. They try to get the last laugh by delivering a final insult to the Fire Officer, but it’s lost over the eruption of voices as we head back in.

Anyway, time for my morning exercises. 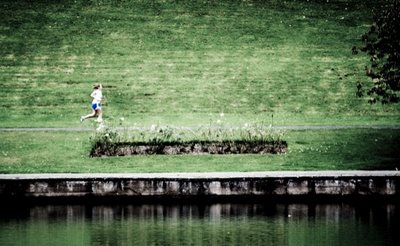