1) It kinda sucks having one’s partner the other side of the world. You look around you at the the other 150 people from Japan Society (3/4 of all members, not bad turnout at all), and you see people getting ‘friendly’, and you think,

The more old routines I go through that I used to go through with her (such as attending a Japan soc party) the more I miss her.

2) Isn’t it nice to not stink of cigarettes when you get home.

3) This no-alcohol thing is a bloody good idea. Well done for making that decision Joseph.

I know that had I not made the decision to avoid alcohol this year I would be drunk right now. I would be looking forward to a precious tomorrow spent feeling pretty crap, and unable to get as much done as I have set myself a target of doing.

I would also be feeling even more needy than I currently do, which wouldn’t really help my overall happiness levels which are, despite the wanting to be with *Twinkle*, pretty good. I tell you, this 10 ~ 15 minutes of exercise every day, this healthy diet, this going to bed before midnight, this routine of trying to meditate but failing – it’s working absolute wonders. I have never felt so good. It’s what all the experts recommend, it’s what I’ve sometimes thought about doing but never done, it’s what works.

Another advantage of the no-alcohol thing is that it’s cheap. Tonight’s party actually cost me nothing at all, as the girl behind the bar said that my drink (a blackcurrant and soda) was so cheap I could have it for free! Wasn’t that kind?

Although my Japanese is perhaps not at the excellent standard that I wanted it to be at when a couple of years ago I thought of myself returning from Japan, now I am back in the UK I am finding myself surprised by how good it actually is. I mean, normal everyday conversation doesn’t really require any effort at all now. Sure, I make mistakes all the time, but of course that’s only an issue if one chooses for it to be so.

Written Japanese is of course a different kettle of fish – but I have a plan in action to deal with that, another part of my daily routine which for secret reasons can’t be revealed here. I’ll tell you about it in a couple of weeks.

Tonight I met a guy who has the same camera as me. We got talking, and it turned out that he’s been to the first place I ever went in Japan seven years ago – Shin Shizen Juku in Eastern Hokkaido. It’s a tiny place, no-one ever goes there, yet here he was. Initial shock over with, he gestures to his friend who it turns out has also been there – You’ll never believe this, this guy Joseph has been to SSJ!!!” His friend looks at me a moment and says, “I knew it! I knew I recognised you! When I saw you at the intro meeting last week I knew I recognised you, but couldn’t remember where I’d seen you… Now I know! There’s a photo of you on the wall of SSJ, that’s where I’ve seen you!” 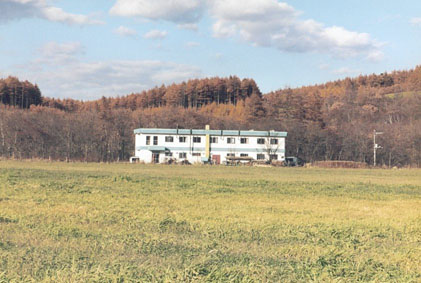 One could say “what a coincidence!”, but of course its not. Nor is the fact that only yesterday I got an email from a stranger via this website asking me what I thought of SSJ – the first time I’ve had an email about the place in seven years.

And you’re telling me there’s no ‘intelligence’ out there? I reckon the real nature of the world would make the film “The Matrix” look as animated as a piece of rock-hard playdoh.

…So yeah, coming home from the party it’s a case of mixed feelings. Sadness to be alone, happiness that everything is just so good.

4) The prostitues are bloomin’ noisy tonight.