OK, so we’re back online after a couple of days in the wilderness in search of the correct DNS settings. It was pretty handy actually, as with no access to my server I was able to learn quite a bit about population issues in China for the exam which starts in, er, cripes, 13 hours.

It’s the final exam of the season. And explains why I’m back in Sheffield. I’ll be here pretty much till the end now, except for Easter when I’ll either go to Japan or Wales. Bearing in mind the cost of rail travel in the UK Japan might actually be cheaper. Mind you, by doing so I’d be doubling my 2008 CO2 output…

I’m looking forward to my final semester. I’m planning to use my time as efficiently as possible, with extensive use of my calendar for planning, emails to organise, skype for meetings and a complete ban on mobile phone usage. In fact, the other day, when walking past the Orange Shop I decided the best way to not receive phone calls was to get a new phone number. So I did. Whilst I was intending to keep the old Sim card and put it in now and then to check for stray messages, I now realise I’ve left it the other end of the country – so I really will have a peaceful life.

As I said before, I have a Skype number, and people can send SMS messages to that if they’re desperate – the BT woman reads them out for me. Quite how Skype manage to offer a BT line for just £15 a year I don’t know – BT charge £12.50 a month.

I’m starting to get rid of ‘stuff’ in preparation for my return to Japan too. The first thing to go is my printer, which is being sent to the now Mac-equipped parents in a bid to persuade mum to finally stop using my 1930s word processor which will leave everything she types in some obscure format that our grandchildren won’t be able to read. I plan to start to sell / give away the remainder of my books soon, followed by the collection of stationary that I’ve been hoarding for uni (Oh! Woops! I’ve nearly graduated!). It’s all a part of the bid to make myself less materialistic, to encourage the belief (fact) that I am but a temporary keeper of all of this stuff – letting go brings liberation!

This weekend I have my first job as a ‘professional’ photographer. I’m to receive a briefing from a local design company tomorrow, following which I will go to www.google.com and type “How to become a professional photographer”.

Looking forward to the interview on Tuesday, should be groovy. Go down London town with my classmates. Have to make sure they don’t try and push me (or each other) off the train as we’re all vying for the same job, and competition is intense.

And then there’s classes. I’m liking my timetable, it’s nice and empty, and those times when I do have classes, they are held by people who are possibly the nicest lecturers to have the misfortune to receive Sheffield University ‘salaries’. They often send a hat round at the beginning of class in order that they can afford to pay the coal man when he brings his sacks of anthracite around the 5th floor of the arts tower.

Oh, speaking of which – have you seen the Arts Tower in Google Earth lately? It’s been updated, and now features the McMillan nurses appeal daffodil!

Real life photo by me: 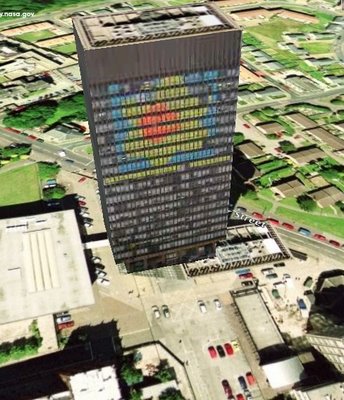 When I was demonstrating Google Earth to ma and pa yesterday we found my uncle’s yellow car parked in his driveway. Verrrrrrry exciting.

Right, enough rambling. It’s off to the Info Commons for me for a final bit of distraction-free revision.