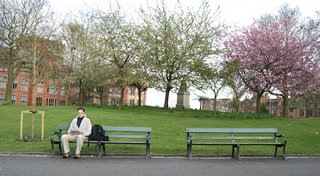 Most days when I wake up I have a list of certain things I need to do. Each of these things usually comes with its own emotional context, which may be a construct of my unconscious relationship with the building that it’s in, the people it involves, the physical actions I’ll have to perform.

Wednesdays tend to be weak in context in the first place, as I have no classes, no set routine. It’s the day for odds and ends. Today’s odds started with the notification from the embassy that I’d not been offered a position. I didn’t have any prior experience to attach this news to, and so it’s been kind of floating around all day (I visualise the news as being on a piece of cotton hanging down from the roof of a cave for some reason. I think the Japanese government is the cave).

Then there was a mini-rehearsal for tomorrow’s dramatic debut of the Alison Quartet, a new theatre group that has been established by a few of us from Japanese Studies for the purpose of presenting hard hitting messages in a moving, yet humorous way. U-Card holders can see us for free, we’re performing in CILASS Collabratory one at about 1pm tomorrow. It will be videoed so extracts of our performance may appear on YouTube afterwards.

This afternoon I’ve been to a couple of leaving ‘gatherings’ for two members of university staff who finish work today, and who will be very much missed by their respective departments, and by me.

The first is Mark Morley, who just for the Google Record, is one of the most friendly, enthusiastic and funny members of staff at the University of Sheffield. It’s Mark who’s been the secret power behind the Student Ambassador Network’s Tech Group, as well as the source of enormous amounts of good humour that permeates the entire department. He’s the kind of person who you’d like to keep in your pocket (if he were pocket sized), so when you’re feeling slightly down you could pull him out and ask him to say something . If he did that, you couldn’t help but smile. The second gathering was held for Jenny, beloved SEAS secretary, who retires today. I recently wrote about the family feel at SEAS – and Jenny has been right at the centre of that family. In a way she’s been a kind of surrogate mum for some of us who are a long way from home. She’ll be missed.

Seeing these staff retire / leave for other departments gives me a feeling of finality, like the final bit of this uni thing has begun with earnest. Tomorrow will reinforce that no doubt, as it’s our final in-class assessment for Japanese language.

I’m in the library now, looking out on Weston Park, which is currently undergoing a makeover. The workmen have gone home though, and the birds are a tweetering, beckoning me out.

I think it’s time for a breath of fresh air.