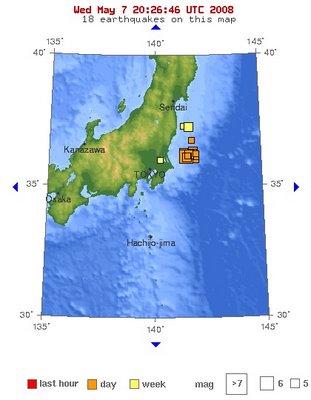 Seven pretty strong earthquakes 100 miles from Tokyo today. I tend to worry when that happens. makes me wonder if *twinkle* is OK, as her parents’ house is pretty old. If she’s OK, it’s likely my other friends are too (and she’s fine, texted me news updates as they struck!) (although of course if it was a really big one, not like the ‘4’ it was in Tokyo today, then I’d make sure I contacted all of my friends too [don’t want them feeling unloved]).

I took a trip back in time tonight, by participating in the university’s Mature Student’s Open Evening. Sitting there listening to the finance chap explaining about FundaFinder, student support talking about the mature student’s committee – wow, it was like 2004 all over again.

And the questions, exactly the same questions I’d asked 4 years ago. Except this time I was one of the people at the front of the lecture theatre helping to reassure everyone.

I find it interesting trying to read audiences. Initially, I was a bit concerned that they weren’t having fun. I’d tried beforehand to amuse them when giving a tour of the IC, but they hadn’t really responded. I think a lot of them were quite nervous: as one lady said to me afterwards, she felt like an impostor, that she shouldn’t really be in a uni full of students. That reminded me of how I’d felt. For a moment I was able to forget that everything was familiar to me and see it as that big scary university that ‘students’ went to. After only 4 years I feel like a part of the brickwork.

Anyhow, back in the auditorium it was my turn to introduce myself.

What is it about public speaking that excites me? I don’t know. I just love it. It’s like a drug. I told them a couple of stories of some rather stupid things I did when I started uni – that got them laughing (at me, not with me).

It’s a shame I don’t have anything interesting to say that I could turn into some kind of show :-p

I got paid for tonight’s efforts too, money that will go towards the wedding fund. Not only that, but I was able to bring two huge left-over platters of dips, wraps and desserts home from the new and improved uni catering service. Should stop me buying chocolate for a while.

Oh, and this morning I got paid for writing a short article about my uni experiences for a newsletter, perhaps the first time I’ve ever been paid to write anything (outside of CILASS). It felt good.

I had a consultation with a CV expert this mornin’, armed with a document that hasn’t been updated in 12 years. Sure, it’s had stuff added to it, but no change in format. I was surprised by how much CV standards have changed – it seems these days it’s ok to do away with a work timeline, and instead use wig wiggy stylee web two point woah woah wigness to portray your experiences. I shall endeavour to make it as exciting as possible. I was also thinking, perhaps I could record a mini-self intro and post it to YouTube – that might make an impression upon employers (“bloody hell, he really is as much of an idiot as suggested by his personal statement”). I’d just have to be careful that I didn’t show my profile, or I would instantly be cast aside for having an oversize nose.

Ok, enough jabberwocky. Best get on with dealing with this frumious Bandersnatch.