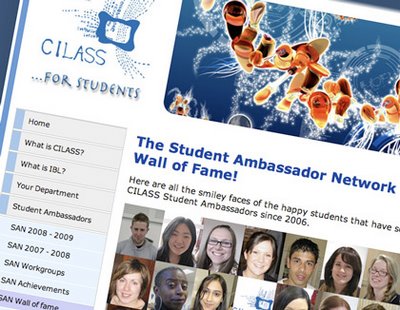 This mumble features a fair bit of bathing in my own glory (so no change there then).

I’m delighted to say that the CILASS for Students website is complete. It won’t be officially launched until the next academic year, but I won’t be around then, so I thought I’d quietly launch it to my friends now …as I made it 🙂

The aim of the student-targeted site is to promote an understanding of and engagement in Inquiry-based Learning, raise
awareness of the work that CILASS does, and provide an opportunity for the amazing Student Ambassadors to tell the world about the incredible things that they do.

It’s based upon an original site created last autumn by all of the CILASS Student Ambassadors, with further input from the CILASS core team. Being an ‘official’ university site, last year’s attempt to communicate with students was severely limited by the uni’s CMS (Content Management System) which basically guarantees that even the most exciting of ideas end up looking about as interesting as a pile of rotting onion skins. Here’s the most exciting page on the university website :-p

I think it was around March when I proposed that we do our own thing. Take it out of the university template. Create our own site from scratch. I wasn’t really imagining that I’d end up creating a 50-page site. Bloomin’ crazy idea if you ask me, end of my final year and all. But it was something I really wanted to do, so it just sort of happened. I was able to use the material supplied by the SAN for the first site, and benefited from lots of feedback from them during the development process – special thanks to Emmy and Ali.

I must say, I’m really pleased with the result, and I’m delighted by the response it’s received. The CILASS core team have been very complimentary; seeing the site for the first time the director told me it had made her day. The university’s Pro-vice Chancellor for Teaching and Learning also emailed to say how good he thought it was, whilst central support staff were also very impressed by how comprehensive it was – yet studenty in appearance.

I should add that it is still in need of a lot of padding. My goal was to create the basic structure and core content – the plan now is for the SAN to fill in the holes and make it into a great resource.

I’d like to thank Sabine and Nicola for allowing me to do this, for giving me the freedom to pursue the project in google 20% time style.

I’m now in the process of creating support materials for the site (using the gorgeous Screenflow – OS X 10.5 only). One fear of mine (and of the core team) is that without me there to supervise the site might fall into dissaray (look what happened to the beautiful site I created for Milky House 5 years ago! Talk about cannabalisation). Thus, support material is vital.

I’d like to be able to use the site as a part of my portfolio. I don’t see myself going into website design for a living, but nonetheless, I think it’s a good demonstration of versatility (and I don’t want to be pointing employers at TGW now do i?!).

Thanks to everyone who contributed, a great team effort! I look forward to seeing it being developed further over the next year.