The wedding website has now be updated to reflect the post-wedding reality of our present existence. Anyone interested in taking a peek can find it at www.twinkleandjoseph.net (with the name ‘twinkle’ being replaced with a name she uses in 1st life). The username is ‘guest’, the password ‘banana’.

So there we were. Married, with the church bells ringing. Very happy (I was then able to freely talk to *Twinkle* and tell her how gorgeous she looked).

The next 15 to 20 minutes were very surreal. There we were as a bride and groom, surrounded by about 80 people with cameras. These were friends and family who represented so many different aspects of our lives, all gathered in the same place. I was at a loss as to what to do, feeling concerned that I should be ‘doing something’, that I should be making sure everyone felt included. It was a hopeless task though, so after a bit I decided to stop trying to read everyone else’s thoughts / feelings / desires and just *be* with *Twinkle*. With The Tames (and Elaine)

Once the family photos had been taken we proceeded to our car – and what a lovely car it was! I’d seen it in the garage a few days beforehand, but now it was all decked out in ribbon and flowers. ha! That was fun, rolling down the road in the Alvis, waving bye-bye to people in the assumed manor of posh people from the 1930s. 🙂 That was such a happy car journey. Dream-like in its perfectness.

A few minutes later we were at Orcop Village Hall, location of the reception. The forecast rain had not come, and all on was track – let the party commence.

…oh, after a bit more surreality. Brother Stephen led the champagne toast (devil of a job to make it without electrocuting yourself), then there were calls for a speech. I’m not a big one for speeches at weddings, and have been known to do some pretty illegal and stupid things in the past to escape from them. Mind you, the speeches at Catherine and Stewart’s wedding the previous week had been really good, meaningful, and funny (and not too long!).

There was only one problem though: The notes I’d written for my speech were in my rucksack, and that was in the car …and the car was at the church a mile up the road!

*Twinkle* and I had been discussing a few ideas about what we might want to say – THANK YOU being the most important. Thank you to everyone who helped make it happen, thank you to everyone for coming, thankyou for everyone’s support of us as a couple. Really, we couldn’t have done it without you.

Then, perhaps a word or two about how me met (the gatecrashed sushi party), and how we decided to use one another for our studies (*Twinkle* using me as half of a case study for her Masters Dissertation on Intercultural couples, and me using her for speaking practice for my BA Japanese Studies degree). Finally, a mention of how 2 years living in minute shoeboxes together and then 11 months apart (with 2 brief respites totalling 20 days) really helped us to test the relationship, and become more sure than ever that this was the right thing to do.

As *Twinkle* said, despite the distance and my lack of awareness of her everyday routine (and therefore ability to provide context-based advice), I was still the one that she first wanted to turn to, to share and discuss things with.

I felt the same.

There was also that feeling that we both had (and which still continues with us being parted once again), that feeling that we were together all along. We are with one another at all times – I can feel *Twinkle*s presence. She’s with me now here in Orcop at 10.11am as she goes about whatever she’s doing at 6.11pm in Tokyo.

It’s a first for me, to feel that for such a prolonged period of time.

Following my mini-speech, it was time for the cutting of the cake. When asked by mum what kind of cake we’d like I told her to use her imagination, and as you can see, she has a pretty wild imagination! We then had a couple of hours ‘free time’, partly to allow *Twinkle* to get changed into her wedding kimono, a beautiful family heirloom. I also changed into my organic fair trade cotton clothes, which felt much more *me* (should have sorted out my collar though). When it came to food, we’d decided to make it a bring-and-share affair, and boy-oh-boy was that a good idea! Our guests brought the most delicious dishes, and lots of them (I was frequently made fun of that evening for having worried that there would not be enough to feed everyone).

Main courses and desserts, absolutely gorgeous. (*Twinkle and I ended up taking three huge bowls of desserts back to our honeymoon hotel too 🙂

It was after all the proper wedding things were over with that I was able to truly relax (I think had I not given up drinking last year I would have been completely plastered by this time). It was just a shame that I hadn’t brought my clone – so many people I wanted to talk to and so little time to do so!

It was so good to look around and see happy people everywhere. Groups of friends inter-mingling (“Oh good, good, so-and-so is talking to so-and-so, I knew they’d get on well!”). Some were outside on the grass, sitting on the straw bales, others were sitting at our beautifully decorated tables chatting and eating, or hanging out right by the buffet tables… hmmm, it was nice. 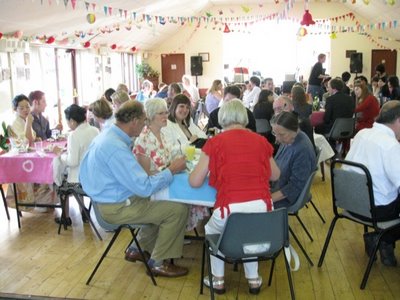 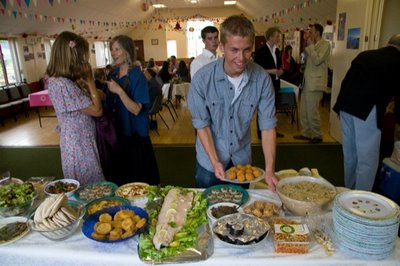 Later on the fantastically talented and very lovely members of Wiffeldy came on to play some lovely tunes …and then get us dancing with a ceilidh! 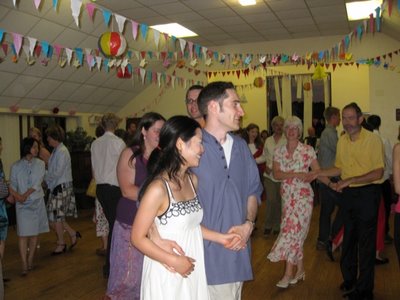 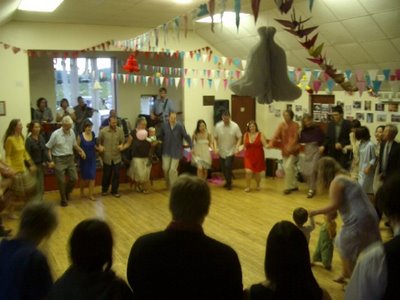 Ha! That was such fun, I just loved it (as did *Twinkle* and a lot of our guests I think). I love ceilidhs. What a great way to party. Caw blimey. You know what was really nice though, was seeing my in-laws embrace their first encounter with this kind of madness. And other friends too who had never experienced the delights of a barn dance, really giving it their all.
By now it was growing late. What a great day it had been. Just perfect, it couldn’t have gone any better. Like a dream.
It was time for us to retire to our honeymoon suite. We said our goodbyes, and made the 10 minute journey to the Pengethley Hotel …when I realised that I had neglected to sort out a night key, and everyone was asleep (with no night porter). I had visions of us having to go back to mum and dad’s on our wedding night, and having to share the front room with my sister, her husband and a baby (it’s not that I don’t like them…!)
However, after ten minutes of knocking on windows and ringing what I thought was the doorbell, I spotted a half-naked man looking out of an upstairs window. It wasn’t long before he opened the door to us, and we made our way to our lovely suite.
It was so nice to be together, married, eating left-over dessert and opening the many many beautiful cards that we had received. Everyone was so generous with their gifts – we are deeply grateful.
And with that, our wedding day came to a close.
Thank you so much for all involved. You made our day.
Thank you also to my dear cutey, *Twinkle*, for being my dear cutey, who I’m so excited about spending the rest of my life with!!!
xxx
Photos: John Dinnen and other guests – thank you
Tagged happinessrelationshipstwinklewedding