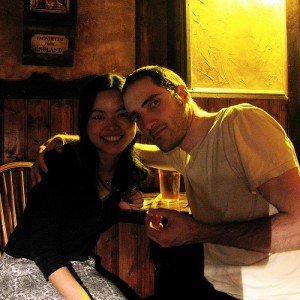 After several months of a relative lack of action outside of work (ok, aside from a marathon), I’m starting to feel fired up again. As many Mumblers know, last year, much of my energy went into producing a number of podcasts. I’ve not updated these for some time now. The podfade was part-planned, and partly due to my no longer feeling the need to produce them. They’d fulfilled their purpose. It was time for a break.

Recently, I’ve been getting back into film. A video project at work has pushed me to actually re-learn Final Cut Pro (video editing software) using more than trial-and-error (it’s early days but we’re getting there!), and my friendship with an award-winning film producer means that there’s a big project on the cards that could take us to some film festivals in Europe next year.

I’m also delighted to have been asked to be the Social Media Team’s Multi-Media Lead for this year’s TEDxTokyo – an event I’m delighted to be a part of.

*Twinkle* and I have been doing a lot of talking about our future recently (partly as she has been pretty ill and so we’ve had more time together at home). We both have a lot of ideas for creative projects that we would love to turn into reality, projects that would ultimately enable us to work from home together, and give us the freedom to raise children in the manner that we would like to. We’ve been talking about some of these things ever since we first met, but until now have not made any steps to realise them.

Well, that’s not entirely true. In fact, everything we’ve done until now can feed into our new venture, which, for reasons you may be able to guess, is called Wild Penguin Media (laughter invited). In my case, for example, working at that Japanese company was invaluable – seeing how business relations were fostered (or not, in that company’s case!!). In my present job I’m learning a lot about marketing, and seeing how a small business is run. The social network presence I’ve built up over the past 18 months has huge potential, especially with the recent addition of Japanese contacts.

The key, as 1,001 business books will tell you, is to follow your passion, to believe in yourself and your ideas, and to act on them – and don’t let anyone stop you! I think we’ve been sitting on our potential for too long. It will never be the ‘right time’, and we will never have all the resources we think we might need to start a business. We just have to get started with what we’ve got, and the resources will come when they are needed.

I feel that we are in a very fortunate position – we’re young, intercultural, we have ideas and passion, we’re good with people, and we have a burning desire to succeed. I think we’re vastly under-exploiting our abilities at present.

You may think that you’ve heard me talk like this before, and perhaps I have. The difference this time is that this is something we’re both committed to doing – and that changes things.

I’ll be talking more about the nature of the business and the projects involved when appropriate. We’ll be doing all this in our spare time around our current commitments so it may take some time, but it’s going to happen!