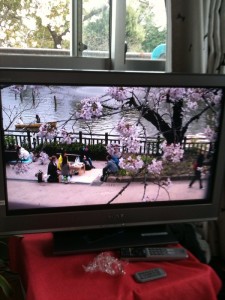 We held a little hanami (cherry blossom viewing party) today. It was a quiet affair (so please don’t be offended if you weren’t invited!). Partly as a joke, I set up our HD video camera on the veranda and connected it to the TV – bringing the cherry blossom into the house: “These days things are only real if you see them on a screen”.

The thing was, the cherry blossom on the TV seemed even more beautiful than the real thing that we could see just the other side of the glass doors! That was a little worrying.

The photo above shows how I had the camera at one point – zoomed in on our hanami spot by the pond before everyone had arrrived and we’d got properly set up. We later moved inside when it started to rain.

Tonight, I set up our spotlights to illuminate the cherry tree. Beautiful! It was lovely to have a few friends round, eat, drink and be very merry.

This was our second hanami this weekend, the first having been yesterday at Invisible Gaijin & Doramimy‘s – the #YouGuys BBQ party. Everyone there knew each other through Twitter – it’s funny how normal it feels to meet a big group of people you’ve never met in the flesh before – and feel like you’ve already met many, many times [photo of us all]. Thanks to everyone there for your friendship 🙂

We have a new toy in the house – a massage cushion! Its surprisingly strong. You can lie on it, put it behind your neck, sit on it, or probably do other things with it… It’s our first non-essential household luxury.

Last night saw a bit of a turning point for me this year – the realisation that I need to start using Omnifocus again. I’m now involved in 6 fairly big projects outside of my day job. Until now I’ve been holding everything in my head – but that doesn’t work for me really. I tend to feel the weight of all these to-dos, forget what I need to do next, and then fail to reach my goals. Omnifocus allows me to dump all of these thoughts and lists in a database, which is then auto-synced to or from my iPhone / Macbook (depending on which one I’m using at the time) – I can then deal with them in order and quickly get a clear idea of where I am. I thoroughly recommend omnifocus for single-users. For teams, I’d recommend Basecamp (although the free version is pretty limited).

Anyway, a busy week ahead. I have that interview with IT Media News tomorrow, and meetings scheduled for most week nights. There just aren’t enough hours in the day! 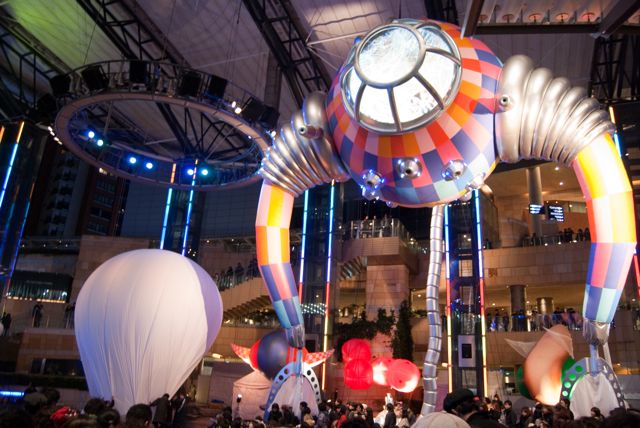