You may remember that towards the end of the Tokyo Marathon, I was stopped by a family whom I’d never met before, who’d seen what I was up to and decided to prepare some bread to give to me when I passed them. It was a very kind gesture – I was touched. 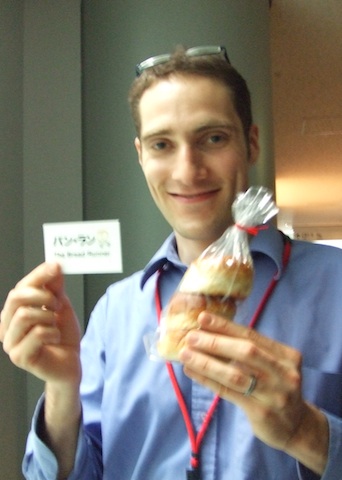 In an unexpected repeat of events, during the final session of TEDxTokyo at Miraikan earlier this month, another volunteer came to me and told me that there was someone to see me in the corridor. Somewhat surprised, I made my way out and was greeted by Eiko, a.k.a. cooltiger / The Bread Runner. We first met at a party my friend Stu’s place last year – she’s an artist and was working with them on a ‘finger food’ event – drawing the hands.

Her latest project is pretty cool – she’s running all over the place, stopping off at good bakeries along the way to try their fresh bread products, and then documenting it all on her bilingual blog.

So it was that on the day of TEDxTokyo, she’d chosen to run Odaiba – and having seen me tweet from Miraikan, decided to stop off with some very special bread for me from a 100-year-old bakery in Tsukiji. It was delicious – just what I needed to get me through to the end of the day, having missed lunch due to that being the busiest time for us on the live broadcast team. As you can see, I was pretty out of it…!

cooltiger also gave me a Bread Runner card, spreading the word about the project – anyone can take part.

I hope to go running with cooltiger myself when I’m back up to speed. At least that way I can eat a load of nice bread and not put on any more weight!