It’s the second day of our Golden Week Holiday, when the government cunningly stacks 4 public holidays on top of one another to force people to take a prolonged break from the office. A mighty fine idea me thinks. *Twinkle* and I have been seeing much more of one another lately, and have been loving it. Really feel so fortunate to be together. The week before last we finally made it to the Four Seasons Hotel in central Tokyo. Our stay at what has in the past been named “The Best Hotel in all of Japan” by several industry bodies was a gift from HSBC and the University of Sheffield – a prize in a raffle at the British Embassy last year. 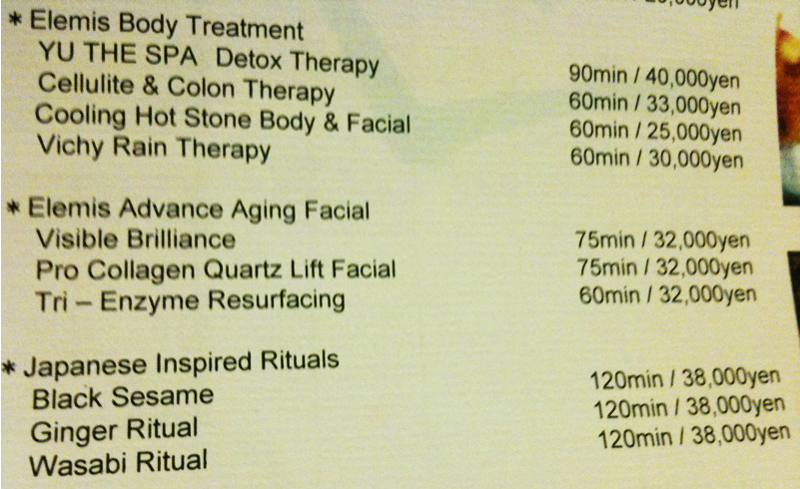 Wasabi ritual anyone? (..?!) What struck me the most was the price of their carwash service – a “Body Courting Deluxe Carwash” was 20,000 yen (£139! Did that mean that they brought some sexy Ferrari along to seduce your Mercedes? Not entirely sure. The other thing that struck me was the notice on the room safe stating,

“This is not for the safekeeping of valuable items”

Hhmm. So it is worth the money? Well, if you can afford it, then ABSOLUTELY! It really is a fabulous hotel. The service is faultless, with staff being so helpful and polite it’s almost embarrassing. They’re happy to engage with you whilst not prying – they must have a pretty good training program in customer relations. (I was also very impressed with the way the porter carried my incredibly heavy rucksack to my room on two outstretched fingers) Unlike most hotels I’ve stayed in our room was larger than a shoebox. Much, much larger. In fact, in square metres it was larger than our home. What a treat to have a king-size bed (with a mattress that was the perfect firmness), a bath that could be filled in about 4 minutes (ours at home takes about 40 minutes), a telephone and remote control by the toilet, luxurious dressing gowns, remote-control blinds and armchairs that reminded me of home. The highlight of the room however was the view over the gardens of Chinzan-so. I was stunned that a central-Tokyo hotel *could* command such a view. A little more about the gardens:

The area, also known as “Camellia Mountain”, was the estate of Prince Aritomo Yamagata, a noted politician and state man during the Meiji Era (1868-1912). Naming his manor “Mansion on Camellia Mountain” it was the site of important govenrment meetings and conferences of which Emperor Meiji was a participant. Later, Baron Heitaro Fujita commissioned the construction of historic monuments and also developed the beautiful grounds. The Chinzan-so Garden covering an area of upwards to 66,000 square meters is rich in historic remains and artifacts, all relics of the past that shouldn’t be missed when visiting. There’s a couple of restaurants tucked away in the garden, including “Mucha-an”, where they serve very reasonably priced lunches and evening meals from 900yen. Highly recommended. 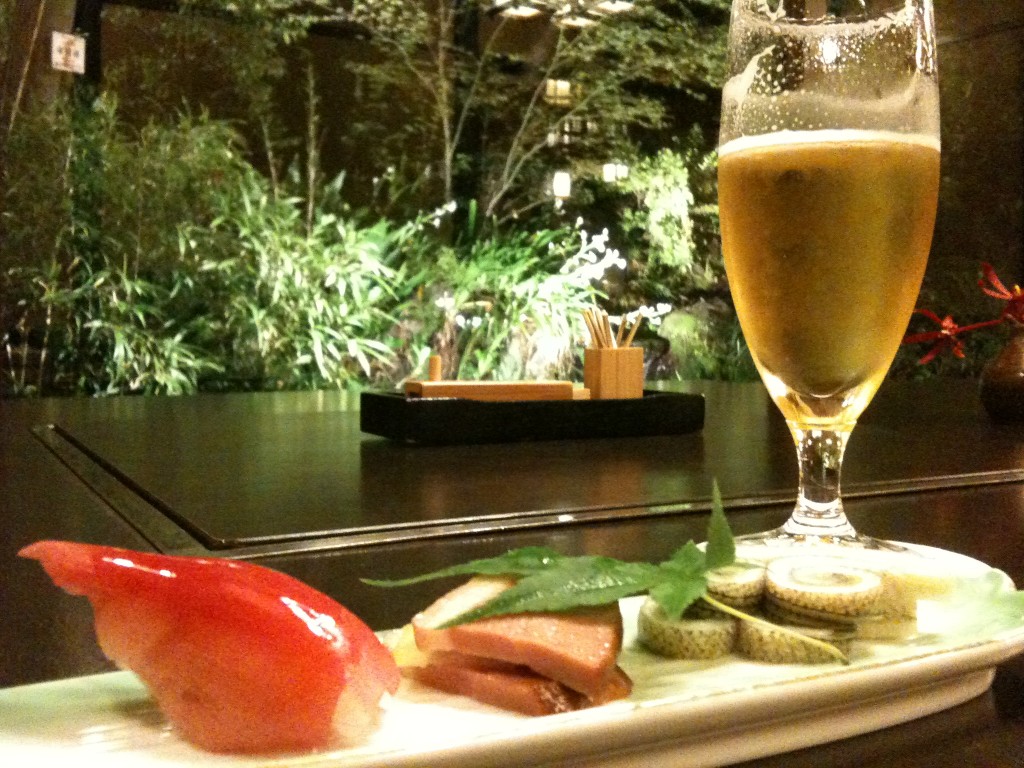 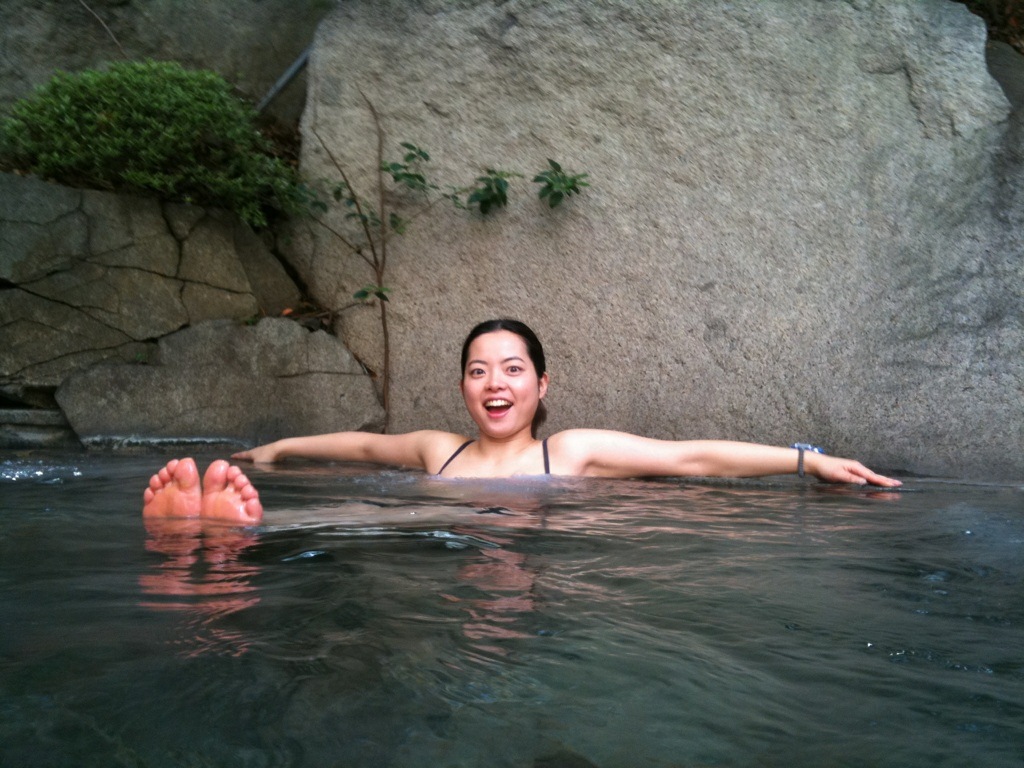 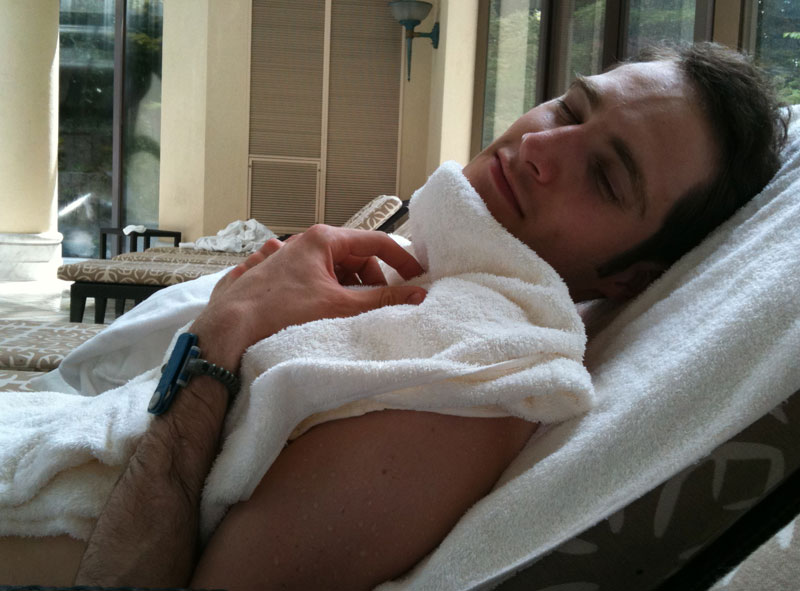 The spa is also pretty nice. There’s a fairly large swimming pool, along the length of which runs a large jacuzzi. A couple of saunas, and outside, a lovely little onsen with natural water imported from a hot spring in Shizuoka. It was nice to experience that kind of luxury, to get a sense of another reality out there that is the norm for some.

My presentation at PechaKucha a couple of weeks back has led to the opportunity to work with Mark Dytham & co of Klein Dytham architecture (founders of Pecha Kucha). Next weekend I’ll be managing the livestreaming of a very special event with Cameron Sinclair – founder of Architecture for Humanity. Details to follow. Additionally, I’ll be meeting with a marketing company in a couple of days regarding live streaming events for their clients. We’ll see where that leads.

I’ve made an effort to improve the quality of the mobile live video we can provide by obtaining the converter necessary to use the Canon HFS11 as a livestream camera. Of course, when live streaming in areas where there’s no wired broadband or wifi broadband we’re still limited to the maximum speed that the emobile 3G data network can provide – but having a good image in the first place makes a huge difference.

We also now have the ability to use plug-in mics or the high quality shotgun mic that sits atop the camera, thus improving sound a great deal. Ideal for noisy situations where we’re trying to interview people. For events where we have to be mobile (where the action is a moving target going down the road for example), I’ve created a portable rig out of a modified rucksack, and a Macbook. My field trials show that we can get about 90 mins out of a single battery, so with my two that’s three hours of completely mobile action. If you switch the batteries quick enough you only have a few moments of downtime – the next step will be to get an external battery pack, and exchange the Macbook for a Macbook Air. Prep for TEDxTokyo (May 15th) continues. There’s a lot to do, but I’m sure we’ll be able to pull it off.

When it comes to my life outside of my work at WRP, hardly a day goes by when I don’t think about how I should make the most of my time. With interests in so many different fields it’s difficult to sense where to go next. Are the small successes in some areas indications that I should follow one of those paths, or were they one-off flashes with no real future potential?

I feel that until I choose a single path to focus on, I’ll be left in this current limbo. It’s not necessarily a bad limbo to be in. Actually, I think it’s kind of necessary. I need to try a variety of things to find where my passion and skills can be used to their full potential. It’s important that I filter out opportunities that ultimately are just entertaining distractions, and learn to recognise when something comes along that fits in with the path I *should* take. It’s becoming clear that it’s going to be somehow connected with media / technology / people… (well that narrows it down!)

One danger is that I just sit back and wait, excusing myself by ensuring I’m kept busy with short-term projects, that I ‘don’t have time’ to deal with the bigger picture. 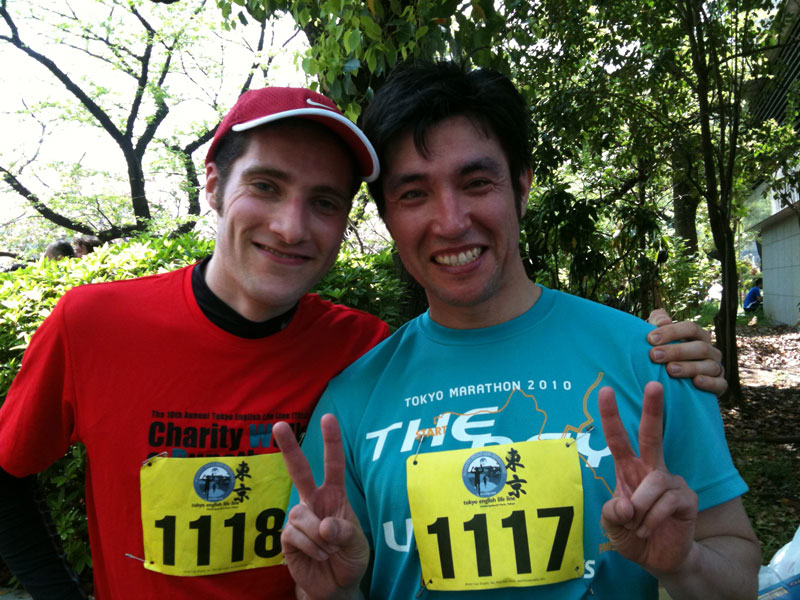 Yesterday I took part in the Tokyo English Life Line 10km Runathon. It was the first time I’d done over about 6km since the Tokyo Marathon. I didn’t feel too confident at the start – on Friday I’d gone for a training run and had to retire a little over halfway through my 1hr session due to knee pain. 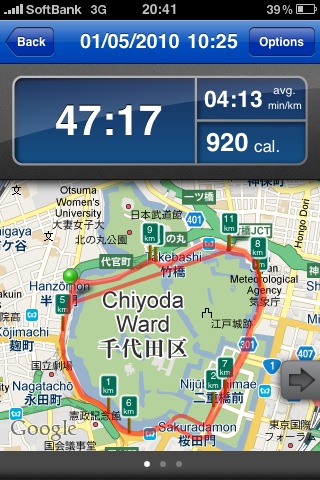 I was very happy to be able to join Tom (whom I ran the marathon with), his son Jay and parents Ann and Shigeo (visiting from the UK) for the event; Tom and I would run two circuits of the 5km Imperial Palace route, the three of them would walk one one circuit.

We set off pretty slowly, then slowly picked up the pace as the crowd thinned. It wasn’t long before my knee started to hurt as it had the previous day, but I decided to think of it as ‘warm up pain’, that would wane if I kept going. At 7km it was pretty bad, and I began to hobble a little. It was then that I got my iPhone out and plugged in to some running music – having that filling my head helped take my mind off the pain in my knee, and I was able to continue.

This was the first time that I’d used Runkeeper to track my route in a race. This iPhone app has recently been updated so that it now provides in-run feedback about your pace and distance. This was incredibly encouraging as I reached 8.5km: my pace was 4m45s per km, the fastest I’d run for a prolonged period. I realised that there was a chance I could break my personal best, 47 mins set the year before at the same event. And sure enough, I did, coming in at 47mins and 17 seconds.

[In writing this blog, I thought I’d better double check my time from last year, and found this video …in which I complete the race in 45 mins! So, turns out I was slower this year! Nevermind. Considering I didn’t think I’d get to the end I think I did pretty well!]

We’re staying at granny’s house tonight in the west of Tokyo. We don’t see her often, but she does enjoy us coming to visit. It’s a good chance to relax too – being in a different environment helps me look at things in a new light. The remainder of the Golden Week holiday will see me take time off work, have a few meetings re. live-streaming related stuff, and work with *Twinkle* on getting a project off the ground that we’ve talked about for far too long without doing anything about it. Looking forward to a relaxing but productive few days.