Affordable fruit is one thing I miss about my hometown of Herefordshire. Back there we have fruit trees in the garden, orchards down the road, English Cox’s (an apple variety) in the shops that cost a fraction of these apples pictured.

Bananas are cheap but lack taste, it having been bred out of them.

To be fair japan has rich fruit-growing areas too. When I worked in Shikoku we were surrounded by mikans, whilst travels in Aomori saw me stuffed with pears and apples.

And actually, when I’d gone about 10km from home during my run yesterday I suddenly found myself in an orchard. It was on a steep slope, the side of one of those little hills that’s somehow managed to survive urbanisation.

It took me a few moments to register. When it did, I stopped in my tracks. A huge smile spread across my face, and a great feeling of happiness came over me. I soaked up the green. I could have been anywhere! Shikoku, Greece …but certainly not halfway between Tokyo and Yokohama! 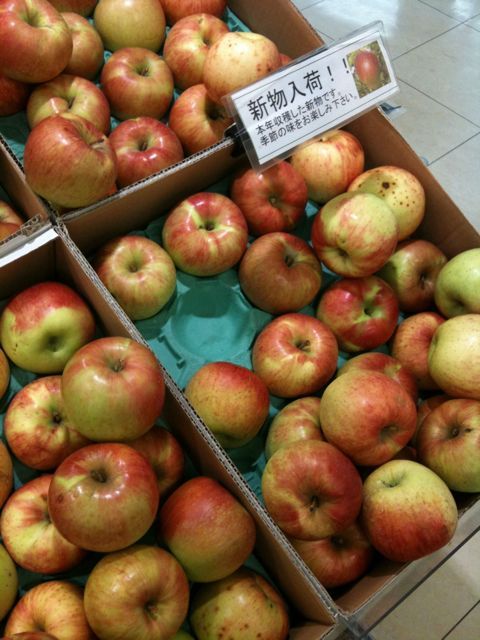 Been a funny day today. In some ways a little frustrating, as I spent about 4 hours trying to do the simplest bit of coding in MS Office Access, but failing. I’m hoping I have an early morning breakthrough tomorrow as I have every time I’ve run into a difficult problem with it so far.

Despite the frustration, I didn’t really feel all that frustrated. Which I was happy about. Those books work wonders :-p

The view from the office balcony: looking between the neighbours Last night’s sloppy blog post did cause me a bit of disappointment, disappointment with myself. However, I’ve decided to take it as one of those precious lessons, and thus something to be grateful for, not regretful of.

Work at the office is starting to pick up now, with my telephone-conversation ‘classes’ (5 minute phone calls on topics such as personal info / directions / social issues in Japan) now taking up about four hours a day. [My job is firstly: taking 5 min conversation calls and marking written essays from my 300 students. Secondly: recruiting teachers for in-company classes throughout Japan]. The lower level calls are pretty easy, allowing me a little brain rest as I go through the routine. I find the higher level students really stimulating though, especially those who have lived abroad or are non-Japanese – being exposed to other cultures makes a huge difference in terms of attitude towards life.

As the departure of my British colleague approaches so I’m being slowly trained in what will be my new job. My core role will be recruiting new teachers, which necessitates a lot of good ole’ human interaction, not just with potential employees, but also with many of my Japanese colleagues. This is something I positively look forward to – I really want to improve my Japanese, and this will provide me many opportunities for doing so. It will also give me the opportunity to develop a new teacher-recruitment workflow. Whilst the existing system works, it is pretty laborious, requiring far too many tedious stages that could either be automated or scrapped. I’ve started thinking how I might work this. Ideally, I’d like to be able to use my Mac to get it all sorted as Japanese Windows XP is pretty pants when it comes to automation (and more importantly it lacks the sex appeal of Leopard), but there may be some issues with data security, i.e. carrying a laptop to and from work each day. One way around that could be to keep everything on the shared server, and just use my mac as a portal. Well, we’ll see.

Tonight I had my first tandem learning session with my new (qualified) Japanese teacher, who also taught my classmate Phil and whose brother taught another classmate of mine (all ‘coincidentally’). Bloomin’ marvellous.

As mentioned in previous posts, whilst I do use Japanese at home with *Twinkle* at times, on the whole we’re using English so that she doesn’t forget what she already knows …the idea being that I use Japanese everywhere else. Which I do, but not very well. I’m too inclined to fall back on familiar grammar patterns, or simply Japonize English words. At work I tend to give up when I hit unknowns, like today when trying to explain the problem I was having with my database. Everyone speaks at least a little English, so it’s only too easy to do.

My new teacher, Nami, gives me the opportunity to take the time I need to recall the vocab I’ve already learnt (but is buried at the back of my head). She corrects my persistent errors, and explains terms that I hear often but don’t quite understand. She teaches me new vocab. Reminds me of kanji meanings. Prompts me to use polite Japanese.

Polite Japanese is possibly my weakest point. Yes, I can use it if I think about it, but I have a bad habit of slipping into casual speech. With Nami, I deliberately stick to polite / formal japanese in order to help develop that habit within me, as I’ll need it if I’m going to do business in Japan.

She also took the time to explain to me the ‘all new’ Japanese Language Proficiency test, being introduced in 2010. I won’t go into details here – my ex-classmate from Bristol has done a good job of outlining the changes a

She’ll not only be helping me learn the actual language, but will also be teaching me specific exam techniques that help one to pass JLPT.

I’m inspired by Nami (she also happens to be the first Japanese person I’ve met whose been as happy as I am to see Obama elected), and thus will be taking JLPT level 1 next July (as of next year the top two levels, 1 and 2 will be biannual). This excites me. She reminded me how much I love the Japanese language, and how much I love getting better at it. It’s vital I have a goal to work towards – this is perfect. It would be only too easy to just get by with what Japanese I’ve got. There’s nothing wrong with that as such, but it’s not what I want for me.

How stiff are your whites?

Living with *Twinkle* continues to be absolutely bloomin fantastic. We’re both getting home pretty late most weekday nights, me with teaching and *Twinkle* with our Amway business. But we get to cuddle up together under a tonne of the warmest wooly blankets at night, and that’s nice. The honeymoon period is far from over. I’ve started taking a more active role with our Amway business lately, and am finding it very rewarding. More than anything, it gives me the opportunity to meet a lot of like-minded (mostly young) people, all looking for an alternative to the usual diet of graduate jobs (not that there’s anything wrong with them if that’s what you want to do). It also tends to involve eating a lot of good food, or, as was the case last night, cake. We had a professional cake chef (there must be a proper name for them) come up from Wakayama and teach us how to make various kinds of real simple and quick cakes. Reminded me of home – mum’s home-made cakes are one thing I miss. Anyway anyway, I’d best tidy up and put the hottlebots on. It’s getting chilly, and this house has an amazing ability to amplify the outside temperature, Need to be up early too for the second jog of the week 🙂 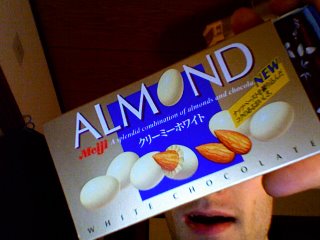 Try as I might, I can’t give up unhealthy food. Since I decided to not eat Japanese processed foods, especially those containing a lot of sugar, I have been bombarded with presents in the form of some of the most delicious unhealthy foods one could hope for. We’re talking delicious caramelised biscuits, chocolate-cream packed buns, apple strudels, chocolates, sweet pastry pies. They come from all directions: visitors to our home, students, colleagues returning from trips away.

Oh, and from the convenience store at lunchtime. Yes, I’ve become addicted to trotting across the road at 1.30pm and buying a pack of 105 yen chocolate-coated peanuts. …which they didn’t have any of today, which is why I bought this box of white-chocolate almonds instead. Eaten in about 5 minutes.

I use the excuse that I’m jogging three times a week and need the energy / deserve it. What a load of rubbish.

As of tomorrow I won’t do it anymore. I managed to give up buying alcohol. I can do the same with chocolate. Given the rate at which it flows into my life by itself anyway there’s really no need for it.