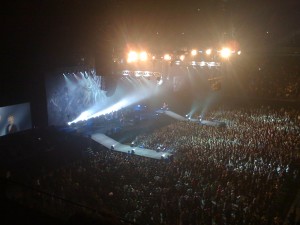 It’s only getting better

As of this week, I’m pretty much working seven days a week. It’s part of the self-imposed six month debt-repayment and moving-house program, which is due for completion on the 5th of March 2009. It’s step one of many steps in our Grand Masterplan, some goals of which include the paying off of all family debt and the establishment a perpetual charitable foundation that long outlives us.

Lofty goals perhaps, but it helps us to have them, as it does to have more concrete short-term goals too, like this six-month deal. Knowing that this routine is a temporary deal, a limited-time challenge, enables me to be excited about putting a lot into my full-time job and the various regular private English lessons I give.

Slowly managing to sort out things like insurance and savings plans. Tonight, a friend of ours who works for a large life insurance company came round to explain to me more about their policies, whilst at work I’m being enrolled in various pension / insurance schemes (which I am yet to fully understand). Yesterday, *Twinkle* and I decided which charities we’ll be supporting on a monthly basis (FoE Japan and Unicef). We’ve also started our 500 yen collection scheme – inspired by my boss Mr. D who saved 247,000 yen in one year without even trying (everytime you’re given a 500 yen (£2.87) coin put it in a special tin). Proper savings and investments as such will have to wait until the debts are repaid.

It’s a fun game to play, especially as we know that this is just phase one, and as the beautiful Stephanie Dosen sings, It’s Only Getting Better (not sure about the video!). I have this song as my alarm clock 🙂