Yet another way to easily save someone’s life today

A couple of days ago I blogged about signing up to become an organ donor, something I did last week. My conscience had been pricked by the results of research I’d carried out in preparation for a presentation in our Japanese language class.

The third option hadn’t fired my imagination, as it seemed somehow limited in scope (in fact, it was my ignorance of the life-saving potential of bone marrow transplants that led to my unfortunate disinterest). The presentation done, I was ready to forget about it.

Until fifteen minutes ago when I got an email from another student society at university:

Sheffield Marrow is a student run society at the University of Sheffield which is part of the national student-run outreach project of the Anthony Nolan Trust. We are a charitable organization and our three main objectives are to:
1. appoint people to the bone marrow register
2. fund-raise for the Anthony Nolan Trust
3. increase awareness of bone marrow transplants and the need for more donors

Intrigued, I paid a visit to the Anthony Nolan Trust web site. It was there, reading the accounts of those whose lives had been saved by donors, that I realised that I should absolutely be on this register.

Sure, by being an organ donor I can save lives …but that may not be for a while. I can (and will on Tuesday) give blood, and that’s groovy, but wow – here is yet another chance to give someone the most amazing gift they will ever receive – life. And what do I need to get on this register? A simple blood test. Easy as that.

Having read through their guidelines I find that unfortunately, I can’t add my name to their world-wide database until 2011, when I will have gone three years without an epileptic seizure. It’s not that epilepsy can be passed on through a bone marrow transplant, it’s the risk that I would have a seizure when coming round from the anaesthetic. So I’ve added it to my Google Calendar for 2011.

The thing that gets me about these three actions that I can take today to potentially save lives (register, give blood, register), is that I haven’t considered doing them before now. If those people who I could potentially save were right in front of me, about to be hit by a bus, I’m sure I would do my best to save them. But because they are somewhere else in space and time, I’ve never appreciated that by taking action today (signing a few forms and enduring a little discomfort) I could actually do exactly the same thing – and without even endangering my own life! To not do so out of laziness or disinterest feels, for me personally, pretty wrong. If I’d seen a child playing in the road and heard a bus approaching from around the corner and done nothing about it, I don’t think I would ever be able to justify having let them get run over because “I didn’t quite get around to picking them up”.

Ok, so that may be a bit of an extreme example, but at the end of the day, regardless of time and space, it’s about life and death. If there’s an easy way in which I can save someone’s life then I feel that it is my responsibility to do so.

Saving lives …and broadcasting to the world 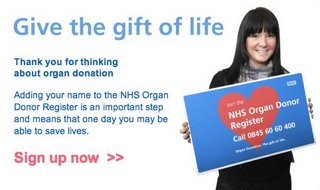