It’s worth complaining in Japan.

Last week, we bought some butter peanuts. They were very nice …apart from two of them which seemed to be kind of burnt in the middle.

I didn’t really think much of it, but *Twinkle* insisted that we send the remaining few peanuts back to the manufacturer.

Fast forward three days and I have completely forgotten about said peanuts. I return to an empty home and find a letter on the table (pictured). I pick it up and read it.

I am very confused. I scan the letter and see multiple references to peanuts, and then profuse apologies. Who on earth is sending us hand-written apologies, and why on earth are they talking about peanuts?

It was only once I’d eaten the whole (new) pack of deep-fried soya beans that were lying on the table next to a new pack of peanuts that it clicked – these were the replacements for the two faulty peanuts!

I turned the letter over, and there were two stamps attached with a paperclip – the refund of our postage. I re-read the letter in its entirety – it now made sense.

So, the lesson is, when you find yourself with a pair of dodgy nuts, it will probably pay to write a letter of complaint.

So there you go.

How to regain inches lost to shrinkage – no chemicals required 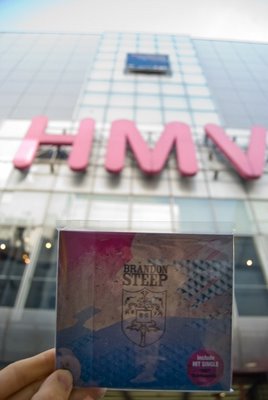 It’s so good to see your friends doing well.

The Kirk family have been good friends of mine for about 20 years. My trip to Islay (Scotland) to visit them 17 years ago was probably my first ever ‘big’ trip somewhere by myself. Later, they were kind enough to let me live with them for a few months. Jo remains one of my bestest friends – it’s been great to grow up ‘together’ (by letter / phone / email / visits to Hereford & Bristol).

It’s also been great to see the boys (Jo’s brothers) grow up. They’re not much younger than me, although when you’re a child a few years seems like decades.

Anyhow, a few years back Pedro, the eldest, started a band with his friend Luke. Joined by another three friends, they converted the garage into a studio, and then worked damn hard at getting good at what they did.

Things are really taking off now for Brandon Steep. Just last week I got a mail to let me know that they have a CD out in Japan, available from (Amazon, HMV and iTunes.

I was so excited buying this CD at HMV today. I’ve never bought a friend’s CD from a ‘proper’ shop before. It felt real good to be able to support them from such a distance (and get something good to listen to too).

(The chap behind the counter was full of praise for them, saying they were getting quite a following over here).

Congrats to Brandon Steep for your continuing rise, long may it continue!

Their website seems to be being re-worked at the moment, so for now www.myspace.com/brandonsteep is the place to go to check them out.

Oh, and check out the Herefordian field in this video 🙂

Lock and Lock changed my life

Tuppa was never our household’s strong point.when we lived in Sheffield, we had these nasty little tubs with lids that had a habit of cracking. Whilst we did invest in some slightly higher quality recepticles, they didn’t last long, getting fried in a microwave at a Japan Soc food party.

Things didn’t improve much last year in Itabashi-ku. Just after we moved in we bought some 100 yen tuppa. The lids stopped fitting whenever anything remotely warm was put in them – but we never thought to do anything about it.

Thus, until now, I have been hesitant to take radish and carrot salad, fearful that it would escape its temporary unlockable home and run riot in my computer’s CD slot. I did not enjoy taking rice dishes to my work place, knowing that I may well end up picking the grains out from the bottom of my rucksack.

That has all changed now. Last week I made the Executive Decision to procure an entire set of the snazzily titled Lock and Lock series of food storage devices.

Our new flock of Lock n’ Locks positively encourage the creation of packed lunches. They hold our food with confidence, not a hint of hesitation when asked if they would like to host the day’s edibles.

Thus, I would encourage others who suffer as we once did to seek out a local shop that stocks them, and invest in the best tuppas you might ever own.

They will change your life. maybe.