I had grand plans to document my arrival back in Japan both on this blog, and on a podcast. It’s not going to happen though – at least not yet.

I’ve found it a lot more difficult to settle in than I’d anticipated. One main stress factor has been money – or lack of money. Things are very tight, and with payday still at least 6 weeks away (once I have a job that is), it looks like things won’t be getting easier anytime soon. I find it difficult to relax when I have no income. We should have enough to survive on though, it’ll be OK.

The main goal of the next six months is to earn as much money as possible to pay off our debts and move house, without the relationship suffering too much. This means that my creative projects (such as a new podcast series and further development of Three Seeds Publishing) will have to be put on hold. It’s a shame, but I feel it’s a necessary sacrifice in order that we can keep these difficult times as short as possible.

Having said that, things on the job front are looking promising. I have been the beneficiary of a lot of help from two friends in particular – my ex-colleague Shari, and my good friend Tom. Without them I think I would be feeling a lot more desperate! Thank you both. I’m also grateful to my potential employers for their understanding of the situation.

At least the house is now in order. For a while there it was all cardboard boxes, difficult to find anything, difficult to relax, but I’ve got it sorted, everything in its place. I’ll take some photos soon.

I will also post about what *Twinkle* and I have been going through, perhaps at the weekend.

As fresh as a Greek daisy. One of the first ever flower-shots I took, back in 1996 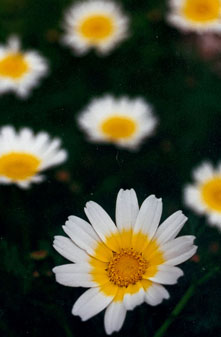 I’m glad I don’t usually have a car. Two parking tickets, a blow-out, and now today a section of the front bumper missing after someone reversed into me in the car park. I really am glad that on the whole, cars don’t excite me.

It’s been a pretty full-on few days. I was a photographer at a business seminar down south on Saturday – that was in-between the trouser-patch sewing, which incidentally when very well, although when I got home I realised that one of the patches was unintentionally shaped and positioned to look like a big testicle…

Having had the major Sheffield Graduate Award deadline on Friday, I’d spent much of the week getting my portfolio together. Thus, it was only on Sunday that I dared to finally re-open my to-do database.

Gulp. It was rather full.

One major to-do is my dissertation; I’ve got a deadline of Wednesday lunchtime to get the next section in, but it’s not going to happen. I felt very weary on Sunday, and it soon became apparent that I wasn’t going to do any work on it, as I was too busy hoovering, tidying up the noticeboard etc. Realising that this wasn’t a good situation to be in, I gave myself permission to procrastinate for the rest of the day – provided I procrastinated by doing stuff that was on my to-do list (but required less emotional input). That turned out to be a good decision, as I managed to deal with a whole bunch of emails that demanded responses, I wrote a journal article (1 down, 3 to go!), sorted out some wedding stuff, spoke to *Twinkle*, processed some outstanding RAW images, changed the wheel on the car again, and dealt with the huge bunch of paperwork that has been gathering on my table with the legs sawn off.

At the end of the day I felt quite happy with how I’d turned it around.

Today is the first day in the past week that I’ve not taken a potent cocktail consisting of a large dose of Vitamin B and Caffeine to keep me going. As a result of this, my body has finally had a chance to reassert itself, by sending me to sleep in the library at lunchtime. To be fair though, I was up at 6am again today for the usual (if temporary) morning routine: This involves picking up food from a community centre with a scary alarm, delivering it to the university shop, processing returns, picking up the catering trailer from up the hill, setting that up on campus, and fetching water. I love challenging myself to apply Lean Production tecniques to cut down the amount of time it takes me to get this done. I’ve now got it down from 2.5 hours to 90 minutes. I like looking out of the window when I’m back home at 8am, seeing the traffic queues and thinking, “wasn’t like that when I got up!”

With these temporary responsibilities I’ve ‘not had time’ for my daily exercise: the negative impact this loss has upon my energy levels is staggering.

Today has been semi-productive. I was in the library for about 8 hours, reading books when I wasn’t dozing off. But I have felt under considerable pressure.

Indeed, tonight it did all get to be a bit too much for me. Absolute exhaustion, and a desire to say ‘sod it all’. To ease things, I went and bought a big tub of ice cream, a bar of chocolate, and some stationary. I now feel somewhat better, and very fat.

More helpful than the consumption of 3 million calories though has been the recollection of a fundamental truth,

None of it does. Journals will still be published without my input, life will carry on without my emails, I will graduate (with a 2:1) even if I only get 40% on all my modules. Just pass, that’s enough.

As a treat, I gave myself an hour off my dissertation today and used it to look for jobs. That’s something else that has been on my to-do list. It wasn’t all that positive really, just tonnes of teaching jobs, but I’m not worried. I have a strong feeling that everything is going to work out for the best. I trust that when the time comes for me to act, I will know it.

I realised today that it’s actually going to be another 4 months before I see *Twinkle*. That brought me down a bit. I’ve been missing her so much recently, probably partly due to the fact that she would really benefit from my support at the moment. I miss being very much in touch with how she is feeling today, emotionally, and I miss her physical warmth.

Hmm, still, the way things are going these four months will fly by, and before you know it we’ll be back off to Japan. I am so looking forward to living with her again.

Well, it’s now 10pm, and time for me to go to sleep. Tomorrow will be another long day, bu a productive and enjoyable one too, and thus I look forward to it.