Over the next few months the number of running-related posts I’ll be writing is probably going to increase significantly. I appreciate that there probably aren’t many runners amongst The Daily Mumblers, so have decided to set up a new section of TGW dedicated to running.

www.TM2011.com (or tokyomarathon2011.com) is a bilingual site that will track my preparation for the Tokyo Marathon in February 2011. It’ll also be the main repository for the products of my new project, The Art of Running.

Being bilingual it’s also a study aid for me!

My thanks to www.lifeyou.tv for the logo, and @namyhei for giving the text a once-over.

The second run in my Art of Running series took place this morning in central Tokyo, and saw me joining the Sunday morning crowd for a section of the Imperial Palace circuit, before branching off towards Aoyama. Creating the eye of The 21km Imperial Duck required pausing the tracking software for a section of the run, then restarting when I reached the right spot. I also found that leaving home with only 60% battery on the iPhone 4 is not a good idea if you have two hours of GPS tracking and music planned. Finished it with 2% battery remaining!

It was really interesting doing the beak as I’ve never been to that part of Tokyo before, was stunned to fund such a big park that I’d never been into until now.

It was also useful to identify further issues I might encounter with the GPS tracking. Runkeeper has a tendency to crash in certain situations, and Google Earth just doesn’t have the resolution I need. I was also using Nike+ on my iPhone 3GS, and Runkeeper running with a second Runkeeper account in my bag (that captures the entire run, without pauses).

Here’s the route in Google Earth

The Art of Running: Meguro Elephant

In a bid to help me get through The Wall(s) encountered during long distance runs, I’ve decided to bring GPSart (otherwise known as Position Art) to the streets of Tokyo.

My first creation is the 18.43km Meguro Elephant. With an average speed of 10.28km/h, it’s one of the faster breeds, yet consumes a staggering low number of calories. 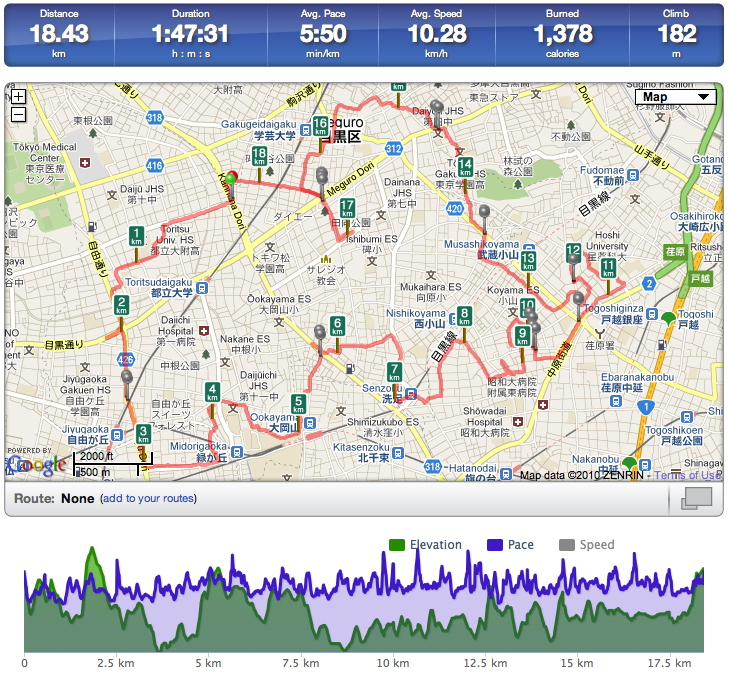 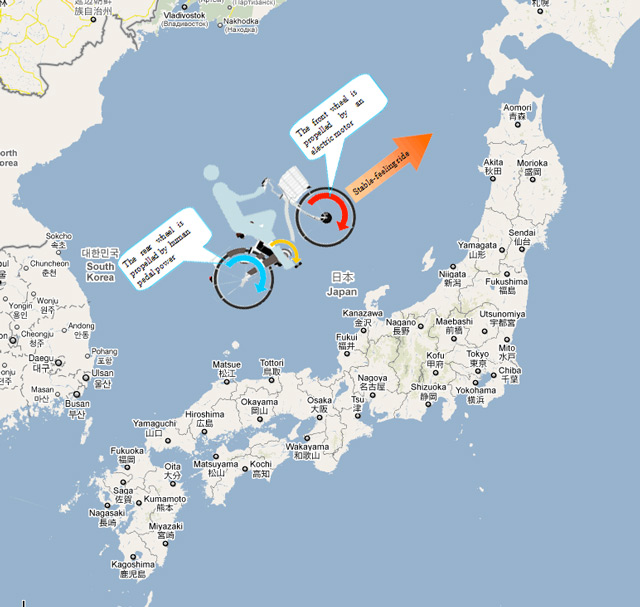 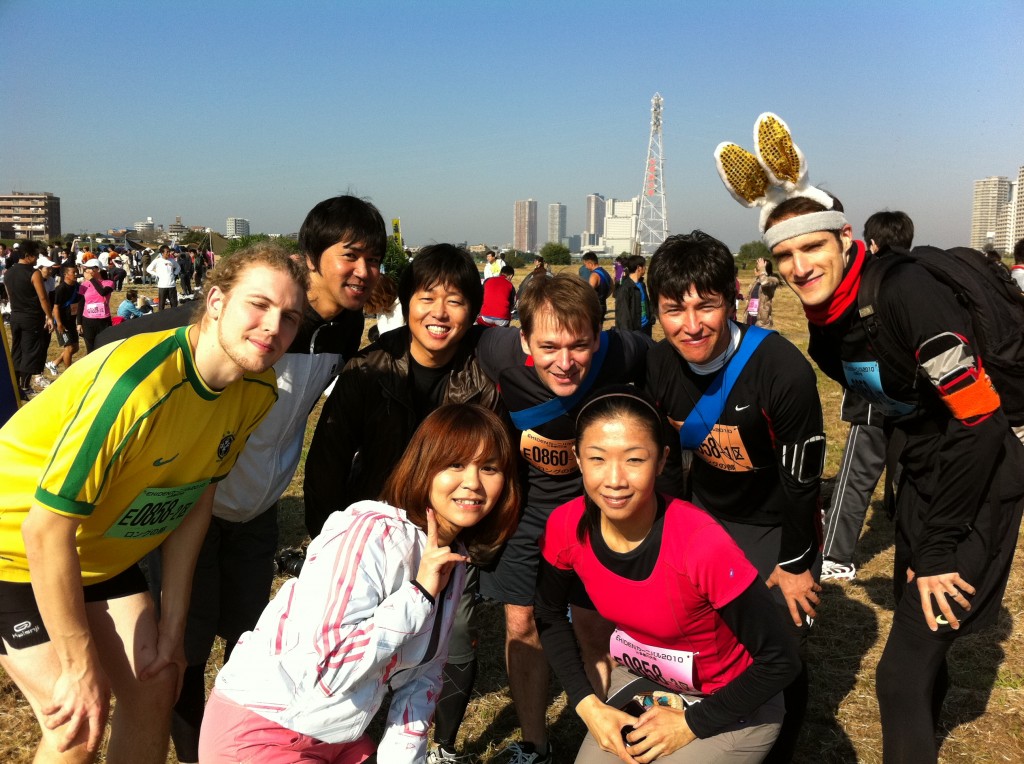 Yesterday I ran the final 5km leg of an Ekiden (relay race). Myself and My friends were just two teams amongst hundreds that ran the 23km course along the Tama river. The weather was perfect for running – blue skies, but not too hot.

Looking at my stats on runkeeper, I could see that my personal record for 5km was 21mins 51seconds, set back in May at the Arakawa Ekiden. My goal this time was to beat that – a tough challenge as I nearly died from exhaustion back then.

The first to run for the Quatro Kids was Tom – he had the tough job of running 10km on a very crowded track. Despite the traffic jam at the beginning he was back in 46 minutes – a fantastic start.

Next to run (5km) was Sheffield classmate Phil. He too is pretty damn fast, and was back in 21 minutes. Nami, friend and Japanese teacher (who organised the teams – thank you!) then took the baton for the 3km stretch, before handing it to me – I had the final 5km ahead of me.

Having scrapped the idea of doing a live video I focused on the running, taking off at an unsustainable speed of 1km/4mins. It was only when I’d run a full km and Runkeeper read me my stats that I realised my pace was too fast and that I’d probably collapse if I continued like that.

Having slowed down to an almost-comfortable 4mins15sec per km I started looking for a runner that I could use as a pace-keeper, and soon found one in a Japanese guy in his 40s. Not quite the young female runner I’d hoped for, but he was running at just the right speed; I focused on his shoes and imagined myself as being in his slipstream.

The final kilometer was tough. It seemed my legs hadn’t fully recovered from the running I’d done earlier in the week, and I desperately wanted to slow right down. But regular updates from Runkeeper I knew I’d miss my target time if I did that, so pushed on.

Entering the final 500m, the pain was taken away by the cheering crowds. Crossing the line I was a happy bunny… and looked down to see what time i’d made it in: 21min 55sec – 4 seconds slower than back in May! That made me laugh…

Still, I’ve had my best week running so far this week, covering almost running 50km. Also, 30km of that saw me carrying quite a bit of weight, in the form of 2 x 0.5kg weights strapped to my wrists (need to build up my arm muscles for carrying the camera) and a rucksack containing an iPad and an assortment of clothes.

There’s still a long way to go until I’m ready for the marathon though.

Running is continuing to make me feel a lot more energized generally, which is a good thing as I have so much on my plate at present.

Been talking with *Twinkle* more about long term plans and a project that we can work on together. A decision has been made there… watch this space. 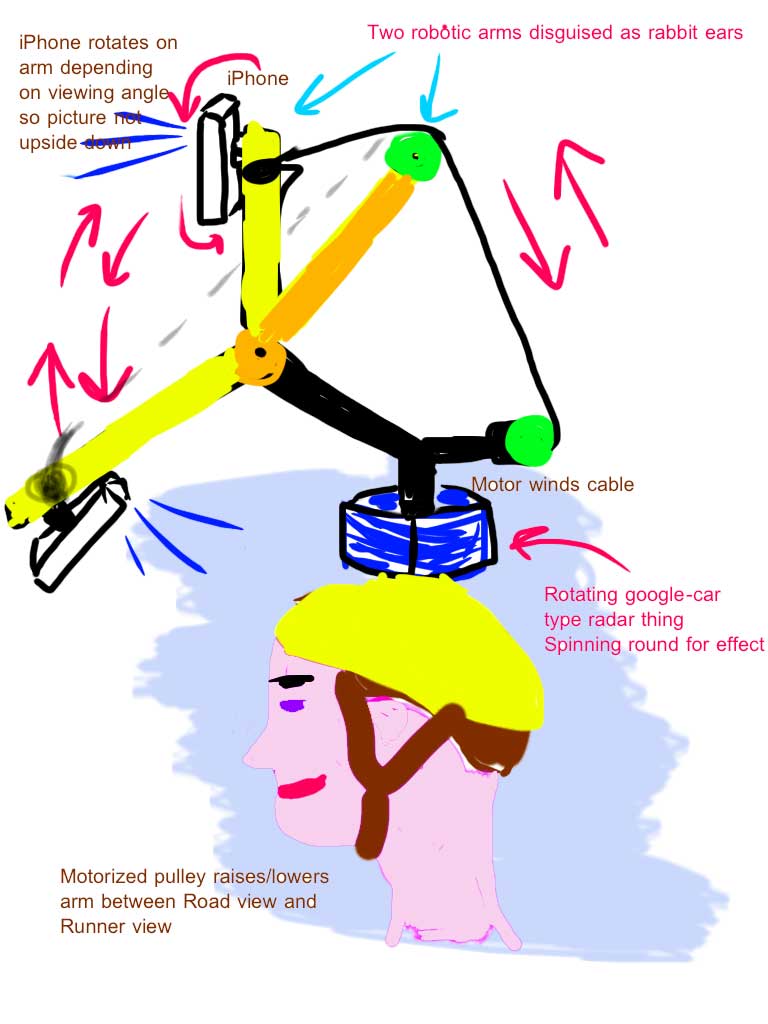 Now that my place in next year’s Tokyo Marathon has been confirmed, it’s time to start planning the specialist headgear I shall use to ensure that the many people who haven’t been selected to run are able to do so virtually, courtesy of a number of cameras and sensors that I shall carry.

I created this mockup on the iPad yesterday, and sent it to robot-specialist Lem Fugitt for his expert opinion.

Interesting concept, though technically it has some significant challenges. We would have to re-enforce your neck to begin with – maybe replace it with a steel post.

Hmm, i think that might be going a bit too far this time.

Nevermind, plan B is now on the drawing board. Watch this space.

As I posted on my microblog yesterday, I’m on of the lucky 1-in-9.2 applicants that were selected by lottery to run the Tokyo Marathon 2011. Over 294,000 people applied for the full 42.5km race, with only 32,000 able to run. Unfortunately, unlike last year, the majority of my friends were not selected – I only know 3 people who got in. This is quite a disappointment, as Tom and I have run together from the start of all this in 2008. Fingers crossed though that a lot of people forget / choose not to pay the 12,000 yen (£92 $147) entry fee, thus increasing the chances of getting in through the second lottery next month.

Receiving that email had quite an effect upon me – I started shaking, feeling both extreme excitement and happiness. It gives me a clear goal to aim for, and ensures that I keep on running. I’ve now decided to take the training more seriously this year, partly because I’m really enjoying my running, and partly because I want to be able to focus more on whatever it is I end up doing during the 2011 marathon (that is, apart from run). …I’d like to do something bigger and better than last year.