It was the night following my disastrous Japanese language exam, and I was in need of some relaxation.

Part of my prescribed therapy was a wee hair cut. Just a trim, you know, to stop me looking like a legless ostrich doing a headstand (if you can pictue that). It was all going so well. I have hair-cutting implements galore – no less than four electronic shavers and four pairs of scissors, each with their own speciality. For example, the speicality of one pair of scissors is not cutting what they are supposed to, whilst the speciality of one of the shavers is going from deathly quiet to sounding like a machine gun in a split second and for no apparent reason.

Anyhow, I digress, the fact is, the hair-cutting session which was taking place on a special hair-cutting bed-sheet on my futon, was going well. As *Cough* was daintily snipping away here and there, I thought I’d join in and help, by shaving my sideburns a little (is that what they’re called? I always wondered why, makes no sense…). So, i set the length thing on the shaver, and trimmed the left-hand side. Jolly good, no problem. Then I start to laugh, as I’m also watching the rather silly but quite funny Bruce Almighty. In this brief momentary lapse of concentration I apply the shaver to the right side of my head, trim the sideburn, but then forget to stop when I reach the ear.

The result is a rather unfortunate bald patch that extends about 1cm above my ear, as demonstrated here. 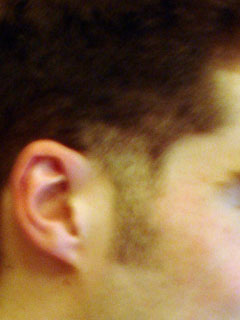 The proceedings ground to a dramatic halt. You see, it was my intention to keep my long hair for the whole winter, and now, here I was, with a bald patch which demanded that drastic action be taken to make it not look like I had tried to cut my own hair and absent-mindedly shaved my ear off. The following morning I begged a local barber to save me. He did, although the results were somewhat drastic – I have lost about 10 years!

Here I am a couple of weeks ago (ojiisan Joseph): 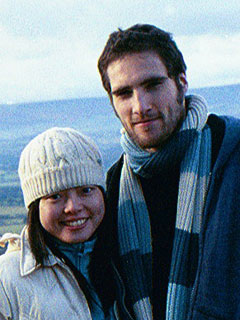 And here I am yesterday after the operation: 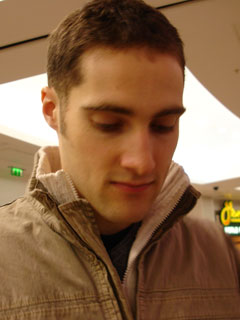 I tell you what, my ears aren’t half cold. Thus, I tend to keep this hat on, as demonstrated in this shot taken from my Dad’s car’s surveillance camera. Mum had it fitted to the dashboard to make sure he doesn’t pick his nose whilst driving. Probably. 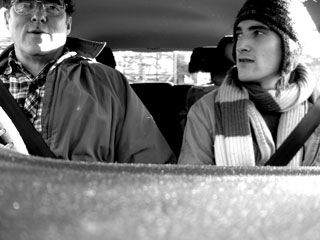 This, incidentally, and in case you were wondering, does not effect his ability to grow leeks. 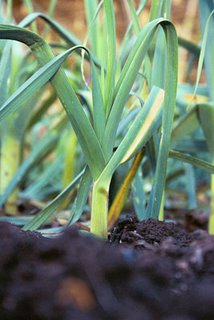 So, yes, all it all it was an interesting evening, and I certainly had forgotten about my disasterous exam by the end of it. Must bear that in mind should I ever slip on a banana again.