Today, *Cough* went to London, and I came back to the Welsh Garden Project. In a style that is typical for us, we had arranged it so that our trains departed but a few minutes apart from Sheffield Station, and from the same platform. The latter took a bit of organising. You know, buying some welding equipment and sneaking onto the main line at 2am to fix the points so that all trains had to use the same line. Still, it was worth it, just to sneak an extra few seconds together in a drowsy state of crikey what-are-we-doing-up-at-this-ridiculously-early-hour-of-8.30am non-communicative zombie-mode romantic bliss.

Anyway, one of *Cough*’s missions in the Big Smoke today was to put some posters up at SOAS (School of Oriental and African Studies) promoting the Amazing forthcoming Japan Day on February 12th at Sheffield Uni. There she was, covered in blu-tack and sellotape, when she spied someone out of the corner of her eye that she had seen before – not in the flesh, but in the depths of my urksome hard drive, in .jpeg format. It was my teacher – N.Sensei as she is known in the world of tales of renegade paternoster riding. She was there for the Japanese Speech Contest that I entered last year (but didn’t get through to the final of due to accidentally thinking that the first round would be conducted in Russian).

“Ah, hello N. Sensei” said *cough* (in Japanese). Knowing that they had not met in the flesh before, she thought she’d better explain how it was that she knew her, and her intimate connection with the Tame that goes Wild in N. Sensei’s classes.

BUT! Before she was able to utter another word, N. Sensei replied (in Japanese), “Ah, you must be Cough! (actually using the English word ‘cough’, rather than my girlfriend’s secret real name).

*Cough* was surprised to say the least, as the only place where she was referred to by her codename ‘cough’ was right here, on Tame Goes Wild …but before she could probe N.Sensei the conversation was brought to an abrupt end when a team of cheerleaders came racing down the corridoor wearing nothing but underwear, jeans, two cardigans, big duffell coats and wooly hats. And gloves.

This can only mean one thing – N.Sensei has defied the high security measures in place around TGW, and TDM in particular, to stop people who have actually met me in the flesh from gaining access to my most inner thoughts. You know, things like the lack of any security whatsoever.

Then I start to think how all that effort I have put in at university to appear to be a responsible mature adult student who rises above all others in terms of wisdom, tact and sensitivity towards my fellow human beings, has gone to waste. And then I remember an entry only two days ago in which I once again spoke about my preferred breast size. I mean on other poeple, not me, despite the rumours and the collection of women’s underwear that i have in the bottom of my wardrobe.

Ah! I have been living under an illusion!

In other news, that is actually related to the above but in a way that only one person will understand, I received a postcard from Bob the Donkey today (Bob having been sent to Africa with the funds that I would have otherwise spent on idle trash for friends and family, you know, the kind of stuff Japan Soc gives away as prizes at major events). In it he writes that he is enjoying his new home in the sun, much nicer than Croydon where he was brought up apparently. He says though, that the family that he is staying with keep on tying big barrels of water and food to his back, and expecting him to carry it home from the market. They don’t seem to appreciate that he’s on holiday. 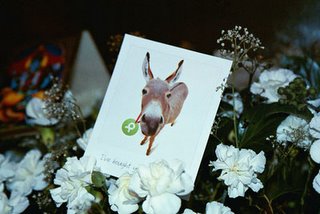