Imagine yourself on a fine winter’s day, mist rising from the valley below, a pale sun struggling to make its warmth felt upon your face. That morning, You had donned your hiking boots, put your wooliest wooly hat on your head and fumbled around in the wardrobe to find your favourite walking stick. It was time for a hearty stroll in the countryside.

Several hours and 2 Kendal Mint Cakes later, you are just climbing over a stile into a field which rather oddly, considering the fact that it’s mid-winter, had a herd of cows in. They look friendly enough; there’s no sign of testorone-driven bulls that might want to impale you upon one of their horns that they don’t realise they no longer possess due to the fact that the farmer sawed them off when they were wee baby bullocks.

Ah, this is the life! You take a deep breath. Feel that fresh air filling your lungs. Hear those wee tweety birds in the sky above! See the grazing african elephants and wonder what they are doing up here in the Lake District.

BUT! (“tokoro ga!”) you have not spotted the banana skin which lies on the path directly ahead! Nor have you seen the seemingly harmless dried up cow-pat that is well beyong the fly-fest heydays of old.

OR SO YOU THOUGHT!

You take that one final step, a fate that equates to the sheer monstrosity of the Blue Screen of Death, and whoooooosh………! Your right heal has landed on the banana skin, which, due to its fairtrade origins is extra slippery, sending your legs flying forwards and up into the air that like some Chinese gymnast you seemingly effortlessly perform a complete somersault AND 180 degree twist in mid-air. It is only now, when you are held for a moment in weightless suspension between the up and the down that your eyes open from the blink that they had been performing when your foot first made contact with the banana skin – and they see, directly below them, the cow pat. Your stomach turns to lead, and your mouth opens – a deep slowed-down version of you saying “Nooooooooooooooooooooooooooo!!!!!” is heard for a split second, before your nose breaks the stale crust of the cow-pat, to reveal a Jolly Green Giant type frozen-as-soon-as-it’s-picked freshness of a loose burger below.

Now substitute the putting on of the waterproof hiking boots and wooly hat, and the finding of the walking stick, for my preperation for these exams. I prepared to be the viction of a rainshower by studying for my essay-type subjects, and studying kanji. However, I did not ensure that I had my GPS linked Banana Skin Detection Monitor with me – i.e. I had completely neglected to look over what we had studied in A Sensei’s class, and I had no time in the end to get any essay-writing practice in before the exam. Poor preperation Joseph.

Thus, the turning over of the exam paper saw my foot fall squarely upon the banana. Seconds later I was in the S***. Below the crust of niceness that is Japanese lies a murkey quagmire of suffocating manure.

I swear, I will NEVER let myself get in that ridiculous situation again, whereby I don’t understand a blooming thing. It was a real shocker, as i am used to being confident in that (Japanese langauge exam) situation, so to find myself sitting there for 10 minutes not writing a single thing (just thinking, “I can’t do this”) was, well, is, a real wake-up call.

Well, no looking back, and no regrets. What’s done is done. I’ve already made a start on next semester’s modules – read a 1/4 of a core text on the train today, oh, and have decided to reimplement a study regime dreamt up last year (and successfully executed for a few weeks until I got lazy), that being getting up at 8am, in the library for 9am and staying there until it shuts, with the odd hour off for a lecture. I HAVE to get back on track.

Still, at least I can put my exam-kit away for another few months. 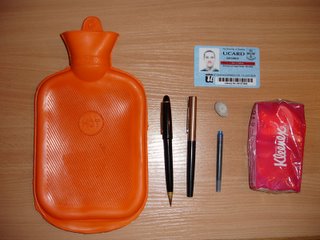