Ok, I’m getting thoroughly sick and tired of study now. Another whole day of head buried in lecture notes. Arrgggghh.

In a bid to cling on to what little sanity I have, I have changed the scenery around my desk. Not that there was anything wrong with the old scenery, I just thought a change would be good. So yes, my desk is now about 10 miles from where it was this morning. It is now on English soil (or floorboards to be precise), as opposed to Welsh.

Mother and father have been providing amusement with tails of the next-door neighbour attempting to trap the family of grey squirrels that have been raiding the local bird feeders. He’s had mixed success, having accidentally caught a hedgehog (I didn’t ask what the hedgehog was doing up a tree), and having found the last of the three apprehended bushy-tailed thieves hanging upside down with a back leg in the trap, still breathing. Cute they may be, but at the end of the day, they remind me of American Culture (pardon the antonym) in a Japanese context, in that they are a) American in origin and b) have decimated our native little red squirrels.

Mum, over lunch, displayed the most shocking sign of aging to date. Just before the meal, she showed me her latest watercolour masterpiece (she really is a very good artist) – a young hare standing up, ears alert for any sound of the Big Brother theme tune, a classic sign that it’s time to run for cover. Anyway, having had a little conversation about the picture, and after I’d told her how good I thought it was, she put it away in her art folder, and served up the meal.

We shoot forward in time in the manner of someone in a twirly-whirly time machine – it’s now four minutes later. Conversation between mouthfulls of (what I have now discovered to be fart-inducing) bean curry, has turned to her art class again.

Suddenly, she breaks off, stands up, and goes into the other room, returning with her art folder.

“Oh, this is my latest piece” she says, pulling out a watercolour of a hare standing up with erect ears scanning the field for any sound of a Big Brother theme tune.

Well, we all do it sometimes I suppose.

The rest of the meal is packed with tales from dad of similar short-term-memory-loss situations he’s been in recently. One involved him in a sauna attempting to get everyone involved in conversation with a French man who lacked any English. This is quite typical of my father (breaking the barriers), an admirable trait, but also one that makes for rather time-consuming shopping trips as he has to attempt to make everyone in WHSmiths at least smile with some friendly / humorous remark. He usually has to be dragged away from the checkout, for fear of not getting back to the car before the meter runs out. Anyhow, back to the sauna. So, Dad got everyone to introduce themselves and say what they did for a living – and then attempted to translate this for the French guy. Unfortunately, much to the confusion of the other men and women present, when he got to the point of introducing Terry the Barber, his memory suffered a brief lapse, and he started to explain that Terry the Barber was a professional jockey. In bad French, with accompanying horse-riding gestures.

You can just picture it, everyone being so British and sitting there in embarrassed silence whilst he started whinnying like Black Beauty. 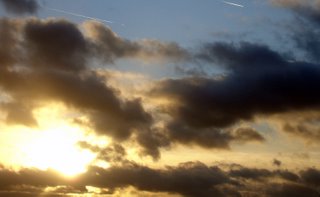 Well, I’d best get on. I’m heading back up to Sheffield tomorrow, just for a week to do exams, then back down here to prepare for next semester.