Hello hello. Hmm so much to say, it’s almost enough to warrant a podcast. Sadly I can’t afford the bandwidth, so we’ll have to make do with HTML.

Well, what a week or two it’s been. Absolutely mad. Just been soooo busy. This has primarily been due to last Sunday’s Japan Day, the biggest event yet that Sheffield Uni’s Japan Society has put on. And the biggest event that it will ever put on if it has any sense. It all started when the Japanese Cultural Secretary visited last year. He took Will and I out for Sushi, and encouraged us to put on a Japanese extravaganza – promising the support of the embassy. Come last Sunday, we found that this support manifested itself in the form of a few bits of plastic sushi and a photo of a bullet train.

I would tell you about the day in Mumble style, but I’m a wee bit pushed for time, so instead here’s my description PR stylee, what I wrote for someone else:

In the summer of 2005, the Japanese Cultural Secretary from the Embassy of Japan in the UK, Mr. Otsuka, made a trip to Sheffield to meet the committee behind Sheffield University’s Japan Society. As a result of this, in October 2005 a team was formed, consisting of Japanese exchange students and resident members of the Japan Society. Their goal: to create an event through which elements of Japanese culture could be brought to the UK, and so further understanding between the two nations. Thus Japan Day 2006 – ‘Breaking the Barriers’ – was born.

On February 12th hundreds of people flocked through the doors of the University’s Octagon Centre to participate in the cultural festival. Those attending had come from far and wide; in addition to staff, students and local residents, members of Japan-related organisations from York, Essex, Brighton and Northern Ireland made the trip to join in the fun. There was even one man present who had come all the way from Australia – just for Japan Day!

The event kicked off (literally!) with a great demonstration by a university-based Karate club, which was then followed by a dramatic set by the internationally-recognised Japanese percussionist Joji Hirota and his Taiko troupe. The sheer power of the drums was quite staggering, whilst the energy and dexterity of the drummers themselves ensured that it was a performance that would not be forgotten. The energy whipped up by Joji’s drumming was then seized upon by the Japan Day Committee themselves, in a fantastic fast-paced rendition of the Soran-Bushi dance, set to the music of a traditional fishing-song from Northern Japan. A break for lunch (in the form of a selection of Japanese foods including Sushi and Curry Rice) was followed by a talk-show with the Japanese Entrepreneur Ayumu Takahashi, author of numerous bestselling books and founder of Sanctuary Publishing, who had flown over from Okinawa in order to participate in Japan Day. During the talk-show he revealed how he had achieved his remarkable success in life, primarily through ‘breaking the barriers’ of constrictive social norms.

Following his talk, people were able to sample aspects of Japanese culture such as Tea Ceremony, Origami, ‘GO’ and Anime, and could also try on a traditional Japanese kimono. The day was then brought to a close by a very energetic set by AXIA, a band made up of Sheffield University Students past and present, performing Japanese songs.

Overall, Japan Day 2006, an event made possible by the kind support of Sheffield University and local businesses, was an outstanding success, with all profits being donated to two charities located in Japan and Sheffield. 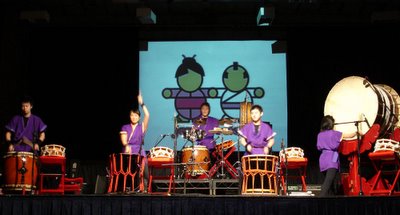 Hmm, yes. I guess it really was a success, especially in turns of turnout. The place was packed, with a load of people having to sit on the floor as all seats were taken, and nothing went wrong in a truly spectacular manner. The highlight for me was Joji Hirota, the Taiko drummer and his band. Bloomin’ marvelous. I really love Taiko, and have done ever since my first taste of it in a secondary school gym in the middle of nowhere in Eastern Hokkaido in the winter of 2000. I think the most stunning performance I’ve witnessed was that by Kodo, the professional squad from Japan, who were playing at the Royal Festival Hall on London’s South Bank. The did things with drums you’d never have thought possible. Re. Joji’s group though, it was Kumiko, a multi-platinum award-winning drummer whose banging technique I was most impressed with. I don’t think I’ve ever seen anyone move so fast – and such an incredible sense of rhythm. Huge muscles too. And a rather crazed look on her face. Quite scary actually. 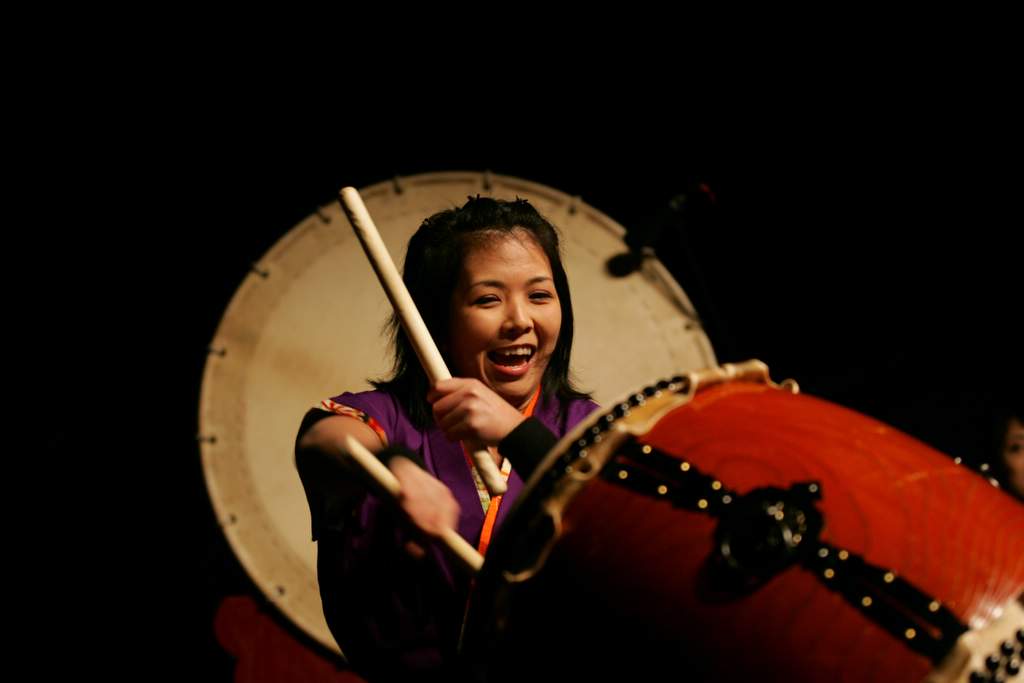 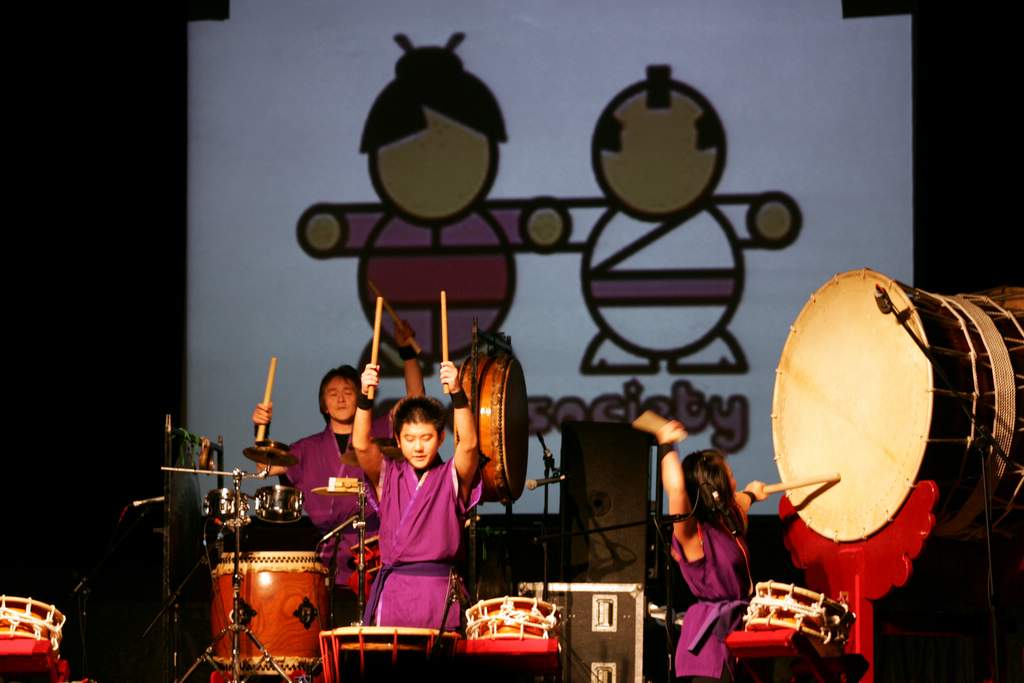 The part that brought the biggest smile to my face was when the Japan Day Committee performed Soran-bushi, a dance, to a tune that used to be sung by fishermen in Northern Japan when offloading their catch to keep their eyes open and spirits up. I was so damn impressed by my friends, truly a magnificent performance, which I guess is to be expected considering the endless hours of practice they’d put in. (Note that I am absent from the photo. I thought it best to save the audience the agony of watching a seamless performance being ruined by some monkey in the back row with his timing all screwed up – if you have seen the video of last year’s Japan Soc production of Romeo and Juliet you will know what I mean).

In fact, I took very little part in preparing for Japan Day. This was a deliberate, selfish ploy on my part to avoid the bucket-loads of stress that I would have been drenched in along the way had I chosen to play an active part. I find it so hard to leave things to others – and with Japan Day being such a big event, with a budget of thousands and a ridiculously small timeframe within which to prepare, I knew that were I to get involved it would mean major stress, with a likelihood of a return of my seizures – something I want to avoid at all costs. Well, it paid off, and I managed to remain detached from the whole preparation process, other than a day spent making sushi, which was really quite relaxing, thanks mainly to the fact that we had a fantastic team of rollers behind us and plenty of experience of sushi-mass production. In fact, the stress-management strategy worked so well that I felt able to safely reduce my dosage of Epilim to 800mg daily – a great achievement.

Anyway anyway, I’m glad it’s all out of the way now, so I can concentrate on surviving the last 10 weeks of my 2nd year at uni.

Took part in a departmental open day today. I enjoy doing the ‘meet a real live student” bit, gives me an opportunity to waffle in front of a crowd about something I love. I hope I and my two course-mates didn’t put them all off by stressing just how hard the course is. I don’t think we mentioned 70% when talking about the high drop-out rate. More failures/ drop-outs this past week. Of course the best bit was the free Kit-Kats.

It’s been a while since I was in a ‘proper’ relationship on Valentine’s Day. I have tended to associate it with the feelings I had a few years back when standing alone at the top of the Eiffel Tower in the City of Love, on that very special day. Alone, that is, except for all for the snogging couples around me, B*tsrads.

This year though it was all very different. Preparations had been made, with *cough* booked to turn up on my doorstep at 7pm for the show that was to begin at 7.30pm in Sheffield’s recently refurbished City Hall Theatre. Gosh, she did look rather delicious. I’d never seen her in a dress before (she tends to be in her pyjamas most of the time…). Mmmm yummy scrumptious. Even more yummy scrumptious though was the soft-choco that she’d made for me from 100% organic ingredients, including a whole huge bar of lush G&B Maya Gold. I’ve never been the recipient of what I understand is this traditional gift, and was most touched.

The happy couple then left the student flats and tripped merrily down the road to the Theatre, where we joined about 1000 other lovies for what was billed to be a fandabulous musical extravaganza: The Magic of the Musicals, a non-stop rollercoaster ride through all the greatest classics, from Grease to Evita, Mary Poppins to Les Miserable.

The first sign that maybe this had been a mistake was the fact that there was not a single person in sight who was born post-Jurassic age. Nevermind, we thought, it’s not the audience that matters, it’s the show.

Unfortunately, things got off to a bad start, when the MC, Robert Meadmore, walked on. Although I’d never heard of him, he is apparently quite famous. The reason I now know this is that he told us, several times during the show, that he released his first album late last year, and it has been at No.2 in the classical charts ever since. He then waited for applause – not the best way to ingratiate oneself towards an audience. I think his existence merits the resurrection of the word ‘twat’.

Thankfully the following two hours did not consist purely of his crooning. No, we were saved by Marti Webb (who I had actually heard of), who really did impress me. Shame about the burglar alarm going off in the middle of her beautiful rendition of ‘Don’t Cry for me Argentina’. Comedy was added by Wayne Sleep, a little titch of a man who had an obsession with spinning around in circles at the speed of light whilst his head stayed perfectly still. Quite how he managed it I don’t know. It was funny though, almost at any available opportunity he’d come trotting on and start spinning, as if it was his party trick. Damn good tap-dancer too though, and singer.

Further comedy was added by some completely insane woman in row S, who kept on screeching at inopportune minutes. Quite why she wasn’t chucked out I don’t know.

I must admit, I did enjoy it in the end, as did *cough*, although it wasn’t quite what we were expecting. And of course, I was with my cutey, who continued to be my cutey when we got home, and had an early night. Tee hee RAAAAAAAAAAAAAAAAAAAAAAaa Woof woof 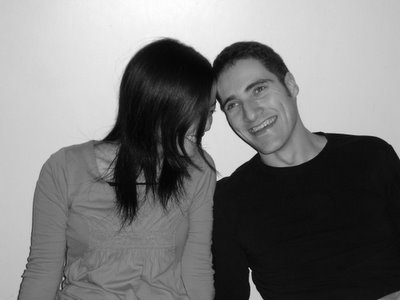