…was thankfully not how you could describe my arse after a trip to Ice Sheffield with Japan Soc yesterday. I didn’t fall over ONCE! Mind you, I wasn’t actually on the ice for very long – I’ve decided that I don’t like ice skating. I mean, all you can do is go round and round in circles, whilst trying to not get knocked over by annoying brats who, by the age of about 7 months, seem to have mastered all the tecniques required for speed skating and cutting people up in order to make them fall over. I try to console myself by thinking that outside of the rink they probably wear Burberry. 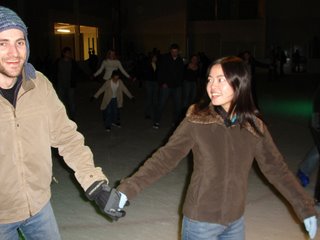 Incidentally, the reason why half of me is missing in the above photo is that the photorapher incorrectly assumed that I was skating at a pace that would not see the coming of the next ice-age before I’d managed to complete one circuit.

Other news: Having scratched the screen of my beautiful new iPod, I decided to invest in a screen protector. Yes, i KNOW I shouldn’t have removed the original protector, it was very silly of me. Anyway, so I buy another on eBay thinking it would come from the UK and arrive next day, then realise it’s actually going to come from Hong Kong and will set me back a fortune in postage. Ok, so it arrives this morning, and I try to apply the microfilm to the iPod. I just about manage it, with a couple of unfortunate wrinkles, then bother to read what it says on that plastic tab attached to the microfilm:

I try to remove it post-application. This results in it kind of tearing the newly-applied film, which then has to consigned to the dustbin…

Oh well, Glenn Hook (Conteporary Japanese Culture lecturer) will just have to be content with having his nose scratched a bit more. 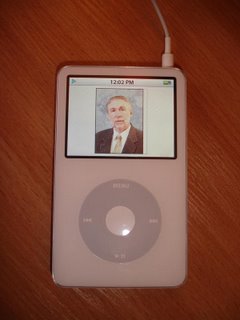 So, it’s the holidays! Hooray! 3 weeks of, er, essays and revision! Hurray! I’m very happy with my performance so far this semester (as is *cough* fnar fnar). Two presentations that went well (one of which was a 69, brought down by my ability to shut up after 15 mins, and, rather bizarrely, a reference to badgers in Japan). Weekly assessed homework has been very rewarding, and I’ve got top marks throughout. Yesterday’s presentation in Japanese was fun too, if somewhat nerve-wracking.

The national strike by University lecturers doesn’t look like it will affect us – unlike in some parts of the country. A close friend of mine in Bristol has found herself in a situation where none of her work is being assessed, and it looks like exams won’t be set this year either, meaning that her and her coursemates cannot progress to level 3. Those in their final year can’t graduate either.

So yes, all in all, uni is ggggggrrreeeaaaaaaat! in a Tony the Tiger type way.

*Cough* and I are off to Liverpool on Sunday. Never been there before. We’ll be checking into what looks like a rather nice four-start hotel in the city centre, exploring and what not. From there it’s bye bye for a little while as she heads off to Italy to sample some delicious food, amazing shops and astonishing architecture, and I go to Wales, where it will probably be raining.

A week in my retreat penning an article on Wwoofing in Japan for a pretend magazine in Australia will be followed by two weeks back up here studying. Speaking of magazine articles, watch out for the July issue of Organic Life which will feature a mini-article and photos of me talking about Wwoofing in Japan and so forth. No doubt I shall draw your attention to it again nearer the time. Knowing magazines these days, if it’s the July 2006 issue then it wil probably be published 2 years ago.

Anyway my darlings, isn’t life wonderful? Remember to be thankful for your good health (if you have it), and be grateful that you are not the girl who I saw yesterday taking a tremendous fall yesterday on the ice, which resulted in a rather ugly broken wrist.

Much love and happiness this springtime