As we all know, in the UK we have a lot of minority groups who are shunned by both society and state.

One such group are those people who like to hop on one foot, just for the sheer pleasure of it. Sadly, they suffer a lot of hostility from mainstream society, a fact that has its roots in the 1960s when the Shoe Manufacturers Guild started a vocal campaign against this practice as they said that it harmed their businesses. Hoppers would only have to buy shoes once a year, as opposed to the average 6 months, as when one shoe wore out they’d simply switch to the other foot (this also helped to prevent the withering away of either leg muscle through under-use.

Thankfully, the 21st century has brought new rights to the minority group of Hoppers, with all city councils now oblidged to provide designated hopping areas, as seen here in Liverpool. 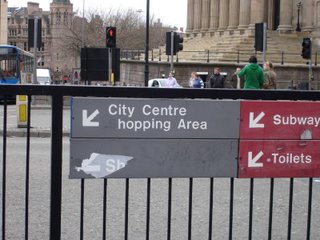