I think I should give up all ideas of a Japan-related career and become a professional Nominator.

In the summer, I nominated Japan Society for Best National Society – we won.

As told below, a few days ago saw my friend Will Christophers receive one of only 5 Union Centenary Acheivement Awards – following my nominating him.

Tonight, saw the Golden Gnome Awards Ceremony for which I had submitted 9 nominations on behalf of Japan Society, covering everything from best website (that one was a joke by the way) to Most Successful Student Group.

The competition was fierce. Almost 200 societies were in the running for a mere 18 prestigeous, highly-sought-after Golden Gnomes, one of which is pictured here. 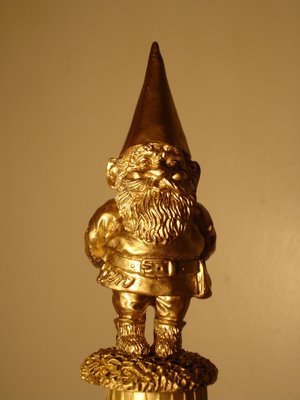 Out of the nine categories I nominated the Society for, we made it onto the shortlist of seven – an unrivalled performance.

The first Golden Gnome we picked up was for Best Event Organised by a National Society – that was for Japan Day, which has rather bizarrely left us with over 1000 pounds to give to charidy, mate. The next was in recognition of Will’s great contribution to the Society – the second such award he has received this week! (As his dad said, “I’ll have to get you a filing cabinet for all these certificates…”)

Ooooh, and then things started hotting up. It was time for the Best National Society Award, the title we’d won last year. We were up against MASSOC (Malaysian and Singaporean Society), and some bunch from Scandanavia. Finland or Sweden, maybe Norway – I forget which. The representative on stage with me was blonde in any case, and probably drove a Volvo.

Drum roll… I was sweating under the stage lights…

and the winner is….

I must admit, I was pretty gutted. Thinking back to everything we’d done over the previous year… Still, we could be content with the recognition for Japan Day, and our stack of runner-up certificates.

Oh, but didn’t I enter us in one more category? What was it… ah, yes, the best one of all of course – Most Successful Student Group.

We really were up against it with this one. Our rivals included the fantastic RAG, a fundraising group that donates tens of thousands to charity every year. We couldn’t possible win.

Suddenly, the room fell silent. The MC, sweat dripping from his brow in nervous tension, slowly opened the Golden Envelope. Light flooded forth from within its holy folds, time came to a standstill, and someone dropped a bag of Maltesers on the floor.

AND THE WINNER IS….

Wow, Most Successful Student Group! Excellent stuff, I can retire safe in the knowledge that during my time as a part of the Society we reached the pinnacle of student-group-amazingness. Don’t get me wrong, I’m not claiming all the glory for myself, it was the huge team behind the committee that brought us this success.

Having said that, and getting back to what I said at the beginning of this post, it does suggest to me that I should try marketing myself as a professional nominator. I mean, 8 awards in the space of 12 months – not bad eh?

So, I’m open to offers. Let me know what you’d like to be nominated for, tell me how much you’re prepared to pay and I’ll consider taking you on. 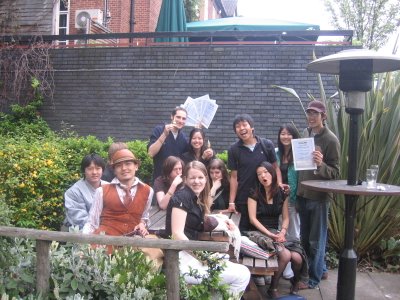