Well well well. What a nice couple of days I’ve had. haven’t done anything in the way of study since, er, three days ago now. HA! I laugh in the face of exams (and no doubt regret it later).

Anyway, I’m all set to start revising later today. BUT, first, I must tell you what I’ve been up to…

Oh, but before that, I must just instruct you to go and have a look at an interview with “Mr Lordi”, the winner of this year’s Eurovision Song Contest.

I was curious as to whether the UK had come up with a song that was, as usual, guaranteed to ensure that we lost by a margin of at least 267. Reading the review on the Eurovision Website, and then checking the results table, I was reassured that we had not broken away from our British tradition of making complete fools of ourselves, and had indeed lost by a margin of 267.

Another contestant not short of confidence is Daz Sampson of the United Kingdom who describes himself as ‘the people’s champion’. But there’s no sign of him at the start of the song, which is being sung by five girls in cute school uniform, sitting at desks in a classroom. It’s only after the chorus that Daz appears from behind a blackboard, dressed in a bright yellow jacket and rapping about the gulf between teachers and teenagers. A very catchy tune!

A very catchy tune maybe, perhaps of that variety that is so terrible that it sticks in your head, going round and round and drives you crazy. A bit like Cliff Richard’s “Christmas Time”.

So, yes, Thursday, end of term, anticlimax. Floods of tears etc etc. Ok, not quite. Nonetheless, a bit odd.

Friday was far more structured – it went a little like this:

Got up at 10am to make sure that the cake which we’d ‘made’ for our teachers was feeling happy and looking mightyly colourful, and as you can see, it was.

It was then off to the arts tower, laden down not only with cake, but also a few other prezzies, such as a trophy and a badge (“Best Teacher Ever”), and a pen with “BOB” written on it – the name of the persona one of our Japanese teacher’s takes on when recording skits for use in listening classes. Ohm, and a BIG box of chocolates.

Here’s the groovy 2nd year crowd, all but one of us (Warbadger included, but hiding), with our three fantastic Japanese senseis. 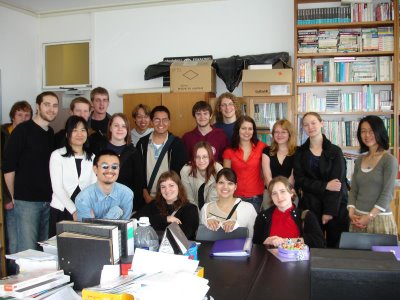 It’s great that we have made it so far without distinct warring factions having developed amongst us. Sure, not everyone loves one another to the extent that they’d want their babies, and in some circumstances that would be somewhat problematic even if they did, but nonetheless, I think overall we’re a pretty happy bunch. This will no doubt be the last time that we’ll all be together, as some will fail the exam, others will probably hate japan and drop out, or not pass the year abroadm or get married whilst there… these things happen.

After the cake presentation, we all trundled off to the pub, where, being joseph, I got drunk on half a pint of beer. Then a bit more drunk on some more drinks… until time melted away and the day became a veritable orchestra of interaction with classmates, some of whom up until Friday, I knew almost nothing about. That was great, exchanging stories and opinions, and laughter. And chips. Our venue somehow changed from the pub to the pool room in the bar at uni, and then an hour or so later the terrace out the back, where this photo was taken. By this time, a few of us had been joined by our other halfs. When *Cough* arrived at the bar she was told, “Joseph’s being very funny”, to which she thought, “ah, he must be drunk…”. 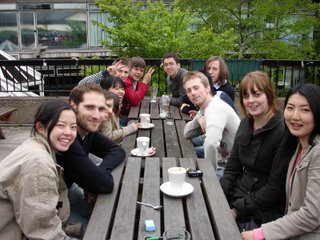 After that, heaven knows what time it was, probably evening, the 12 of us that remained trooped off down London Road to a polish restaurant run by, surprisingly enough, a Polish man who served Polish food, and played Polish songs for us on his accordian whilst we waited for our food. Mind you, all that squeezing took its toll on his wrists, and after a few minutes, he could play no more. As his accordian fell silent so screams arose from the paying customers,

Almost in tears at this sight, he begged, “If there is another accordian virtuoso in the restaurant tonight, please step forward and fill the air with music once again”

Well, how could I refuse such a desperate plea from the heart?

I have since discovered a video extract of my performance. You might have to turn your monitor on its side for this one, but such is the beauty of the music I’m sure you’ll agree, it’s worth it.

We were home by about 11.30pm I think. Apparently I didn’t talk to as many roadsigns as I did last Thursday.

Yesterday, surprisingly, I didn’t feel that bad at all, apart from having heavy feet. Having said that, I wasn’t in the mood for study either, so we decided to go to the cinema to see The Davinci Code, to see what all the fuss is about. Apparently, in Japan there were queues strecthing up to 1000 people in length outside cinemas. Thankfully we didn’t encounter such a thing at the Odean in Sheffield. In fact, when I went up to the box office the lad working there had actually dozed off! head lolling down, I had to knock on the glass to wake him up!!

Re the film itself; I’m not surprised its created such a storm, although I don’t believe that anyone has the right to censor it. Why is it such a crime to express alternative theories on history, a history that took place thousands of years ago? Ok, so I agree that in cases such as that of that historian who has frequently denied that the holocaust took place (and has since been arrested / charged in Austria where making such proclomations is a crime), where the evidence is significant, and to deny that it ever took place is denying people of their past, but when it comes to Jesus, who lived before the time of digital cameras / HandyCams, well surely the past is open to debate, and surely debate is a healthy thing as it encourages understanding.

It’s these reactionary forces within religion that I don’t like. Thankfully we don’t see too much of that sort of thing in the UK.

Anyway, the film was rather good I thought, despite the brats next to us who I’m sure went into the wrong screen, having bought tickets for “X-Men”. “Ah! I thought it had finished!” they announced to the whole auditorium at the end of each scene.

Back home, and no, study still didn’t appeal, so we watched Phantom of the Opera. Oh, except for the last 10 minutes… The DVD had been corrupted by some evil spirit, and thus we can only assume that in the end the good guys won.

Next was In the mood for love, a superb film set in 1960’s Hong Kong, telling the story of two neighbours who discover that they have something rather unfortunate in common. Great stuff, thoroughly reccomend it.

Finally, I came across The Aviator. We’ve watched the first half, will watch the second half this afternoon, after lunch at our favourite Chinese Restaurant. I quite like it actually, depsite Leonardo.