Whilst carrying out some research for my politics essay, I came across a website titled “The silliest things you’ve done whilst drunk”. That got me thinking.

I guess there have been quite a few incidents that could fall under this category, such as climbing up a traffic light (only to be pulled off the top by some policemen); sleeping in a puddle of someone else’s wee in a telephone box (as referred to a week or so back); almost getting myself killed by climbing over a 3-metre barbed-wire fence onto a busy railway line (I was also under the influence of weed and magic mushrooms at the time, a combination I do not recommend); starting a shift as a waiter in a very high-class Swiss hotel dressed in one ski-boot, one waiter’s shoe and a sick-stained white shirt; getting into situations like this: 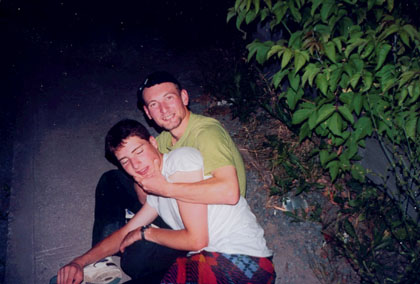 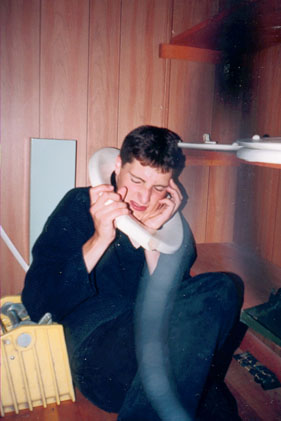 (that’s a toilet seat by the way)

Spending a night in a giant tumble drier; cycling home and falling off quite a lot (that’s happened on numerous occasions); accidentally dropping a bottle of whiskey I had hidden up my sleeve into a friend’s toilet – it went straight through the porcelain and onto the bathroom floor – I ran away without saying a word (although later anonymously deposited 160 pounds through the letter box); oh and that incient behind safeway’s supermarket, … to mention but a few.

However, I think the silliest thing that I’ve done whilst drunk occured one night when I was staying at my mate Darren’s bedsit. I woke up in the middle of the night, desperate for the loo. However, being completely out of it, I mistook his wardrobe for the toilet, and emptied my bladder over all his clothes. Jackets, shirts, trousers, socks and shoes, all were drenched.

I never was invited back there.

Thankfully, I’m grown up now. That sort of thing would never occur these days.